Oxidation of Benzoin and Rearrangement of Benzil to Produce Benzilic Acid

Turn in your highest-quality paper
Get a qualified writer to help you with
“ Oxidation of Benzoin and Rearrangement of Benzil to Produce Benzilic Acid ”
Get high-quality paper
NEW! AI matching with writer

Crude products were formed through crystallization and then recrystallized to obtain pure products. Melting points were taken of each product to prove its identity.

Benzoin is an organic compound consisting of an ethylene bridge bound to phenyl groups and with hydroxyl and ketone functional groups. The nitric acid would readily oxidize benzoin to benzil, a diketone, itself would reduced to nitrous acid, which would decompose to oxides of nitrogen and water. Additional water was added after the initial reaction to act as a base and facilitate removal of the hydrogen on the carbon that initially held the hydroxyl functional group. This indicated the removal of NO2, and generated the carbonyl to complete the oxidation.

The conversion of benzil, an α-diketone, into the salt of α-hydroxyacid by means of base treatment is generally referred to as the benzilic acid rearrangement. As potassium hydroxide was added to benzil, the stable salt, potassium benzilate, was formed. The salt was acidified by the addition of hydrochloric acid until the pH of the solution became acidic and solid benzilic acid precipitated.

The ability to be able to produce benzilic acid is vital. Benzilic acid is used in organic synthesis as a base point for preparation of glycolate pharmaceuticals.

After the oxidation of benzoin, the melting point characteristic of the product would prove that the benzil was produced. If the melting point range were narrow, it would indicate that few impurities existed in the benzil product. Again, after the rearrangement of benzil, a melting point would be taken to prove that benzilic acid was produced and how pure the final product was. Crystallization through ice bath is important in this process, so that the solid crystal product could be obtained as a precipitate from the reaction solution. After the crystals are obtained, it is important to recrystallize to remove impurities.

This allows the most accurate and precise melting point to be taken of the product and also gives the most accurate percent yield of the product, without impurity being weighed into the final product. To avoid errors, it would be best to make sure the benzil produced in the first step had a narrow melting point range. If the benzil contained many impurities, it would most likely produce inaccuracies in the next step of the process when benzil was rearranged to benzilic acid. Procedure

0.30 grams benzoin, 1.5 mL of concentrated nitric acid, and a spin vane were placed into a 5-mL conical vial with an attached air condenser. The mixture was heated in a 70°C water bath for approximately 90 minutes, while being stirred, until the red nitrogen oxide gases were no longer present in the air condenser. Afterwards, the mixture was removed from heat and transferred into a beaker that contained 4 mL of ice-cold water. The mixture was cooled in an ice bath and then crystals were collected by vacuum filtration using a Hirsch funnel and rinsed with cold nitric acid. The dried crystals were then recrystallized using 95% ethanol.

The pure benzil product was weighed and a melting point was taken. Then, 0.100 grams of pure benzil, 0.30 mL of 95% ethanol, and a spin vane was placed into a 3-mL conical vial with an attached air condenser. The mixture was heated with an aluminum block at 100°C, while being stirred, until all the benzil had dissolved. Using a pipet, 0.25 mL of an aqueous potassium hydroxide solution was added drop wise into the conical vial through the air condenser. The mixture was boiled at 110°C while being stirred for approximately 15 minutes and the reaction mixture changed from deep blue-black to brown in color.

The vial was removed from heat and allowed to cool to room temperature. The mixture was crystallized in an ice bath and the crystals were collected over a Hirsch funnel using vacuum filtration and rinsed with ice-cold 95% ethanol. The solid crystals were transferred to a 10-mL Erlenmeyer flask that contained 3 mL of 70°C water. The flask was swirled while 0.50 mL of 1 M hydrochloric acid was added to the flask. With each drop added a white precipitate formed immediately. The solution was checked to have a pH of 2, if it was not, more acid was added to the flask. The mixture was cooled to room temperature and then cooled in an ice bath. The crystals were collected by vacuum filtration using a Hirsch funnel and rinsed with ice-cold water. The pure benzilic acid crystals were weighed and a melting point was obtained.

Oxidation of Benzoin and Rearrangement of Benzil to Produce Benzilic Acid. (2017, Jan 09). Retrieved from https://studymoose.com/oxidation-of-benzoin-and-rearrangement-of-benzil-to-produce-benzilic-acid-essay 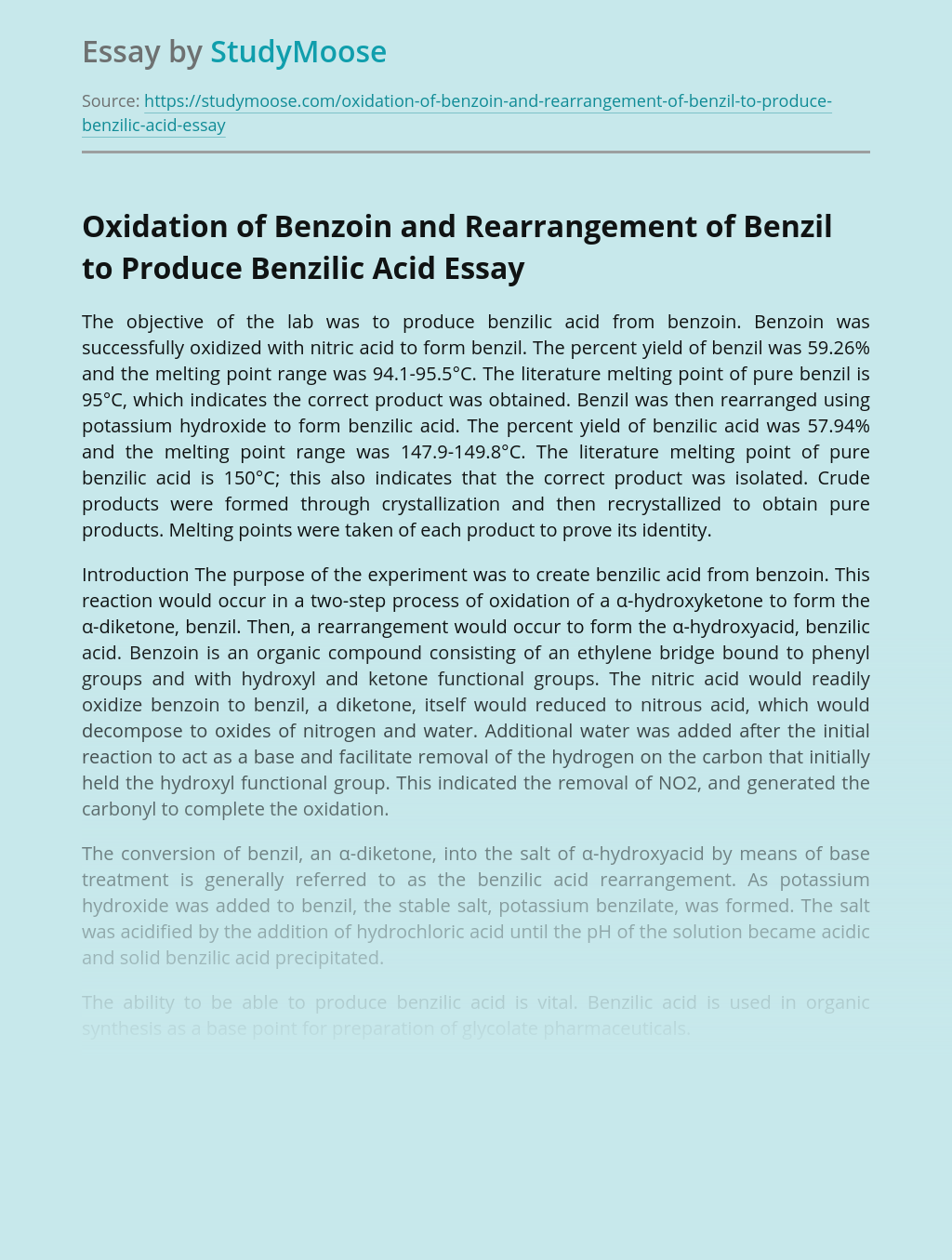 Turn in your highest-quality paper
Get a qualified writer to help you with
“ Oxidation of Benzoin and Rearrangement of Benzil to Produce Benzilic Acid ”
Get high-quality paper
Helping students since 2015
Stay Safe, Stay Original