Don't use plagiarized sources. Get your custom essay on
“ Titration Experiment ”
Get custom paper
NEW! smart matching with writer

The active part of this is the manganite ion, MnO4-1. The SO4-2 in the FeSO4 and the K+ in the KMnO4 do not react, we say they are ‘spectator’ ions and so we will ignore them.

1. Weigh the 2 iron tablets separately 2. Crush them firmly using the pestle and mortar until the tablets become crystals 3. Using a dropping pipette, add a few drops of sulphuric acid to the iron crystals and stir into a paste with the pestle 4. Transfer the iron solution into a volumetric flask carefully while using a funnel 5. Use the sulphuric acid to rinse out the mortar and pestle into the volumetric flask so all the Iron is collected 6. Rinse out the funnel as well

Conclusion: This experiment has shown that the Iron tablet does contain some Iron sulphate, about 0.184g in mass. We know this as during the titration, the Fe+2 in the FeSO4 got oxidised to form Fe+3 due to the oxidising effect of the MnO4-1. This caused the simultaneous reduction of MnO4-1, physically seen as the colour change from purple to colourless. However, the actual mass of Iron sulphate in the tablet is 0.200g. This shows that there is a small amount of error in our experiment % Error calculation: (Real result – My result/ real result) X 100 = (0.200 – 0.184/0.200) X 100

This is can be seen as two exact values were obtained for the volume of KMnO4 solution used. This shows that the errors in the experiments were minimal.| The reliability of the measurement could be improved further if about six titrations were carried out in total and the value obtained at least thrice should be used. For example, if six titrations were carried out and the values obtained are as follow; 9.7cm3, 9.7cm3, 9.8cm3, 9.6cm3, 9.8cm3 ,9.8cm3 . The 9.8cm3 value should be selected. This would make the measurement much more accurate.| Reliability of outcome| The outcome of the experiment is very good. The % error proves this point. The % error of 8.00% shows that the experiment was set up very well and the method used really works. Also, it shows that the different equipment used fitted their different purposes. | The reliability of the outcome could have been increased by repeating the whole experiment using different equipment.

For example, change the burette and simply use a similar burette. This would reveal any errors the initial equipment might have posed. If there is a huge difference in the results obtained; e.g. obtaining the volume of KMnO4 used as 12.5cm3, use another set of similar equipment and pick the two set of experiments that have results of the highest proximity | Other Issues| When sulphuric acid was added to the crushed iron crystals, not all of the crystals dissolved completely. There were some that settled at the bottom of the container. This means that while titrating, not all the FeSO4 crystals in the conical flask were in liquid form so these would be unable to react with the KMnO4 solution. This would have reduced our results as less KMnO4 solution would be required to react with the 10cm3 iron solution as some Iron crystals haven’t dissolved.

Hence, it is a systematic error.Also, meniscus was a little difficult to see as the KMnO4’s colour made the burette markings a little difficult to see. This would be a random error as reading could be taken lower or higher than what they actually are.Also, during this experiment, we are under the assumption that the iron tablet does not contain any other compound that reacts with KMnO4 in a similar way as FeSO4 would. If there is such a compound in the tablet, it would increase the result as more KMnO4 solution would be needed to react with the other compound. This is therefore, a systematic error. While using the volumetric pipette to get 10cm3 of the iron solution, as the filled pipette was being transferred to the conical flask, a drop of iron solution dropped.

This would cause the result of that particular experiment to reduce as less KMnO4 would be required since the volume of FeSO4 available is less than what it’s supposed to be. Hence, this is a random error.| This could be improved by crushing the iron tablets using grinding machines as this would make sure the crystals are as tiny as possible making more of it to dissolve in the sulphuric acid.There is not a lot to be done to improve this as KMnO4’s colour can’t be changed. The only thing to do to reduce the effect would be to make sure the same person observes the meniscus and takes the reading as they would be able to use the same technique every time, making the error more systematic than random.There isn’t a way to improve this as we do not know all the compounds and their properties in order to know if there is or isn’t such compound.If there is a drop lost, make sure the pipette measurement is carried out again. 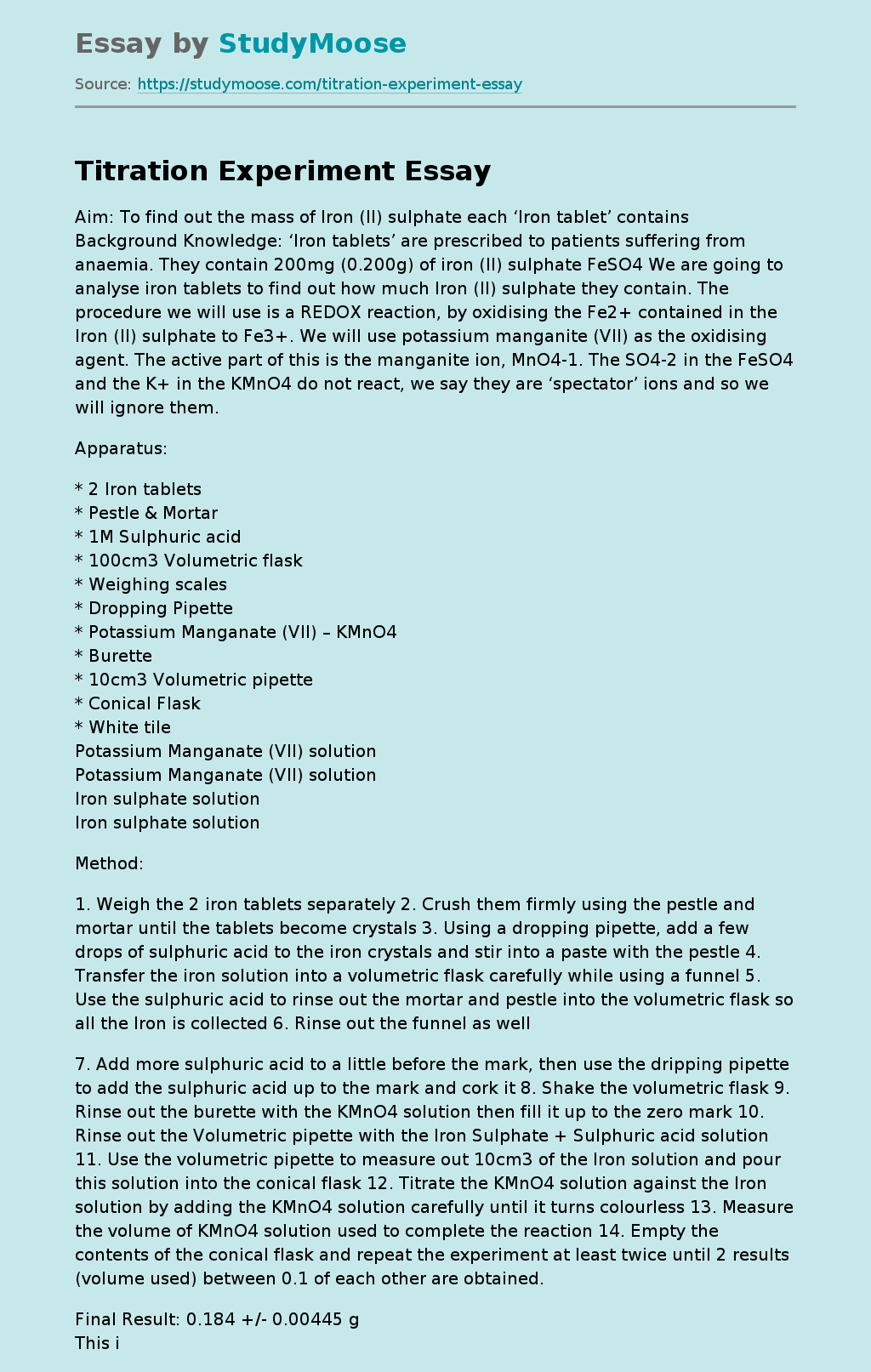