The primary goal of the experiment was to determine the structural stiffness of two cantilevered beams composed of steel and aluminum while maintaining both beams at a constant thickness and cross sectional area. The experiment also investigated material properties and dimensions and their relationship to structural stiffness. The experiment was divided into two separate parts. The results for the first part of the experiment were obtained by clamping the beam at one end while applying different masses at a specified length across the beam and then measuring deflection.

Don't use plagiarized sources. Get your custom essay on
“ Primary Goal of The Experiment – Beam Deflection ”
Get custom paper
NEW! smart matching with writer

The measuring device was set a specified distance from the clamped end. The following procedure was employed for both the steel and aluminum beam. The second part of the experiment required placing a single known mass at various lengths across the supported beam and then measuring the resulting deflection. This method was only completed for the steel beam.

The deflections from both parts of the experiment were then averaged independently to ascertain final conclusions.

The first part of the experiment resulted in a much greater deflection for the aluminum beam, with its greatest deflection spanning to an average of 2.8 mm. Moreover, the deflection for the steel beam was much less, concluding that steel has a larger structural stiffness. In fact, the structural stiffness that was found for steel was 3992 N/m, compared to aluminum, which was 1645 N/m. In addition, the theoretical values of structural stiffness for steel and aluminum were calculated to be 1767.9 N/m and 5160.7 N/m, respectively. There was a large error between the theoretical and experimental values for steel, close to 29%.

This could have been due to human error, or a defective beam. The second part of the experiment resulted in validating the fact that the values of deflection are proportional to length cubed. It was also determined that deflection is inversely proportional to the elastic modulus and that structural stiffness is proportional to the elastic modulus. Despite the fact that there was considerable error between some of the theoretical and experimental values, the experiment still proved to be effective in determining a reasonably accurate value for structural stiffness as well as verifying its relationship between material properties and beam dimensions.

Figure 1 The Fourth Bridge in Scotland, United Kingdom, an Example of a Cantilever Beam Copyright  George Gastin, at http://en.wikipedia.org/ wiki/File:Forthbridge_feb_2013.jpg.

Figure 2 Cantilever Beam of Length l, Clamped at One End and Loaded at the Other End The deflection of a beam is given by the equation δ = Fl3/3EI in m. (1) E is the elastic modulus of the material, and I is the area moment of inertia. The elastic modulus describes a material’s ability to elastically deform when a force is applied. Elastic modulus is given as stress, σ, over strain, ε. The equation below represents this relationship.

E = σ/ε in N/m (2) The area moment of inertia of a rectangle (the cross-sectional shape of the beam) is dependent upon the base, b, and height, h, of the beam and is given by the expression

δ = 4Fl3/Ebh3 in m.(4)
From the following equation, it can be seen that deflection is dependent on force, the elastic modulus, and the dimensions of the beam. Therefore, a larger load that is applied to the beam will result in a larger deflection. A greater deflection will also occur if the length of the beam is increased.
Alternatively, a larger width and height (a larger cross-sectional area) as well as a higher material stiffness will minimize the deflection. From equation 4, the force applied, F, can be written as

S = (∑i=1→n[(xi – Xave) 2 / (n-1)]) 1/2. (9)
The percentage error between the experimental and theoretical values for structural stiffness was calculated using the following expression,

The experiment was conducted in a campus laboratory. The experimentation was setup to where two cantilever beams were tested for deflection using TecQuipment’s Deflection of Beams and Cantilever apparatus. The beams were identical in geometry, but made out of two different metals, one of which is steel and the other aluminum. The beam would be inserted into the apparatus’s clamp and held in place by tightening the screw on the clamp using a hex wrench. After the beam was secured on the apparatus, the Mitutoyo Absolute displacement meter was calibrated by clicking the origin button. Next, the two experiments were conducted. The first experiment tested deflection on each metal by varying the mass while keeping the load placed at a constant length. The second experiment tested deflection using a constant mass while varying the distance of load placement from the fixed end of the beam.

Experiment 1 began with measuring and recording the width and height of each of the beams using a caliper. A beam was then inserted into the clamp fitting of the apparatus and tightened using the hex wrench. The displacement meter was calibrated to zero by pressing the origin button. A length was selected for the mass to be hung from the beam. Starting from the lowest mass (100 g, 200 g, 300 g, 400 g, and 500 g), each mass was hung using the hanger from the selected length. When the hanger and mass stabilized, the deflection measurement displayed on the meter was recorded. Three trials were conducted for each mass. After the data was recorded, the mass was removed and the meter was recalibrated to zero before hanging the new mass. The experiment was repeated using the second beam.

Experiment 1 setup procedures were repeated for experiment 2. A steel beam was used for this test. For each length (100 mm, 200 mm, 300 mm, 400 mm, and 450 mm), a 200 gram mass was placed on the hanger. Three trials were conducted for each length. When the system was stabilized, the deflection length was recorded. After each trial and test, the deflection meter was recalibrated for accuracy.

The following results were acquired and calculated from the data obtained directly from the experiment. Refer to Appendix (figures 11, 12, 13, and MATLAB Full Calculation Script). Below are the properties of the two specimens, aluminum and steel.

Note: The length for the two beams was held constant for Experiment One.

In order to determine the experimental structural stiffness, the average experimental deflections for both beams were plotted. The plots also contain the standard deviation of the experimental results and the theoretical values for comparison. Refer to figures 7 and 8.

The data was fitted using a linear best-fit line to gather further information about the experimental deflections. Using the inverse of the slope from the linear trend lines of aluminum and steel, experimental stiffness was calculated. The theoretical value of stiffness was also calculated using equation 7. Table 5 represents this data.

The figure below shows a quick representation of the theoretical and experimental structural stiffness’s for the two specimens.

Experiment 2 was conducted using various experimental beam lengths and a constant force. Steel was the only material used. The deflections were measured three times for each length and averaged. The theoretical deflection, theoretical stiffness, average, and standard deviation were calculated for each mass using equations 1, 7, 8, and, 9, respectively. Table 6 represents this data.

Table 6 Length3, Experimental and Theoretical Deflections, and Structural Stiffness for the Steel Beam

The figure below shows the relationship between length3 and displacement.

The final results obtained represent the attempt in experimentally determining the hardness value for as received and annealed AISI 1018 steel. The results revealed that the average experimental hardness for the as received steel, 96.6, is much greater than the annealed steel, 64.76, as seen in figure ##. To further strengthen these results, the measurements for both of the specimens maintained a fairly low standard deviation, showing great consistency and accuracy throughout the individual measurements. In addition, since no biased error was continuously repeated, there were no trends associated with the standard deviation, it was simply scattered. The considerable error, 28.9%, between the theoretical and experimental values of stiffness for steel could have been due to bad measurements or due to the fact that the theoretical calculation is highly idealized (see table 5).

The error associated with the aluminum beam, however, was much lower, 7.9%, even with larger standard deviations. The following conundrum begs the question that if the theoretical determination for aluminum was accurate, what caused the large amount of error inherent with the steel beam? For any further non-subjective conclusions to be made the experiment for the steel beam would have to be repeated. Nonetheless, Experiment 1 proved effective in determining fairly accurate values for structural stiffness. In addition, it was also concluded that force was linearly proportional to displacement, as shown in figures 7, and 8. Furthermore, for beams with the same dimensions, the ratio of deflections was equivalent to the inverse ratio of the two material’s modulus of elasticity. In other words, deflection is simply proportional to the inverse of the modulus of elasticity. Alternatively, it can be said that the ratio of structural stiffness between the two materials and the ratio of modulus of elasticity’s are directly proportional. The results of Experiment 1 validated these statements by showing that steel deflected much less than aluminum due to it larger value of E and higher value of structural stiffness (see tables 3 & 4). The derived theoretical equations agree with both of these statements.

Experiment 2 resulted in data being obtained by continuously changing the length, but keeping the mass and therefore the force constant. The results show that if the length of the beam was increased the deflection increased (see table 6). Furthermore, it is easily seen that the quantity length cubed is directly proportional to deflection, as shown in figure 10. Therefore the final conclusion can be made that structural stiffness is directly proportional to the inverse of length cubed (see table 6). Besides these trends, there was one other trend that was noticed. The standard deviation seemed to increase as the length was increased. This must be due to the fact that there is considerable more error associated in measuring deflection with a longer beam, as seen in table 6.

Overall, both experiments were effective in validating the primary trends within the derived theoretical equations. The experiment also accomplished the goal of experimentally determining the structural stiffness of aluminum and steel beams given a specific geometry. Though the lab was rather repetitive, it proved to be a simple and great way of supporting some of the theories and techniques acquired from the course of solid mechanics. One recommendation for the lab would be to use multiple samples of steel and aluminum in order to ensure that at least one sample is consistent and that you’re not using a sample that has extensively been tested by prior labs. This may ultimately reduce the error associated with the steel beam and the overall accuracy of the experiment. 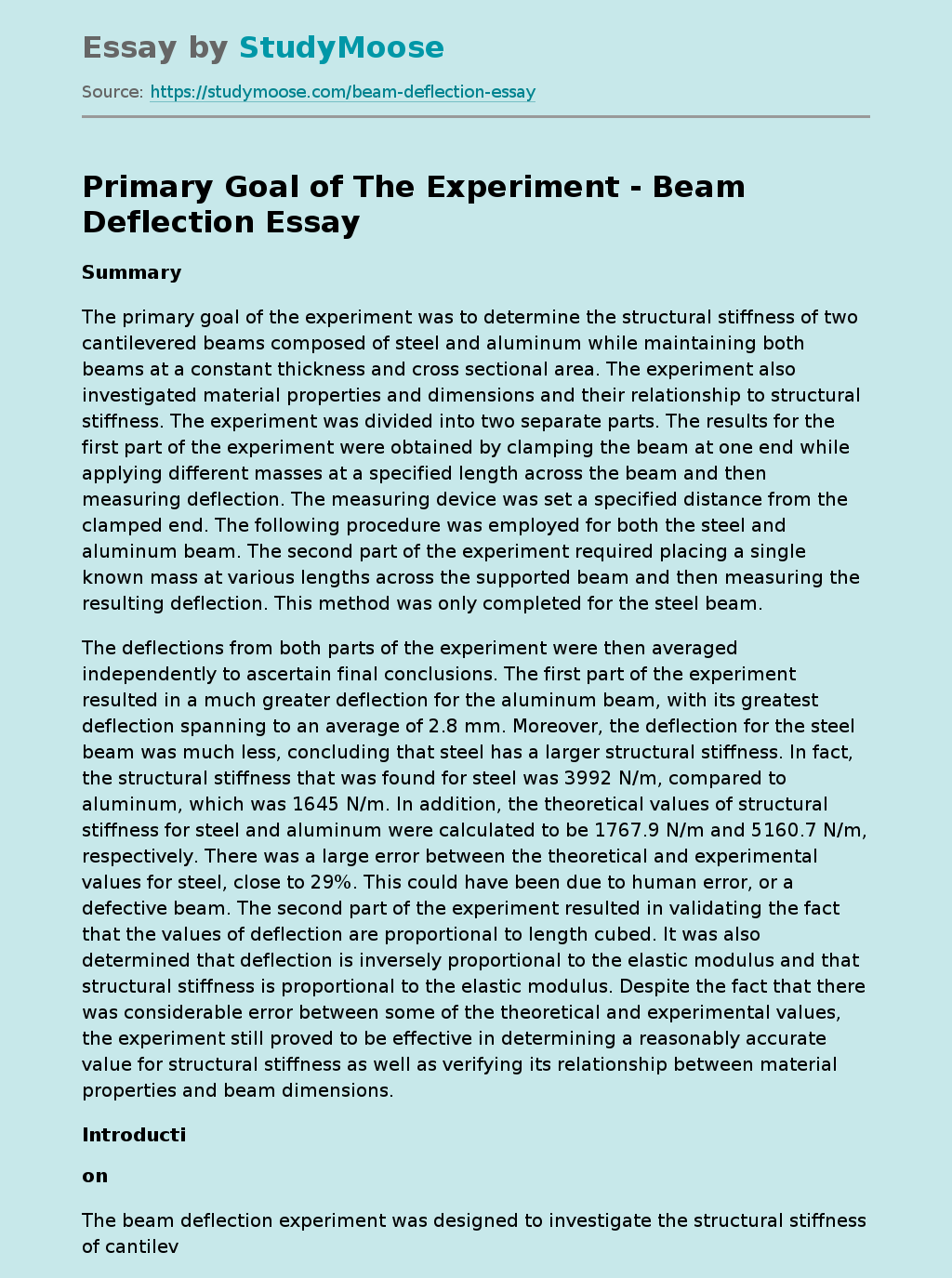