Stanley Aronowitz and William Difazio’s work on contemporary Marxist theory following and analyzing Fordism views of labor as a means to exploit and control workers is very interesting when applied to the film, “Syriana”.  Their ideas illuminate the problems with Fordism (referring to Henry Ford’s method of car production) and its technological effects on control of both workers and their time.

Creating “endless” work through technology and its reach beyond the workplace (cell phones, internet, etc…) and, also, alienation from the social processes outside of work, such as in the family and community are part of this Marxist theory.

Don't use plagiarized sources. Get your custom essay on
“ “Syriana” and Successive Marxist Theory ”
Get custom paper
NEW! smart matching with writer

Their idea, also, points to Capitalism used to exploit people, through a dogma or ideology of the need to perform this meaningless and endless work.  Aronowitz and DiFazio believe that when people are free from a menial, controlled, and exploitative environment, then only then can they be free to become part of the social processes outside of work and in the rest of the world around them.

The exploitation of all the main characters in “Syriana“, through their various jobs and the contrasting roles of other members of their family, who had more time to “play” is central to this thesis.  There were four dyads that should be highlighted throughout the film to make this point.  When freed from meaningless work, many different roles can be seen, when exploited by it we can see opposite roles.  George Clooney’s character “Bobby” is an example of a worker, who was exploited by his employer (the United States CIA).

His job life consisted of constantly working for this organization with a mention from one of his former co-workers that he has been “used” and he probably never even knew why. He states that he never did need to know.  He is used as a “fall guy” for this organization when an operation goes awry.  This exploitation is an example of what can happen when a worker is constantly alienated from all other processes going on around him.  His son, in contrast, shows interest in “playing”, in going to college, rowing, and in girls.  He claims to want a normal life, the opposite of what his father has.  But, in the end, when “Bobby” is under investigation and free to make his own choices, he chooses to do what he believes is right in saving a prince that is to be assassinated.  Only when he is free from his exploiters, can he be free to make his own choices.

Another dyad is that of “Bryan” (Matt Damon’s character) and his son “Max“.  Bryan is an energy analyst and, through Aronowitz and DiFazio’s idea of endless work, Bryan is asked to and agrees to working on his son’s birthday.  While Bryan is working, the family is playing, and this in a very strong point to this thesis, proves fatal.  His son is killed in an accident, caused by technology and its imperfection.

If it were not for both technology and endless work, the son, “Max” would still be alive.  In an interesting twist to this, “Bryan” goes on to work as an advisor for the same visionary prince that “Bobby” tries to save.  When “Bryan” is freed from his analyst job, he goes on to work for this visionary in an attempt to help change the world for the better. “Bryan” mentions the slow pace of the Persian people and how their work ethic seems different and slower.  He sees this as a sharp contrast to his position that led him to endless work and his son’s death.

Two other dyads should be examined and that is of  “Bennett” the attorney for a powerful oil company and his father and that of a Pakistani, who calls himself “Johnny” and his father.  Both of these fathers are out of work and have more time to think and play.  “Bennett” spends so much time working that he cannot see the harm he is doing, though his father has time to think and drink (excessively) and he disagrees with his son’s work.  This shows the negative side of unemployment and disengagement with civil life, which can occur if one does not apply themselves to using their capabilities.

“Bennett’s” father does show his son negative attention, which is all he can do.  Similarly, “Johnny” desires money to bring his mother to be with his father and he.  The father is shown playing and enjoying the freedom from meaningless work, while “Johnny” searches for something meaningful.  In a negative twist to this “Johnny” is recruited and exploited to be a suicide bomber and then his life does have meaning, but it is in his death.  Without this dogma of the meaning of work and the need for commodities, these dyads would not be so complicated.  Work and the idea of “meaningful” work puts a rift in these families and causes social disease (alcoholism and religious extremism). 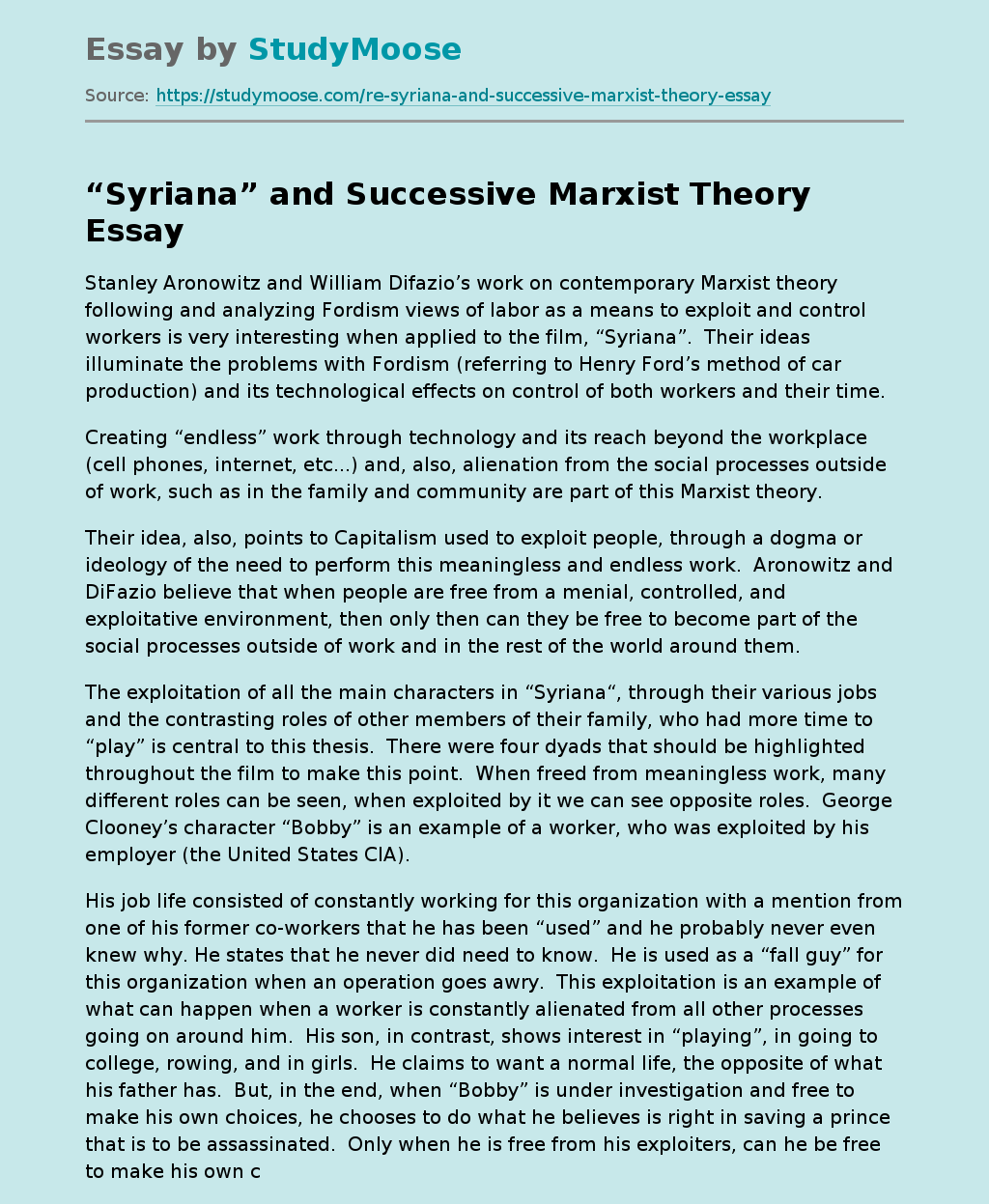