The destination of any journey is a profound realization of some kind – literally, the realization of one’s goal, metaphorically often a consciousness of one’s reality. For an individual on a mission, a quest – the arrival at the truth is the final destination. The motif of quest has been used diversely in literature from the search for the Holy Grail to the legend of the Golden Fleece. John Cheever uses the quest motif in his short story ‘The Swimmer’ to present the unusual travails of his narcissistic hero, Neddy through the different pools of society till he arrives at the emptiness of his own life, the shut-down panels of his home.

Don't use plagiarized sources. Get your custom essay on
“ Quest motif in John Cheever’s short story ‘The Swimmer’ ”
Get custom paper
NEW! smart matching with writer

The transition from the fall to experience is paralleled through the quest motif. At the beginning of the short story, Neddy is the apparently youthful, imaginative quester setting forth on his own adventure to swim the county, across a stretch of private and public pools to reach his home “in Bullet Park, eight miles to the south, where his four beautiful daughters would have had their lunch and might be playing tennis.

” (Cheever, The Swimmer) As the quest continues, there are inevitable signs of passing time (not paralleled by the physical time of Neddy’s eight-miles’ swimming journey), subtle indications of the fraying of the self-deception Neddy indulges in, the slow unmasking of the unpleasant truths of his life and the final epiphanic climax at the sight of his empty locked house in the enfolding darkness of the wintry evening.

Cheever ironically stands the traditional quest on its head. The legendary hero leaves his home and hearth, setting forth on a road of trials, overcoming hurdles, and finally achieves success in the form of a treasure.

As defined by Neela Mookerjee in her essay, The Long Winding Road, the hero begins his quest and starts to encounter difficulties that lie along the way. One such meeting is with the Other. The Other, often described as the hero’s alter-ego or the hero’s dark side, reflects the personality traits which the hero does not want to acknowledge as being present in himself. Because he finds this figure so repugnant, the hero often tries to deny any commonality between himself and the Other.

Neddy Merrill, “the legendary figure” (Cheever, The Swimmer) is the wealthy elite socialite who starts the sunny day “breathing deeply, stertorously as if he could gulp into his lungs the components of that moment, the heat of the sun, the intenseness of his pleasure. ”(Cheever, The Swimmer) In his own mind, he prints his own trail of pools, the swimmer in his own world till the self-pretense is stripped away from the eyes of the protagonist as well as the readers ‘swimming’ along with the narrative as he confronts his Other reality.

Often described as an “anglophile” , John Cheever depicts the social milieu of Merrill in its suburbanite languid pace – the Grahams, the Hammers, the Lears, the Howlands, and the Crosscups, then the Bunkers, the Levys, the Welchers, and the public pool in Lancaster. Then there were the Hallorans, the Sachses, the Biswangers, Shirley Adams, the Gilmartins, and the Clydes. Neddy is portrayed as the pilgrim seeking an unexplored route to the known end with the belief that “friends would line the banks of the Lucinda River.

”(Cheever) The upper class suburbanite society depicted is a world of self-indulgence – a world where one could lounge about in naked pleasure, an everlasting party with the same faces, rounds of drinks and ensuing hangovers, and even the same serving bartenders. From the surfeit of drinks/hangovers in the opening paragraph to the Communist label as a marker of reformist zeal, even the contrast between the private haven of one’s own pool vis-a-vis the disgusting commonness of the public pool – Merrill’s class is painted visually for the reader.

The social behavior towards Neddy subtly changes from the courteous welcome of Mrs. Grahams to the patronizing sympathy of Mrs. Halloran, to the rude reaction of the Biswangers at his intrusive presence in their noisy party. Neddy tries to integrates himself into the texture of the social class he once belonged to, but as the text develops, he is portrayed as an invasive element, an opportunist for free drinks and begging loans. The color of the quest thickens, darkens as the slow realization of the erstwhile insider being the unwelcome outsider hits home.

Quest motif in John Cheever’s short story ‘The Swimmer’. (2017, May 08). Retrieved from https://studymoose.com/quest-motif-in-john-cheevers-short-story-the-swimmer-essay 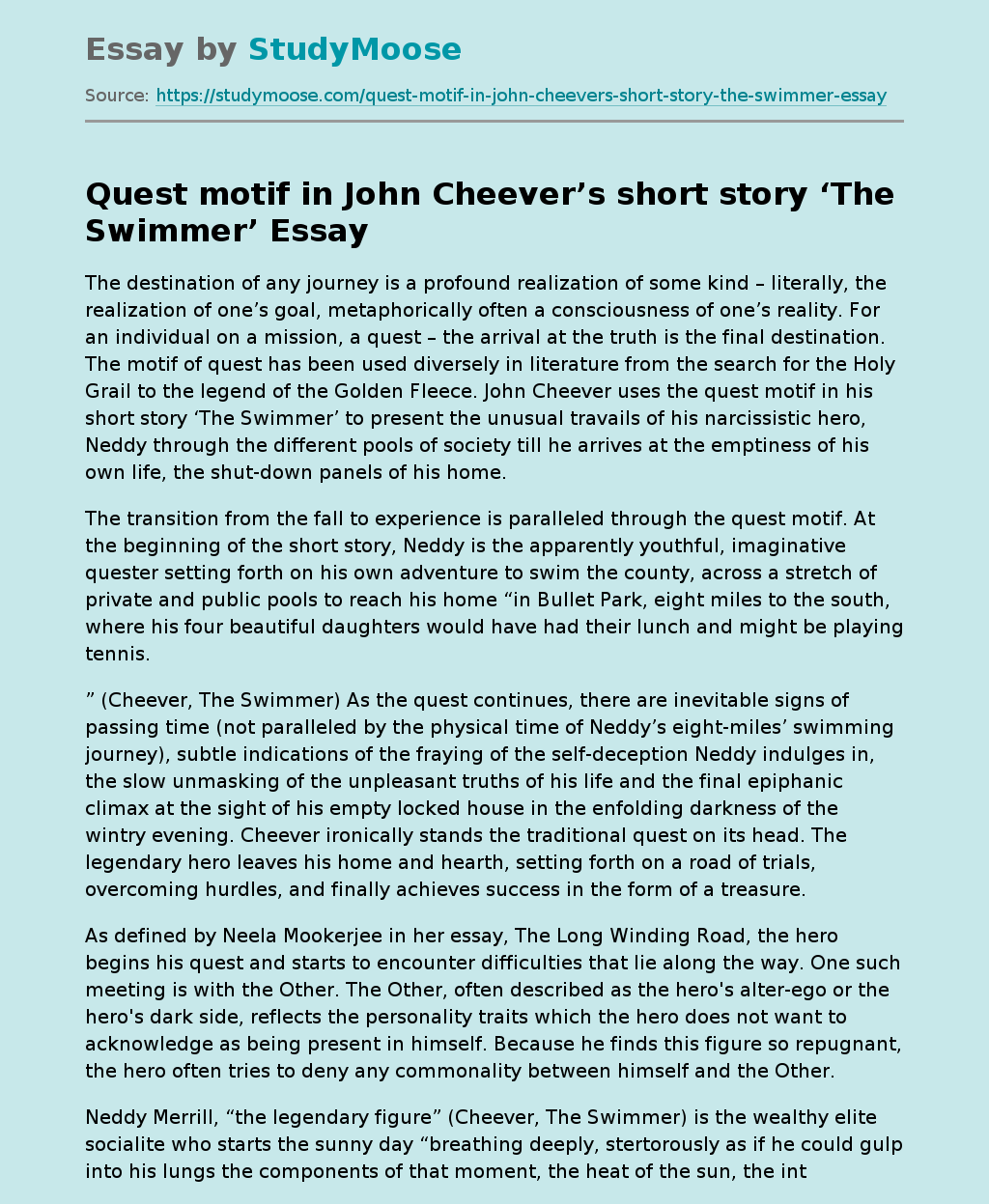