Nature, a component of life that overlooks the action of every living thing, has not only a peaceful ambiance but a fierce and harsh essence. Throughout the story of Antigone, the motif of nature is effectively used to create an emphasis on the strength of fate, to show the foreshadowing of events, and to reflect the strong will of characters. Throughout the story, Sophocles references nature an ample amount of times while discussing the strength and inevitability of faith. This motif of nature is used to allow ignorant characters to understand the power of fate.

Don't use plagiarized sources. Get your custom essay on
“ Nature Motif In Play “Antigone” ”
Get custom paper
NEW! smart matching with writer

In addition to signifying the strength of fate, nature is used accordingly when a harsh or gruesome event is approaching. This is used to add onto the harshness of the event while relating it back to the harsh aspect of nature. On the other hand, Sophocles also shows the other aspect of nature by highlighting the character’s strength and will power, by showing the positive characteristics of nature.

This motif of nature is used in diverse ways throughout the book Sophocles distinctly created these three different uses for the motif to feature the attributes of faith, characters, and the story’s events.

Primarily, the consistent presence of the motif of nature allows for Sophocles to reveal the inevitable and powerful characteristics of faith while exposing the ignorance of characters who refuse to believe in faith’s power. Sophocles initiates the use of the nature motif by creating this sense of ignorance in the main character in the story : Creon.

Creon’s interaction with Prophet Tiresias reveals his stubbornness to accept the truth. Tiresias senses this stubbornness even before he reveals the truth while stating that, “ All men make mistakes, it is only human … [but] Stubbornness brands you for stupidity – pride is a crime. (Lines 1132 – 1136)” Despite this advice, Creon goes on to become furious when he first hears that he is the sickness in Thebes. Tiresias claims that “ You are the one who’s sick, Creon, sick to death (Line 1167).” to that Creon replies, “ I am in no mood to trade insults with a seer (Line 1168).” The conversation ends with Tiresias claiming that Creon was, “calling my [Tiresias] prophecies a lie. (Line 1169).” This discussion reveals the disregard Creon has toward the Prophecy. Since Creon is established as ignorant towards the truth, Sophocles goes on to discreetly reveal the true powers of fate: “ The gods have rocked a house to its foundations the ruin will never cease, cresting on and on from one generation on throughout the race like a great mounting tide driven on by savage northern gales …” (Lines 660) “ Taking the storm’s onslaught full-force, roar, and the low moaning echoes on and on …” (Lines 665). These two quotes demonstrate a hypothetical example of how God’s power is unstoppable and once faith is set on completing a task it is inevitable. Once this evident unstoppable nature of faith is established, Sophocles demonstrates the power of fate by allowing Haemon to state “ You’ve seen trees by a raging winter torrent, how many sway with the flood and salvage every twig, but not the stubborn—they’re ripped out, roots and all. Bend or break. (Lines 796-798)” Once again, this motif of nature is used to demonstrate that the only people who survive the harsh inevitable fate, are the ones that are flexible and able to adapt to the change whereas the stubborn ones, like Creon, are destroyed. Thus, Sophocles has sequentially established Creon as an ignorant character and then used the motif of nature to demonstrate the true capabilities of faith.

In addition to establishing the true capabilities of faith, Sophocles then goes on to use the motif to establish the strong willed characteristics in the main character : Antigone. The motif of nature is used to express the wild and strength present in Antigone’s nature. This is seen first when Creon is trying to make Antigone realize that what she did was a mistake, however she does not budge one inch from her argument that what she did was morally right. The discussion ends with, “No? Believe me, the stiffest stubborn wills fall the hardest the toughest iron, tempered strong in the white -hot fire you’ll see it crack and shatter first of all. And I’ve known

spirited horses you can break with a light bit —proud, rebellious horses. There’s no room for pride, not in a slave, not with the lord and master standing by … (Line 530).” This quote clearly shows how it describes Antigone as having a spirit like tough iron however, Creon claims that at one point they will break and fall as even the most “ spirited horses” can’t do anything with a master around, referring to Creon. In addition to this quote, her anger to Creon’s actions and her love toward his brother is shown when, “ And after the storm passed—it seemed endless— there, we saw the girl! And she cried out a sharp, piercing cry, like a bird come back to an empty nest, peering into its bed, and all the babies gone … (Line 470)”. This quote reveals to us how much anger she has toward the treatment that her brother has been put in, and to show her true love and anger she is compared to the viciousness of a motherless bird. These references to nature show how precisely Sophocles planned in advance the structure of the poem to reflect the motif of nature in the characteristics of Antigone.

Furthermore, Sophocles uses the motif of nature to characterize harsh and brutal events by comparing them to the harsh characteristics of nature. These harsh characteristics of nature are also used to describe characteristics which are displaying such harsh or negative behaviors. For example Creon does this when he claims that Antigone was trying to overthrow him, “ You— in my own house, you viper, slinking undetected, sucking my life-blood! (Line 600).” This quote shows how he claims that her actions of trying to bury her brother and ‘attempting’ to overthrow him are seen as harmful thus relating it to a viper whose connotation breathes negativity. Besides relating harsh characteristics of nature to characteristics he also relates them to events “ She, with her own dear brother lying in his blood — she couldn’t bear to leave him dead, unburied, food for the wild dogs or wheeling vultures. Line (780).” This example is when Antigone’s actions are seen as motives to save her brother from the relentless aspects of nature. These relentless aspects are represented by the motif by using examples of wild animals such as wild dogs and vultures. Nearing the end of the story, when Antigone is being imprisoned this scene is overseen by the motif of nature by including the tomb to be placed in the mountains on rocks. When Antigone shouts, “ O tomb, my bridal-bed—my house, my prison cut in the hollow rock, my everlasting watch! (Lines 980),” it reveals how this scene is specifically placed around a harsh natural scene to emphasize the harsh nature of nature as well as the event that is occurring. These harsh characteristics and nature, as well as it’s longevity, and the consistent use of this motif emphasizes the harshness and creates a tension of struggle and agony throughout the piece.

Nature, which can be seen in many books throughout literature, is used essentially to fulfill three main points in which Sophocles has planned. The motif of nature is first used to create a sense of significance for faith. This is done by first establishing Creon as an ignorant character who is unwilling to accept fate, and then using nature to create a sense of importance to Faith. Sophocles then uses the motif to highlight the essential and most prominent characteristics of the main character of Antigone, which are the wild and strong-willed nature. Furthermore, to add even more significance to this persistent motif Sophocles uses it to foreshadow and describe harsh events to highlight how Nature, on the one hand, can be wild, strong-willed, and spirited however, on the other can also be very fierce and ruthless. Trees, vipers, wild-dogs and rocky tombs are all components of how the motif of Nature is used to bring Antigone to another level of literature. 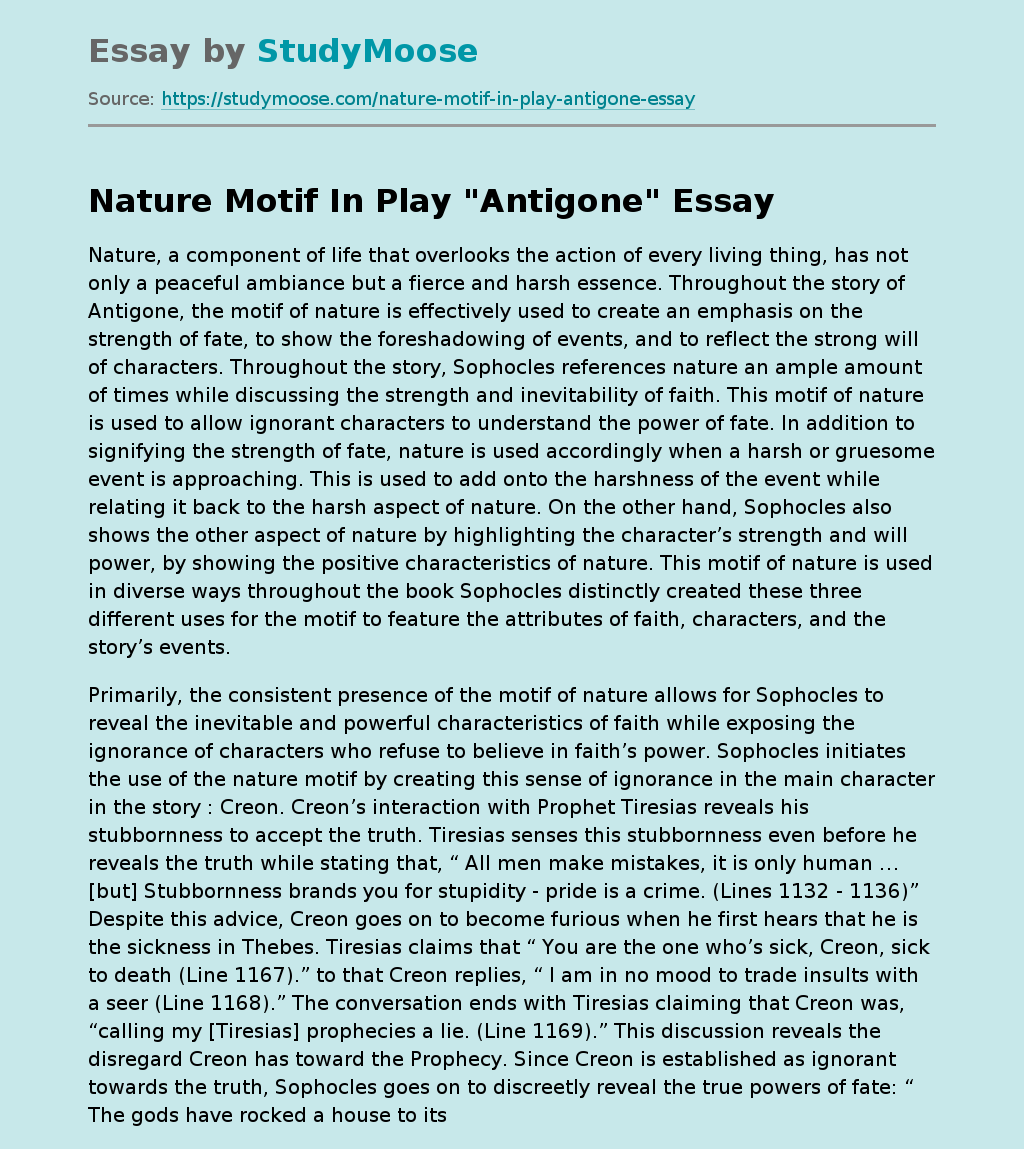