The concept of Persuasion has been developed between the 1940s and 1950s after studies aimed at defining the optimal persuasive effectiveness of Propaganda, being it political or an advertising campaign. Like the Hypodermic Needle Theory, it considered audiences passive although the scope of a campaign switched from manipulation into persuasion. Researches on Limited Effects of mass communication demonstrated that messages are successful only if they embed the same opinions of their receivers. Therefore, the focus of any campaign has to be on individual psychological factors.

Don't use plagiarized sources. Get your custom essay on
“ Persuation in Communication ”
Get custom paper
NEW! smart matching with writer

Unlike the Hypodermic Needle Theory, Persuasion Theory considers the Stimulus-Response model as interposed by a filter: individual’s specificities, i.e. psychological characteristics of an individual. In this perspective, persuasive messages are thus able to activate an attitude change that can modify behaviors of consumers, voters and individuals in general.

Unlike the Play Theory of Mass Communication, the concept underlying persuasion is that information is provided to influence receivers’ behaviors. Once they had developed the concept of persuasion, researchers on Persuasion Theory focused on the audiences and the content of messages.

4 psychological factors of audiences have been identified: An audience is interested in getting information. To reach a bigger audience (including those who seem to be not interested in certain information at that moment) the message has to be designed to capture people’s attention.

Selective exposure. People are more interested in a message if it supports the same opinions and ideas that they already have. Selective perception. Audiences select information that is right for them, and a message can be voluntarily misunderstood or simply not caught if audiences haven’t chosen to receive that piece of information. A receiver perceives opinions embedded in a message according to

Regarding the message, Persuasion Theory identified 4 factors that facilitate and reinforce the persuasion process: The credibility and reputation of the communicator. It implies the acceptance of the message by a receiver: the level of persuasion is low if the producer of the message is considered not credible or reliable. The order of statements. In this respect there are two different schools of thought: some consider it more effective to put opinions supporting a defined position at the beginning of the message transmitted (primacy effect); others sustain the opposite (regency effect). Completeness of statements.

If receivers are not in favor of a certain opinion, the persuasion increases when a message contains both supporting and contrasting statements regarding the opinion. If receivers agree on a certain opinion or are not knowledgeable or educated, it is better a message includes only pros of the opinion supported. In any case, it has negative effect in terms of persuasion if any relevant topic about an opinion is omitted in the content of the message. Announcement of conclusions. If a receiver is interested in a message it is better not to barely state the conclusions of the message, but to leave them implicit.

Persuasion Theory can be applied in:

Politics: to promote certain candidates, persuade voters to switch their preference, convince masses about needed changes or about the validity of certain political commitment for society.

Business: in advertising, to position products or services in consumers’ mind, to persuade prospects to switch supplier, to create a need for new products, to sustain sales of cash cows businesses, to change organizational culture, to support or implement a change project. Conflicts and negotiations. Strengths of Persuasion Theory.

The main advantage of Persuasion Theory is that it offers cost-effective approaches for various uses. It can help in many different kind of situations: from resolution of conflicts to solve organizational, advertising, sales and marketing issues, but can also help in interpersonal relationships. Limitations of Persuasion Theory.

An authoritative source of limitations of Persuasion Theory is a book “Power and Persuasion: Ideology and Rhetoric in Communist Yugoslavia: 1944-1953” from Carol S. Lilly. The author analyzed the most frequently used Persuasive Techniques to sustain a long-term cultural transformation of society. Lilly’s conclusions are: 1) Persuasion is most effective when a communicator builds on existing values and beliefs. The attempt to change people’s values or create new ones has proven to be highly ineffective. It is often impossible to radically transform an existing culture. 2) Since persuasion is predominantly utilized in newspapers, radio, television, education and arts, those who don’t enjoy these tools are less likely to be persuaded. 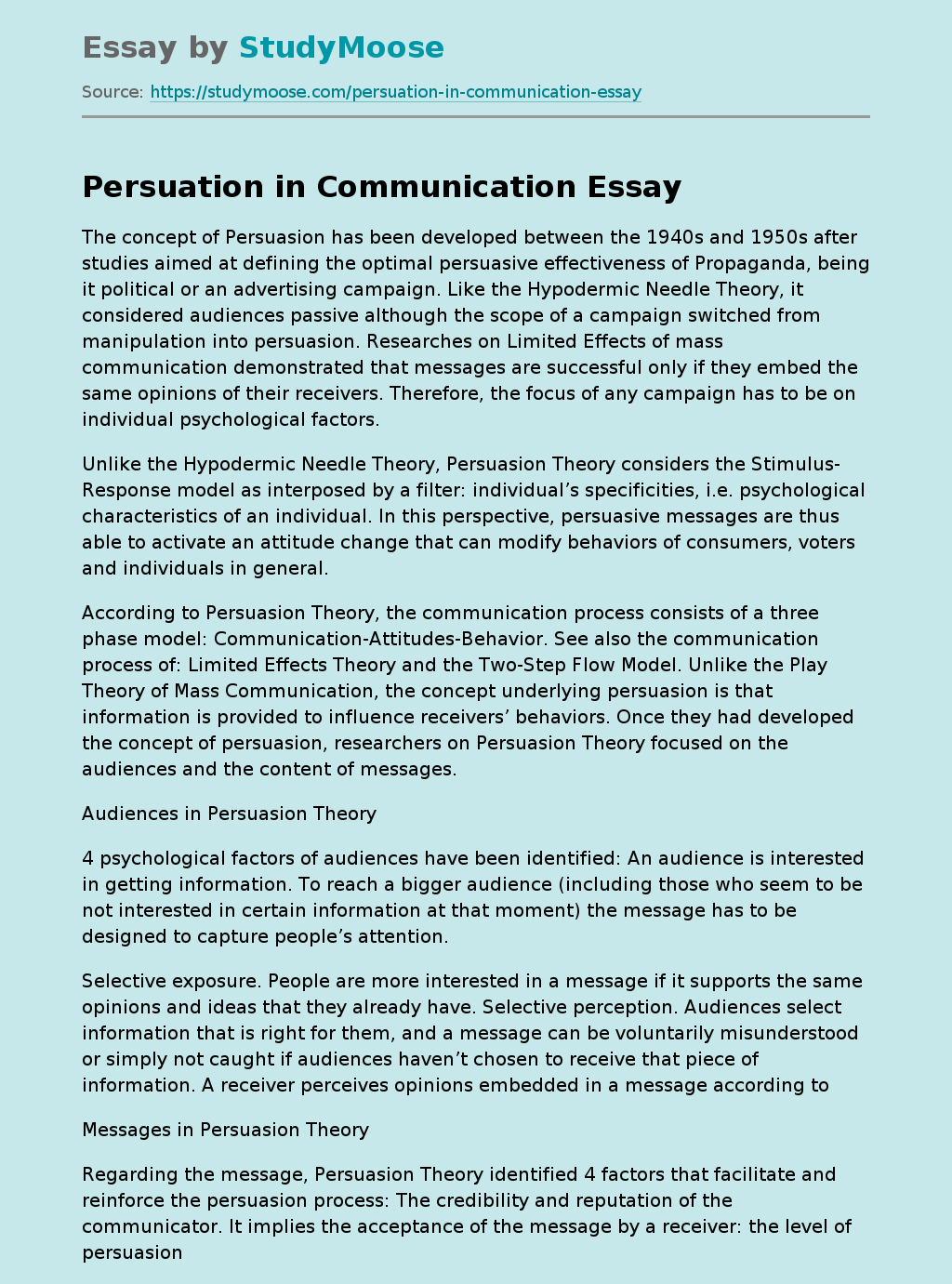