"No Sugar" by Jack Davis

The stage drama No Sugar, by Jack Davis explores the bad treatment of minority groups and their responses to this treatment. The performance set in the 1930’s presents the Milimurra family who are the minority group fighting against the injustices inflicted on them by white authorities. No Sugar provides a voice for the aboriginal people, confronts European Australians with the past, restores Aboriginal culture and pride and explored the value of equality. All these ideas are used as a way to convey its message to the audience.

Don't use plagiarized sources. Get your custom essay on
“ “No Sugar” by Jack Davis ”
Get custom paper
NEW! smart matching with writer

It appears that the stage performance of No Sugar provides the Aboriginal people with the voice they have lived without for decades. The Milimurra family are used in the play to represent the voice of the Aboriginal people who stand up against white authority. Milly and Gran who refuse to give in without a fight, go to the Sergeant and confront him about the reasons why their rations have been cut, and push for him to provide them with blankets.

Characters such as Topsy and Billy are representations of those Aborigines who did not fight for their rights. These characters bowed down to white authority, Billy who does not speak his own language, but broken English is happy to work for the white authorities tracking down members of his own race who escape their clutches.

Milly’s response to the Sergeant when he tells her that her problem is she has three grown men budging off her, who are too lazy to work, is by asking him “Where they gonna get work?” she asks the Sergeant “Do you want em to work for nothing?” and Gran backs her up by saying “Their not slaves you know Chargent!” The staging is also used as an added technique to provide the aboriginal people with a voice, the white colonies are positioned on the outskirts of the stage and the Aborigines are given center stage, as a means to respond to their mistreatment in Australian society so many years ago.

No Sugar also confronts the European Australians with the past, the truth about the treatment of Aborigines and the injustices committed against them. Mary Dargaru exposes the treatment of Aboriginal women to the audience, through her conversations with Joe and her fears of working for Mr. Neal at the hospital. She tells Joe that when Mr. Neal asks a girl to work at the hospital it means he wants that girl for himself. The audience also learns through Mary that this is a common tragedy faced by Aboriginal girls at the time. After the birth of her child Mary is fearful that Matron will take her child away and provide it with the same fate as her friend Lillian’s baby, who was buried in the pine plantation. In order to escape these injustices Joe and Mary run away to Northam, when caught and returned to the Moore River Settlement, Mary responds by refusing to work at the hospital. Mary’s response gives her the desired outcome she wanted, but at a cost, Mr. Neal beats her, but not before Mary tells him “Go to hell.”

The stage performance restores the Aboriginal people with their pride and culture which were stolen from them so many years ago. Jimmy in Act one reveals the resentment the aboriginal people feel towards the whites. When Joe reads the newspaper article about the Australia Day celebration, Jimmy responds by saying “them bastards took our country and them blackfellas dancing for em bastards.” Later in the play the males of the Milimurra family engage in a Carobaree, this shows that they are not prepared to give in to the white authorities and allow them to take their culture and identity without a fight. The aboriginal people also use their own language throughout the play, indication to the audience their perseverance and determination not to give in.

The stage performance of No Sugar greatly explores the value of equality, presenting a contrast to the ideal equal world, and conveying the injustices and inequalities faced by the aboriginal people. It shows how the unemployment allowance for aboriginals was 2 shillings, whilst everyone else received 6 shillings. Use of props is also an affective medium in portraying certain inequalities, for example the sign for the Aboriginal department reads “The department of fisheries, wildlife and Aborigines”, this department also has two separate entrances, one for Aboriginals and one for Europeans. The Aboriginal people are not even allowed to consume alcohol.

Jimmy responds to these inequalities, by ignoring the signs and goes to talk to Neville when told to wait around the back he refuses to budge and waits until they give the train ticket he wants. Jimmy also chooses to ignore the alcohol restrictions. In doing so he is put on trial which arouses another injustice. His trial is not a fair one and the Justice of the Peace conveys the attitude that he would rather be somewhere else. Jimmy does not stop, he responds to further injustices in the courtroom by talking out of turn and attempting to defend himself, he also turns up late to the trial showing that he is not intimidated by white authority.

The stage performance of No Sugar presents the Aboriginal people as they were treated in the 1930’s they are presented as being an inferior race and this is an accurate representation of their treatment during this time period. The performance conveys the groups responses to their poor treatment and is used as a means to finally give these people their much deserved voice, confronting Australian with the horrible truth of the past, restoring culture and pride to the Aboriginal people and exploring the value of equality. 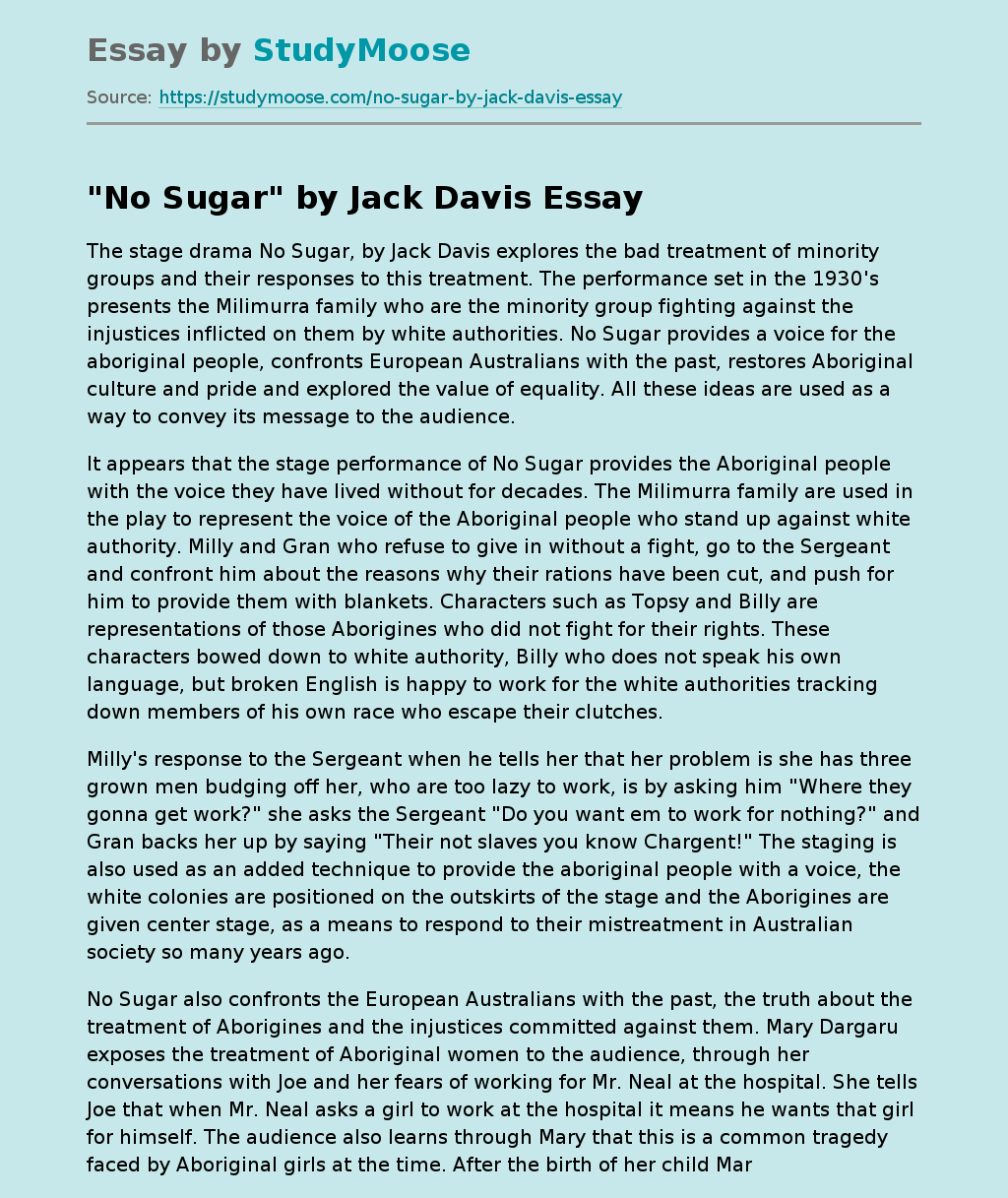