Jack Davis’s poems present a passionate voice for the indigenous people; it explores such issues as the identity problems, the wider sense of loss in Aboriginal cultures and the clash of Aboriginal and White law. This can be seen in the poems “Desolation” and “The First Born”. Both of the poems clearly emphasises the plight of the Aboriginals in today’s society. Through the first poem “Desolation”, the title already hints the poor situation they are in, with complete no recognition; they are devastating, isolated and miserable.

Don't use plagiarized sources. Get your custom essay on
“ Australian Culture in Jack Davis’s Poems ”
Get custom paper
NEW! smart matching with writer

By using first person in the Aboriginals voice, the poem is full of anger towards the whites who invaded their homes and ruined their balance with the land. “You have turned our land into a desolate place.” This was the first sentence of the poem, it is directly addressing to the reader suggesting the “white” people, this emphasises their enmity for losing their “mother” land which they have been living on for more than 40,000 years.

In this piece, Davis also expressed their true conditions, feelings and emotional thoughts due to the whites’ invasion. “What are we? Where are we?”

The voice is confused, helpless; they are not recognized, they are forced to live in a new way, in the white’s way, which is a torment for them to adapt and accept. “We are tired of the benches, our beds in the park. We welcome the sundown and heralds the dark.” It is suggesting they are homeless, they have not just lost their tribal life, land and rights, they do not even own a shelter for themselves, their way of living and culture have been complete wiped out by the whites, no longer have freedom, so disappointed to the society that they have no hope for tomorrow.

Davis wrote this poem in the Aboriginal people’s voice, they are angry for what they are suffering, but they are also standing up for themselves, a better life and their justice, rights and recognition.

The second poem “The First Born” also emphasises the poor situation the Aboriginals are in. Just like the first poem, it is also written in first person, but in a different angle, the “mother” land’s perspective. It uses lots of emotive language and negative words to present the enmity and hatred towards the whites “you whom I bore after”, whereas the first poem stated out their situation and true thoughts to emphasis the point. This poem used personification to show the inseparable connection between the Aboriginal people and their land as a mother and her child, “They were formed of my dust”. 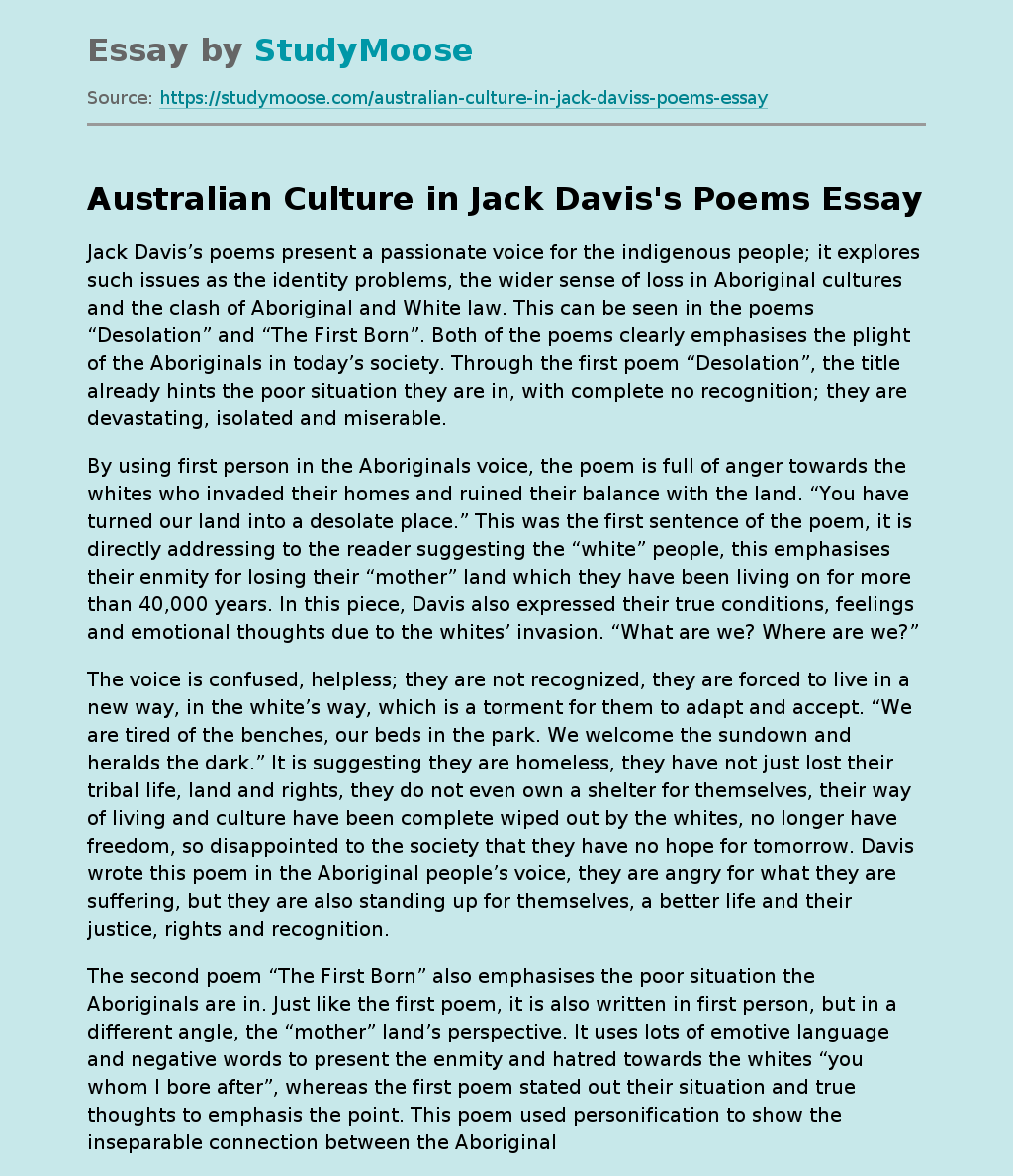