My name is Hay Mann Zaw. I’m a second year student majoring in Social Science at Chiang Mai University. I am a Myanmar who has been living in Mandalay, Myanmar my whole life until I came to study in Chaing Mai. I am very proud of my hometown and it makes me a nationalist in some ways. Mandalay is also the hometown of both of my parents. The great, great grandfather from my mother’s side was the first engineer of Myanmar, he was sent to study in France during the pre-colonial period, 19th century.

Don't use plagiarized sources. Get your custom essay on
“ Nation and Nationalism ”
Get custom paper
NEW! smart matching with writer

His son, my great grandfather was the one who translated Geometry from English to Burmese. My grandfather, himself was the activist in colonial period that sacrificed his left leg for the country. Because of my ancestors and the way I was educated, I am positively sure that Nationalism is in my blood. My ancestors had been living and passing bloodlines in Mandalay. It becomes a part of my life not only as hometown but also as something to be proud of.

The education that Government provides in Myanmar is making history of Myanmar as compulsory subject. Basically, it promotes the culture and only the greatness of Myanmar Kings and Kingdoms. We are taught to look with full of pride at our pre-colonial history. Also Myanmar is the habitat of various ethnic groups; the definition of nationalism can be different for each ethnic group. “Nationalism is an ideology about individuated being. It is an ideology concerned with boundedness, continuity, and homogeneity encompassing diversity.

It is an ideology in which social reality, conceived in terms of nationhood, is endowed with the reality of natural things”. (Richard Handler) Before I make further explanation about Mandalay, I would like to describe briefly about Myanmar/Burma.

The country was colonized by the Britain from 1885 to 1948 and got independence on 4th January 1948 by General Aung San. Myanmar is well-known for two person, 1991 Noble Peace Prize Winner, Daw Aung San Su Kyi and former UN secretary U Thant. The Official full name is called The Republic of the Union of Myanmar that was changed from the Union of Myanmar in 2008 as the Burmese constitutional referendum but only known among other nations as Myanmar/Burma.

Being called as Burma, the Myanmar government sees this as insulting. (David I. Steinberg, 2010) Geographically, Myanmar is the largest of the mainland Southeast Asia states. Home of estimated 63million people, is divided into seven divisions and seven states. Back in history there were several democratic movements, namely 8888 uprising, 2007 saffron revolution. Myanmar is also known as the longest civil war in history. For more than 60 years, there has been war among the Myanmar military and different ethnic groups. At this moment, Myanmar is watched by the world on its transformation.

Mandalay, the heart of Myanmar, is the last royal capital city, lying on the east bank of the Irrawaddy River. Mandalay is not only the center of Burmese culture but also the vital part of Buddhism. 60% of Buddhist monks in Myanmar are residence of Mandalay. The population of the city is 1.3 million. Just more than 150 years old city, Mandalay is comparatively young as the result of the short time period of the last Kingdom of Myanmar. The name of the city got from a hill nearby called Mandalay Hill also known as the holy mount.

The legend goes when Buddha visited he prophesied that a great city would be founded at its foot. Following the prophecy, King Mindon of Kongbaung Dynasty founded the city in 1857. “A nation that cannot control its borders is not a nation.” ― Ronald Reagan .Myanmar Kingdom stopped after the loss of the Third Anglo-Burmese War. The area around Mandalay was the site of many Capitals for centuries. Sagaing, Amarapura and Innwa are three ancient cities resided by Myanmar Kings. Though the period of glory was shot, lots of monuments, pagodas, tradition and culture have been growing with the city.

When talk about Mandalay, the first image people get in their mind is the royal palace. The palace constructed only with teak was bombed and burnt to the ground during the Second World War. It was reconstructed again in 1989 with insufficient budget by using concrete. Also called the glass palace is protected by 2km long walls with three gateways in each of the way. 64m (210 ft) wide moat is surrounding the walls. Several monuments are lying
inside of the palace such as glass palace, hlutt taw (court in English), watch tower, clock tower and king’s bathing pool. Mandalay Hill, itself is also one of the images of Mandalay. The breathtaking scene of the hill attracts many people. Kuthodaw Pagoda was built during the reign of King Mindon in 1857. Lying at the foot of the Mandalay Hill, the pagoda contains the worlds’ biggest book, the entire 15 books of Tripitaka are inscribed on the 729 marble slabs slabs. Monuments like Mahamuni Pagoda, Kyauktawgyi Pagoda, Shwenandaw Monastery,Atumashi Monastery are also the pride of Mandalay.

The true tradition and culture of Myanmar people still can be seen everywhere in Mandalay. We also believe that culture we got from our ancestors shape us nationalist. I would like to emphasize on two seasonal festivals that highly promotes Burmese culture. The first one is called Taungbyone Pwe(Nat Pwe), Taungbyone(the small town) which is in the north of Mandalay and Pwe means festival in English. The popular festival is about people from different places across the country come to worship the spirits (Nats). The sprits are divided into two groups, great spirits and regular ones. Many Myanmar people believe that by worshipping the spirits, they will bring them good luck and good things. The festival is held annually exactly at the same dates.

The second one is the tradition of Mandalay, small festivals are being held township to township in circular across the whole town. The very first festival starts in October and then place to place till the end of January. The Amazing fact is only at those festivals people sell many variety of traditional foods. Zat Pwe (Myanmar opera or ballet) is usually played at the festivals the whole night. In conclusion, these unique traditions give me the sense of belonging to a specific place and the affection towards it. They also shape my life and make who I am now. People who are not insider will not feel the same and hard to understand all these traditions. It is understandable because traditions and cultures can witness and feel only by the insiders. Moreover, they are the factors that make each nation different and unique.

The art of Myanmar Zat Pwe, Retrieved from website
http://www.myanmars.net/myanmar-arts/myanmar-zat-pwe.htm 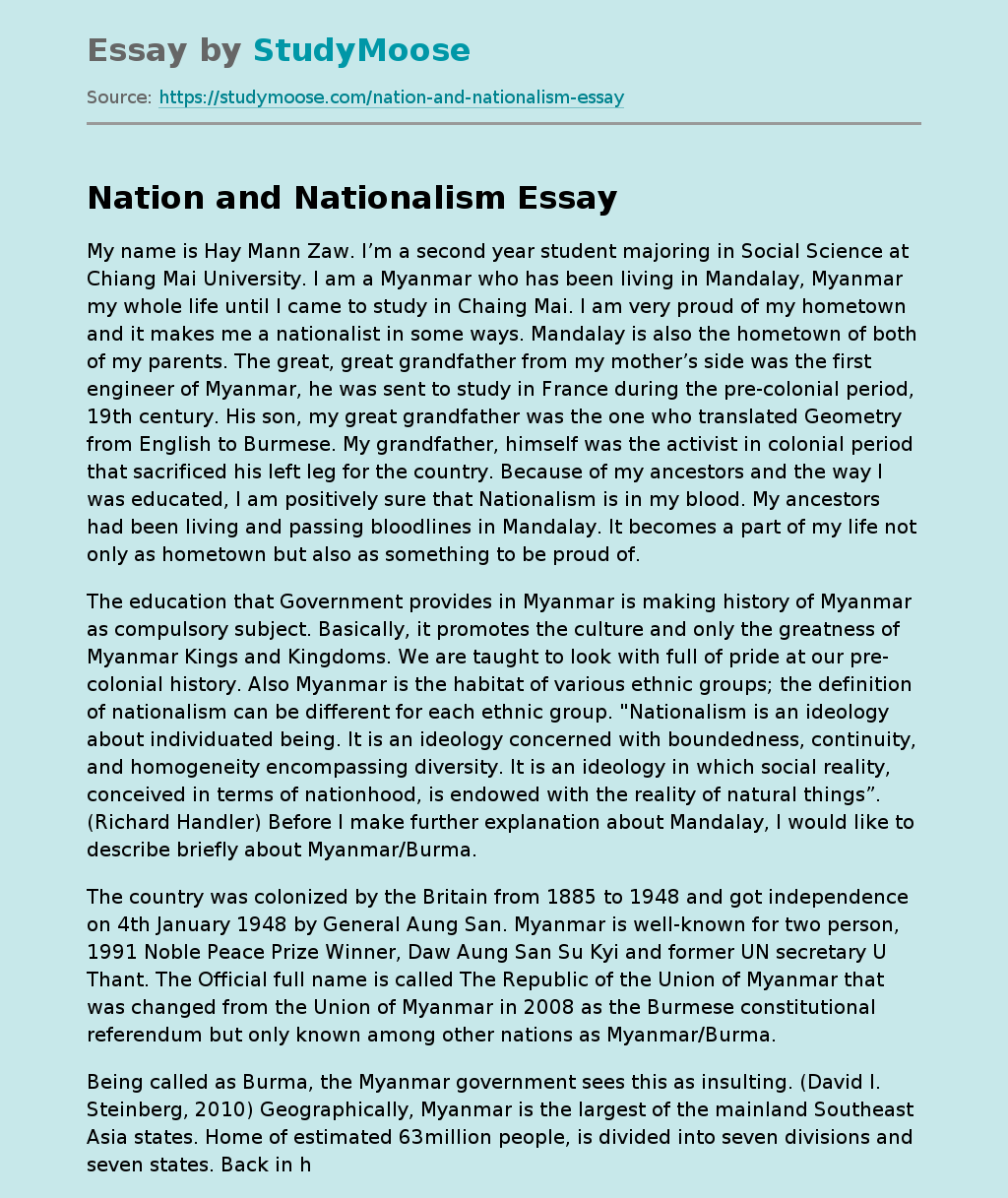