Jose Rizal and his Nationalism

Jose Rizal was idealistic, who wants to free his countrymen from ignorance, exploitation and discrimination. With the use of his works and writings especially his novels – Noli Me Tangere and El Filibusterismo, he reveals to his people their experiences and sufferings, sufferings which he brought to light in an effort to awaken his countrymen to the truths that had long remained unspoken, although not totally unheard of.

He showed to his people their sufferings friars and civil authorities, how the friars whom were guilty of bribery and corruption had made of the Catholic religion an instrument of domination and had prostituted it with exterior practices which foster the appearance of worship.

Turn in your highest-quality paper
Get a qualified writer to help you with
“ Jose Rizal and his Nationalism ”
Get high-quality paper
NEW! AI matching with writer

The friars also enriched themselves not only by exhorting excessive fees for church services, but also by unjust acquisition of land estates. They made themselves feared by civil officials.

They enjoy priorities over high government officials whose tenure of office they can control. The government itself sees nothing, hears nothing, and decides nothing except what the parish priests makes it see, hear, and decide.

And the civil guards do not protect the citizens like they supposed to but protect the interests of the friars and the Spaniards only. The priests controlled also the acts of the ignorant natives and threatened the indios’ heads with excommunication for the slightest sign of disrespect and disobedience. Many Filipinos had become victims of human indignities. They were deprived of their right. They had no right to question authority – they were born only to serve.

But Rizal did not put the blame entirely on the religious and civil authorities; he also honestly showed the weaknesses and defects of the Filipinos. The people themselves, by their timidity, fear, and cowardice had shackled their minds and debased their souls. Contaminated by the airs of superiority of the Spaniards, despise their own countrymen and make themselves ridiculous with their pretensions at false imitation. Rizal criticized this, the unspoken embarrassments of the natives for their own ancestry, and aspires to become a Spaniard to leave behind any trace of Filipino in them and then boasts to everyone. With that they gradually allowed the Spaniards to enslave them. As Rizal often said, “there are no tyrants where there are no slaves”.

And that Rizal wanted to vindicate his race from the insults and prejudices upon the Filipinos, and that his people were not an anthropoid race, as the Spaniard asserted. Although Filipinos have some vices and defects, the same with other people in the world, they are not those which the Spanish writers attribute them – that there is no stimulus to worth or to merit. On the contrary, when Filipinos rise above heap they are ridiculed and made the object of mockery unless they serve the friars. Many Filipinos are persecuted in false conspiracies or exiled from their towns for standing up for their rights.

Rizal wanted to bring back the pride in Filipino ancestors, a necessary component in the formation of national consciousness, and answer criticisms against Filipinos and their culture. He disproved the Spaniards and showed that the past of the Philippines already had a developed culture.

Rizal in all effort tried to convince the Spanish government that there was an urgent need for reforms in the society in the government, and in the Catholic church of the Philippines. And that violence is not the preferred solution and it should come about peacefully and sensibly and that one great solution is education. He tried to show that there was no rebellion or revolution in the Philippines, but there would be, if the abuses and excesses of the friars and the administration push the Filipinos to their limit.

Jose Rizal and his Nationalism. (2016, Nov 17). Retrieved from https://studymoose.com/jose-rizal-and-his-nationalism-essay 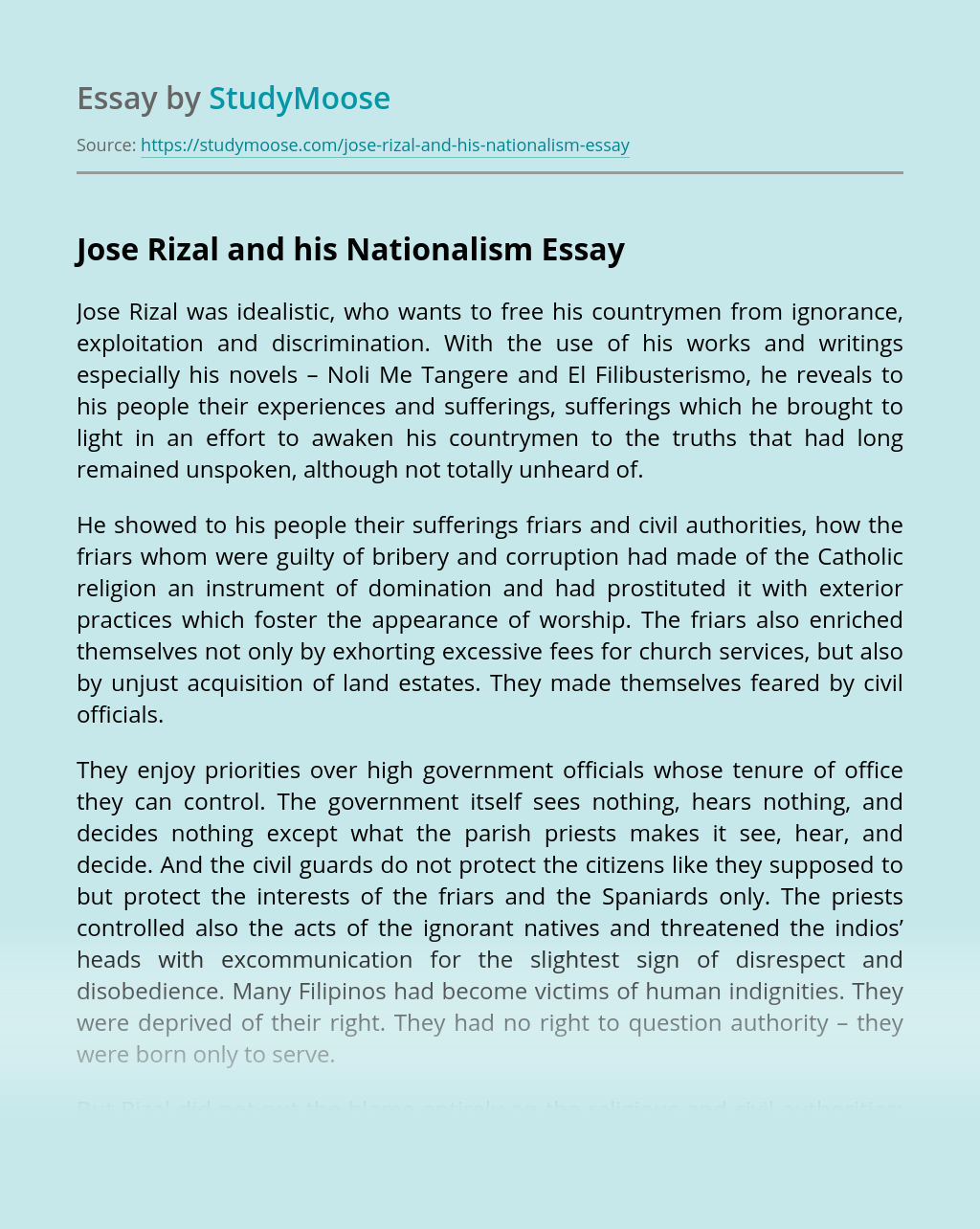 Turn in your highest-quality paper
Get a qualified writer to help you with
“ Jose Rizal and his Nationalism ”
Get high-quality paper
Helping students since 2015
Stay Safe, Stay Original