Noli Me Tangere. It is a novel written by Filipino writer and national hero Jose Rizal and was first published in 1887 in Berlin, Germany. This novel was written to remind us the bad things that Jose Rizal experienced during his time by the Spanish. From the very start of this novel, the first plan of our national hero is, to write this novel with the help of his countryman that is also suffering to the hands of the Spanish, but suddenly he failed to do it with the help of his countryman, because his countryman lose their hope in fulfilling their dreams to have freedom in the hands of the Spanish colonies.

Don't use plagiarized sources. Get your custom essay on
“ Noli me tangere reflection ”
Get custom paper
NEW! smart matching with writer

Jose Rizal, did not give up, because he continue write this novel without the help of his countryman, and he decided to write it by himself only.

The Noli is Rizal’s expose of corrupt friars who have made the Catholic religion an instrument for enriching and perpetuating themselves in power by seeking to mire ignorant Filipinos in fanaticism and superstition.

According to Rizal, instead of teaching Filipinos true Catholicism, they control the government by opposing all progress and persecuting members of the ilustrado unless they make themselves their servile flatterers. Rizal does not, however, spare his fellow countrymen.

The superstitious and hypocritical fanaticism of many who consider themselves religious people; the ignorance, corruption, and brutality of the Filipino civil guards; the passion for gambling unchecked by the thought of duty and responsibility; the servility of the wealthy Filipino towards friars and government officials; the ridiculous efforts of Filipinos to dissociate themselves from their fellowmen or to lord it over them–all these are ridiculed and disclosed.

Nevertheless, Rizal clearly implies that many of these failings are traceable to the misguided policy of the government and the questionable practices of the friars. Rizal nevertheless balances the national portrait by highlighting the virtues and good qualities of his unspoiled countryman: the modesty and devotion of the Filipina, the unstinting hospitality of the Filipino family, the devotion of parents to their children and children to their parents, the deep sense of gratitude, and the solid common sense of the untutored peasant.

The first chapter of this novel was entitled “the paging”, wherein, in this chapter stated the lifestyle of Don Santiago de los Santos also known as Kapitan Tiago, he was from Binondo and he was the stepfather of Maria Clara according to this chapter. In this chapter, the other characters was Padre Sibyla, Padre Damaso, and Tenyente Guevarra. According to this chapter, Kapitan Tiago invited the said characters to go to his house and have a simple gathering, but suddenly it came to a fight between Padre Damaso and Tenyente Guevarra because of the ereheng namatay. Padre Sibyla stops the rivalry between the two. The second chapter was entitled “Ang binatang si Crisostomo”. Wherein in, this chapter, Kapitan Tiago present Don Crisostomo Ibarra to the priest, the son of his deceased friend named Don Rafael Ibarra.

The Noli is, therefore, not merely an attack on the Spanish colonial regime; it is a charter for nationalism. It calls on the Filipino to recover his self-confidence, to appreciate his own worth, to return to the heritage of his ancestors, and to assert himself as the equal of the Spaniard. It insists on the need of education, of dedication to the country, and of absorbing aspects of foreign cultures that would enhance the native traditions. Noli Me Tangere was Rizal’s first novel.

He was 26 at its publication. This book was historically significant and was instrumental in the establishing of the Filipino’s sense of national identity. The book indirectly influenced a revolutionб although the author, Jose Rizal, advocated non-violent means and only direct representation to the Spanish government. The novel was written in Spanish, the language of the educated at a time when Filipinos were markedly segregated by diverse native languages and regional cultures. 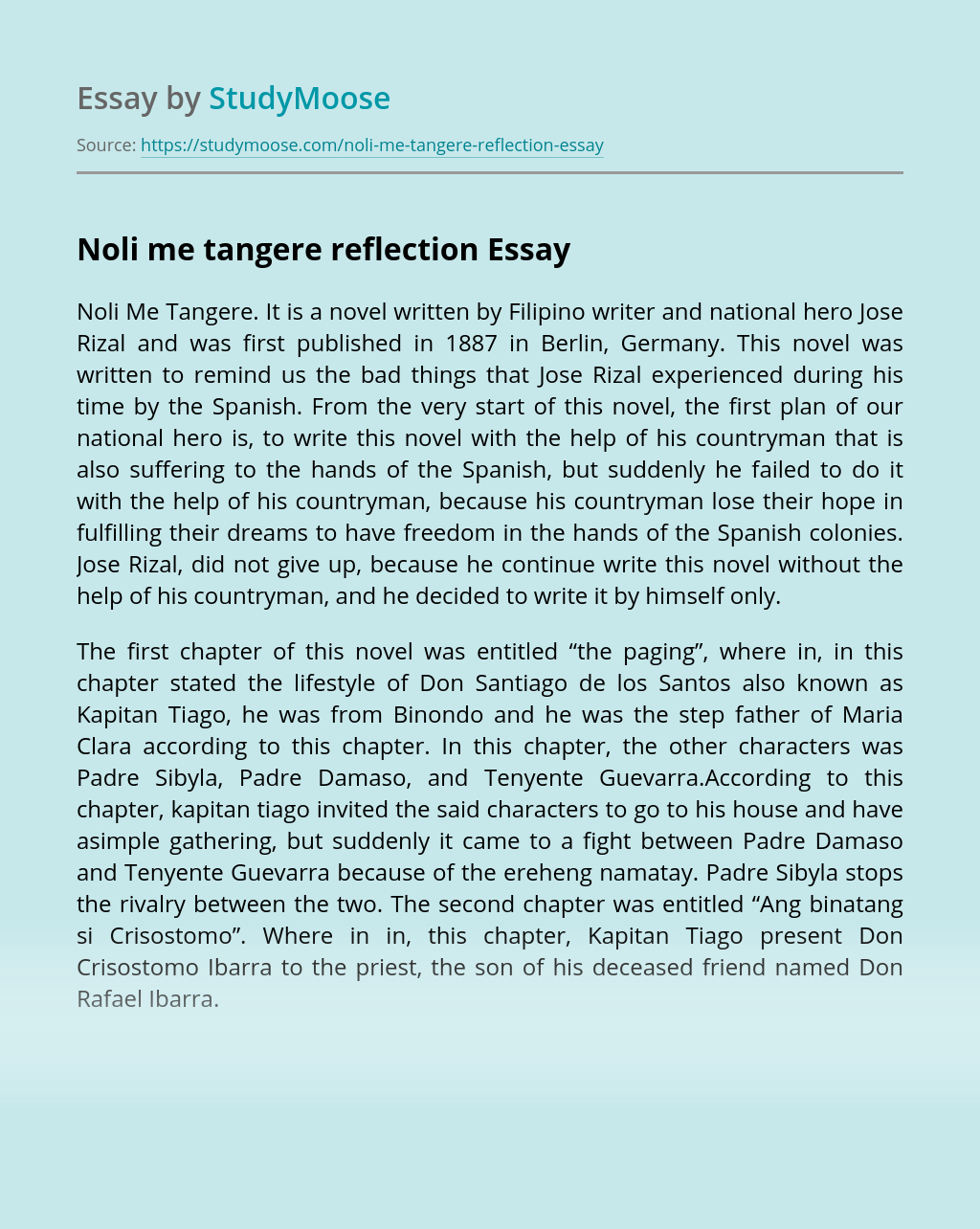