* Juan Crisóstomo Ibarra y Magsalin – commonly referred to the novel as Ibarra or Crisóstomo, is the protagonist in the story. Son of a Filipino businessman, Don Rafael Ibarra, he studied in Europe for seven years. * María Clara de los Santos y Alba – commonly referred to as María Clara, is Ibarra’s fiancée. She was raised by Capitán Tiago, San Diego’s cabeza de barangay and is the most beautiful and widely celebrated girl in San Diego.

Don't use plagiarized sources.
Get Your Custom Essay on Noli Me Tangere Cover Symbolism Just from $13,9/Page

* Don Santiago de los Santos – known by his nickname Tiago and political title Capitán Tiago is a Filipino businessman and the cabeza de barangay or head of barangay of the town of San Diego. He is also the known father of María Clara. * Doña Victorina de los Reyes de Espadaña – commonly known as Doña Victorina, is an ambitious Filipina who classifies herself as a Spanish and mimics Spanish ladies by putting on heavy make-up.

The novel narrates Doña Victorina’s younger days: she had lots of admirers, but she did not choose any of them because nobody was a Spaniard. Later on, she met and married Don Tiburcio de Espadaña, an official of the customs bureau who is about ten years her junior. * Dámaso Verdolagas – or Padre Dámaso is a Franciscan friar and the former parish curate of San Diego. He is best known as a notorious character who speaks with harsh words and has been a cruel priest during his stay in the town.

He is the real father of María Clara and an enemy of Crisóstomo’s father, Rafael Ibarra. * Pilosopo Tasyo – is another major character in the story. Seeking for reforms from the government, he expresses his ideals in paper written in a cryptographic alphabet similar from hieroglyphs and Coptic figures hoping “that the future generations may be able to decipher it” and realized the abuse and oppression done by the conquerors. * Sisa – is the deranged mother of Basilio and Crispín. Described as beautiful and young, although she loves her children very much, she can not protect them from the beatings of her husband, Pedro. * Crispín – is Sisa’s 7-year-old son. An altar boy, he was unjustly accused of stealing money from the church. After failing to force Crispín to return the money he allegedly stole, Father Salví and the head sacristan killed him. It is not directly stated that he was killed, but the dream of Basilio suggests that Crispín died during his encounter with Padre Salvi and his minion. * Basilio – is Sisa’s 10-year-old son. An acolyte tasked to ring the church bells for the Angelus, he faced the dread of losing his younger brother and the descent of his mother into insanity. At the end of the novel, Elías wished Basilio to bury him by burning in exchange of chest of gold located on his death 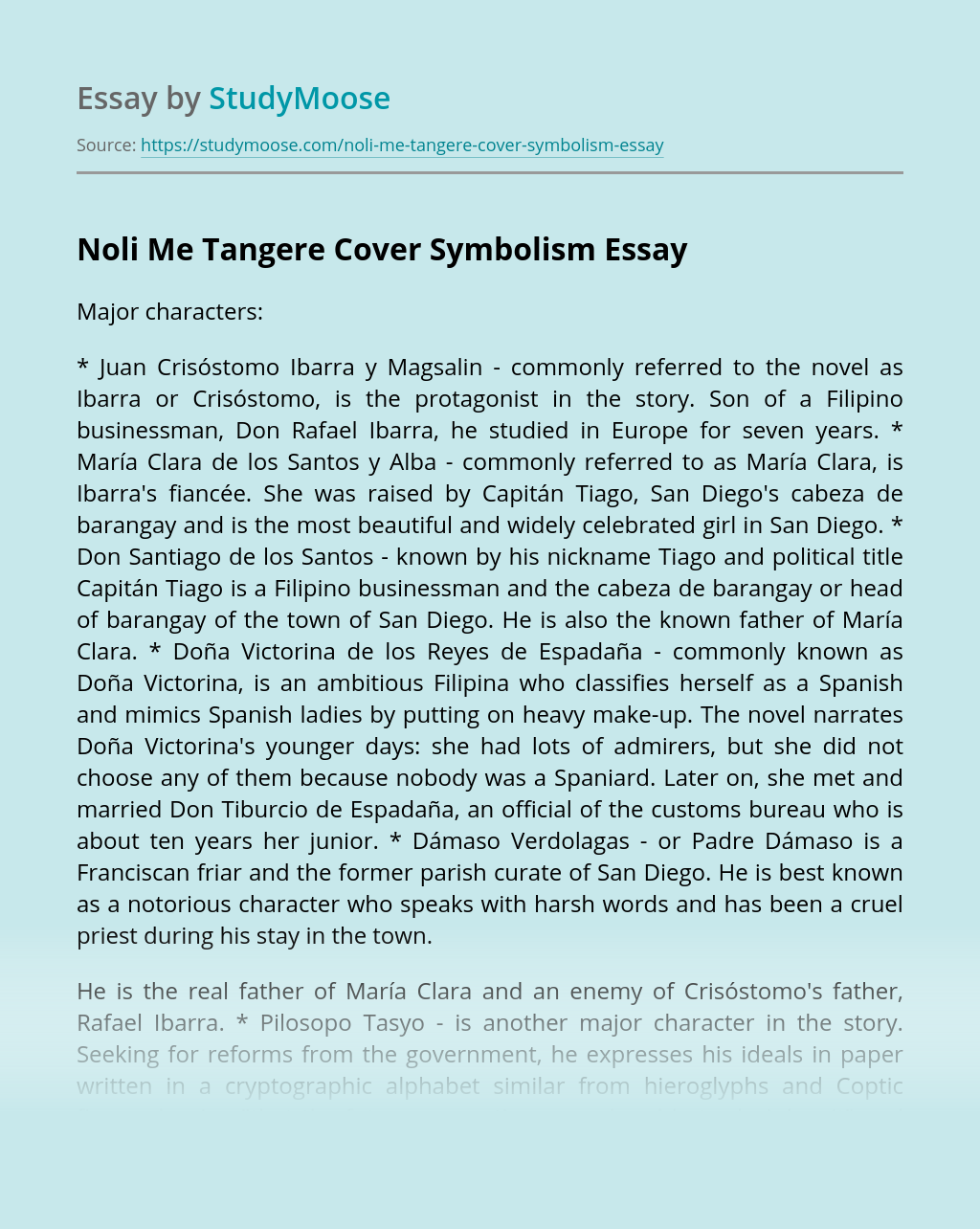 Introduction Top Glove Company is a company dealing with the manufacture of surgical and examination glove. It is a company which is customer oriented producing various types of gloves. The company lays emphasis on the production of high quality gloves. It also researches on new developments so that it does not lag behind as a... VIEW ESSAY

PART I– Ideas in Balance. To look is to believe. Salvador Dali Duration Focus Image Question Your Observations Total at the end of Week 1 ( 24 February). Image 1. Describe the balance of the Viking guard. It has 2 type of mirror line and it is a symmetric graph. It is likewise a rotational... VIEW ESSAY

View sample
Get Essay
What Makes Me Laugh

Laughter is a positive emotion that is triggered by a joke, being tickled, seeing funny appearances or physical actions, hearing funny voices and seeing various facial expressions .Laughter gets rid of all your stress hormones. Furthermore humour can be developed over time. When I was younger, I found many various things funny. Sponge bob, in... VIEW ESSAY

“More emphasis should be placed on the external supply of employees for meeting future needs because these employees bring new blood into the organization. This results in more innovative and creative ideas. ” Do you agree or disagree with this statement? Explain your response. Although there is enough data available to validate arguments made from... VIEW ESSAY

Americans who have always looked westward when reading about this period should read this book facing eastward”. Despite the popularity of the eyewitness accounts, Brown is not an absentee narrator. In the book Brown emphasizes two main points, the language he uses and the storyline of the book. He uses these two things to give... VIEW ESSAY