Albrecht Durer’s painting Adam and Eve, completed in 1504, exemplifies the Renaissance style for its visual artisanship and religious imagery. The artist’s efforts to render the human body realistically, as well as the use of shadow and perspective, set it apart from the recently-ended medieval era through its evolved use of technique. The work consists of two tall panels with dark backgrounds, placed side by side. The left panel contains Adam, standing on a surface scattered with small stones.

Unclothed, he is thin but muscular, particularly in the torso, calves, and arms.

Don't use plagiarized sources. Get your custom essay on
“ Dürer – Adam And Eve ”
Get custom paper
NEW! smart matching with writer

Apparently in the act of speaking to Eve, he seems to be shifting his weight toward his left while holding a small branch with an apple attached; its leaves conveniently cover his genitalia. At the right, Eve (also unclothed, with her genitalia covered by cleverly-placed leaves) is stepping forward, the weight shifted onto her right foot. Her figure is buxom and soft, emphasizing her femininity as opposed to Adam’s masculinity.

In her left hand, she holds an apple while a serpent coils around a tree branch to the viewer’s right. The two figures occupy separate panels but look at one another, drawn together by both their glances and the apples they hold. The subject matter is obvious to anyone familiar with the Judeo-Christian tradition, depicting the original couple’s sin of consuming the forbidden fruit – an allegory for their transgression against God’s mandates and fall from grace. Adam and Eve is a solid example of the early Renaissance style for two chief reasons.

First, it suits the style’s tendency toward religious and mythological subjects. Here, the Biblically-derived theme is overtly religious, as is much other Renaissance art throughout western and southern Europe, particularly in Italy. According to art scholar Allan Braham, Durer “undertook fearlessly to learn from the achievements of the Italian Renaissance [and] developed an unusual interest in the experiments of Venetian painters into effects of colour and light” (Braham, 1965, p.)

His use of shadow and color echoes that of Michelangelo, who used similar techniques in his frescoes in the Sistine Chapel a few years later. In addition, it exemplifies early Renaissance painting in its attempts at depicting light, color, and the human form naturalistically. Instead of depicting his subjects as flat figures, Durer (who had visited Italy a decade earlier and absorbed its influence) lights his painting from the viewer’s left, with their right sides shadowed.

The colors are at times vivid (especially the skin, which in Eve’s case looks luminous), but darkness also plays a role, emphasizing the brightness. Also, Adam and Eve’s physiques are realistic, with their musculature emphasize according to their movements; they are not stiff or oddly contorted, but seems to be captured in motion (as their billowing hair attests). In his other works (particularly his paintings but also his woodcuts), Durer pays the same attention to shadowing, three-dimensionality, and anatomical correctness.

For example, The Virgin in Prayer (1518) resembles other Renaissance artists’ works in its use of bright colors, properly-placed shadows, and attention to anatomical detail (particularly the hands) – the same elements that Michelangelo, a contemporary, strove to attain. Scholar Francis Russell writes that, unlike other contemporary depictions of Adam and Eve, Durer’s “are unique, reaching beyond the sinuosities of the Gothic and the severe classicism . . . and their freedom from any formula is the essence of their charm” (Russell, 1967, p. 119).

In this work, Durer works within the Italian Renaissance mode, incorporating the same attention to religious theme, realistic portrayal of the human body, and special attention to light and shadow that his southern contemporaries had done. Though he began as a woodcutter in a traditional German style, his paintings exemplify the then-emerging style that accompanied Europe’s intellectual rebirth. 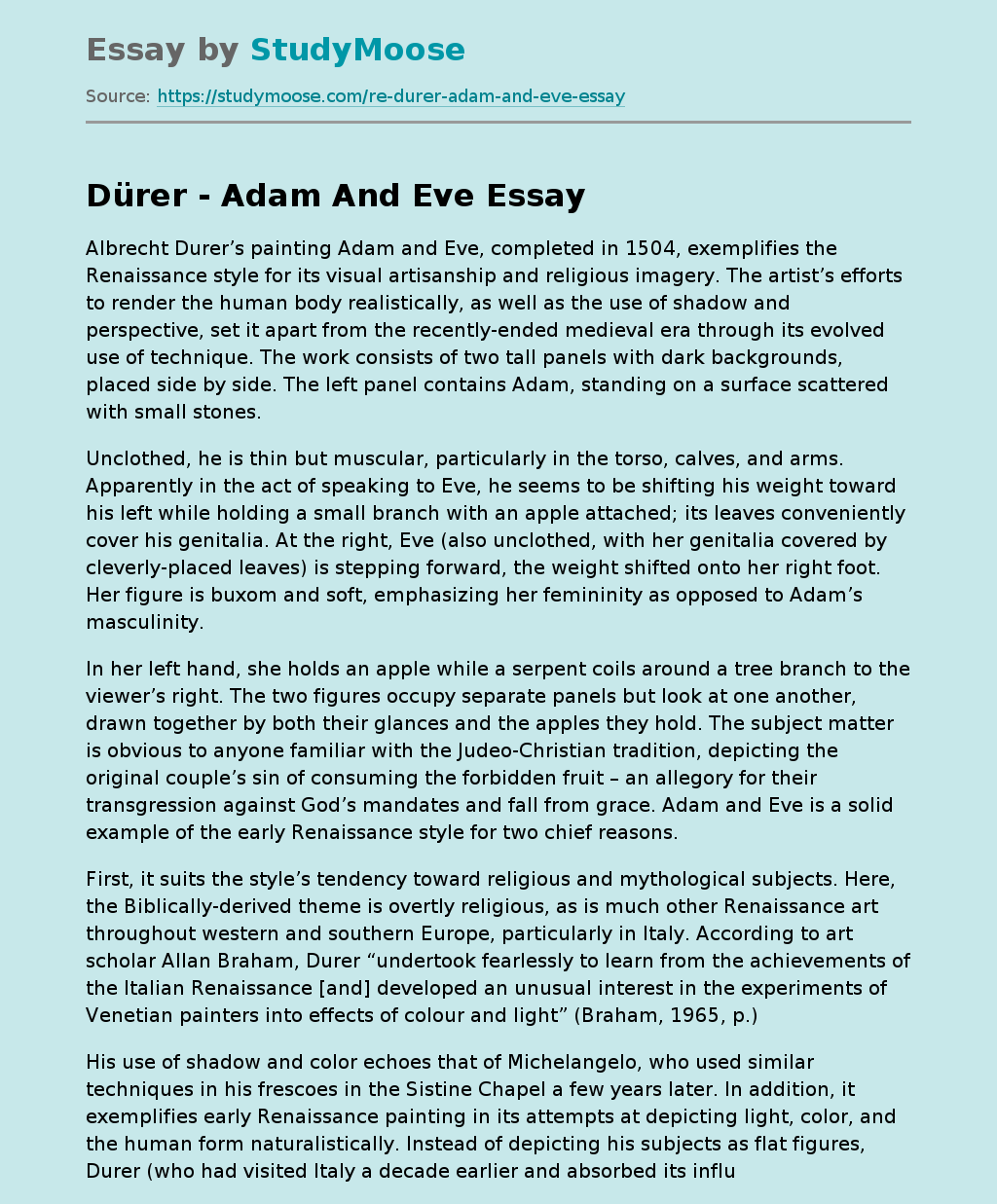