Punishment Of Adam And Eve In The Bible

One of the cornerstones of Abrahamic religions including Christianity is thesis about  descendence of humanity from a pair of humans originally created by God himself – Adam and Eve. Under the Bible they have been created innocent, but were seduced by a serpent (usually meant as Satan) to breach God’s counsels and angry God exiled them from Paradise. After that all the people bear a stigma of original sin. This paper aims to investigate the theme of divine punishment of Adam and Eve as it is understood in the Bible, as well as to discover its meaning and sense.

Don't use plagiarized sources. Get your custom essay on
“ Punishment Of Adam And Eve In The Bible ”
Get custom paper
NEW! smart matching with writer

The Bible tells that God has firstly created Adam and then decided to give him a wife. But before creation of Eve He instructed Adam: “Of every tree of the garden thou mayest freely eat: but of the tree of knowledge of good and evil, thou shalt not eat of it: for in the day that thou eatest thereof thou shalt surely die“[1] For a while both Adam and Eve obeyed this order, but then came a serpent, who persuaded Eve to taste fruits from a forbidden tree and give them to Adam.

As soon as they both ate a fruit they saw their nakedness and made clothes for themselves. This has been noticed by God who understood, that His commandment is violated and expelled Adam and Eve from Paradise cursing man to work (In the sweat of thy face shalt thou eat bread[2])  and woman to be obedient to man and bearing children in pain.

God also cursed serpents to crawl in dust and ordered an angel to guard the entrance to Paradise.

Traditions of three global Abrahamic religions interpreted the biblical story differently. In Christianity it caused Saint Augustine to develop a concept of “original sin” meaning both sin committed by Adam and Eve and sinful nature of every human being since the moment of birth. This doctrine, which may seem pretty unfair, rests on assumption, that breach of divine will has broken the world, and so men are born in the world which is already corrupted. Therefore, they can not avoid being sinful and human mission in the world is to attempt to restore celestial both in own nature and the world by virtuous actions[3].

Christianity understands original sin as hereditary, and so punishment for it is also hereditary. Saint Paul explained that “Sin came into the world through one man and death through sin, and so death spread to all men because all men sinned” [4], and Augustine developed this concept stating that sin of Adam was enough to make all men sinful. Moreover, because it was Eve who tempted Adam to eat the forbidden fruit, fathers of early church tended to rest responsibility for original sin exclusively on Eve and all women, and Tertullian even called women “devil’s gateway”[5].

Critics of classical Christian approach to punishment of Adam and Eve have proposed several moral and logical arguments. Firstly, Eve is said to have eaten the forbidden fruit, but in all other places of the Bible Adam is named as the first sinner, and original sin is also often called the sin of Adam, but not Eve. More than that, Eve has eaten the fruit and nothing happened. The first humans saw their nakedness and God punished them. So who was the first sinner? And why is Eve blamed as a seducer of man, if her actions meant nothing?[6] So perhaps there is some contradiction in the Bible.

The second argument is much more confusing for Christian ideologists. God created a perfect world in the Eden. He told Adam, that eating a forbidden fruit would kill Adam. But neither Adam, nor Eve died. So has God lied? And why has God created the Tree of Knowledge in case he knew that once men can try to breach His commandments? In case God is creator of all, why has he created a serpent. In case He wanted to test Adam and Eve, why was the serpent also punished? Under the Bible Adam and Eve were innocent and did not know what is good and what is bad. So how could they know that eating a forbidden fruit is bad? Were they subjected to punishment by God?[7]

Those questions caused the founders of Protestantism to deny a free will of men. In case Adam and Eve were subjected to punishment without choice and in case all people are sinful by their nature, this means that people are deprived of free will from the very creation and some of them are created for salvation and some for calamity. So “crime and punishment” of Adam and Eve were intended by God and the serpent was just a performer of God’s will[8]. But in case we accept such point of view, we have to come to a conclusion, that the serpent, the forbidden fruit and the punishment were only parts of a spectacle arranged by God. However, this somehow explains the first contradiction. Adam has sinned, so God wanted to make Adam sinful, and Adam was a sinner even before Eve was created.

The second appearing contradiction can be solved by literal interpretation of the biblical text.  In Latin malum has two meanings – apple and sin. So probably the “fruit” is only an allegory of evil. Adam and Eve have eaten the fruit thusly brought evil into their innocent nature making it imperfect[9]. This explains the second and somehow the first contradiction. Yes, men were perfect, but their own misconduct made them imperfect. Imperfect beings could not exist in perfect Paradise, so God had to exile them.

Moreover, God has not lied about Adam’s death, for he has not said “thou shalt die immediately”, He said only “thou shalt die”. Adam and Eve were perfect, and this means that they were immortal. After the original sin they became mortal. So God’s words were correct. And actually the punishment was made unavoidable by humans, even outside of divine will. Therefore, another question arises: has God had a freedom of choice whether to exile Adam and Eve or not, or he had to follow laws, which He had himself established and which He could not breach.

Thusly we come back to the idea that men’s misdeeds in the perfect world made the world imperfect and that bearing a stigma of original sin means living in the world corrupted as a result of Adam and Eve’s disobedience to God. But could God save Adam and Eve from punishment?

The question “could God do something?” sounds ridiculously. After all, He is a creator of the universe and everything inside universe. So it is obvious that he could chose not to expel Adam and Eve from Paradise and restore their perfectness. For some reason he has not done that and allowed humans live in the world by themselves. But as a benevolent creature He must have provided a way for men to return to Paradise. And exile from Eden should be understood not only a punishment, but as an ability to return to God by virtue of own actions and spiritual development[10].

Perhaps Tertullian’s approach (I believe it because it is absurd) was good for early Christianity, but to explain biblical story logically we need to combine Catholic and protestant approaches. People were sinful from the moment of creation, but they were potentially sinful. Before a sin was committed they remained innocent. They were not fated to calamity before testing a forbidden fruit, but they became fated after they did. God did have a freedom of will, and serpent was a part of divine intention.

However, in this world people do have freedom of will. They are responsible fro Adam’s sin as his successors, but they have a freedom of will to atone it. Those who chose evil are fated to calamity, and those who are able to chose good become “sentenced” to return to Eden. In the light of such discourse the punishment of Adam and Eve should be seen as opportunity for people for independent development intentionally given by God though original sin.

[5] The Condemnation Of Adam And Salvation Of Eve, 6 Dec, 2007 http://www.bethelministries.com/ADAM.htm

Punishment Of Adam And Eve In The Bible. (2017, Feb 16). Retrieved from https://studymoose.com/punishment-of-adam-and-eve-in-the-bible-essay 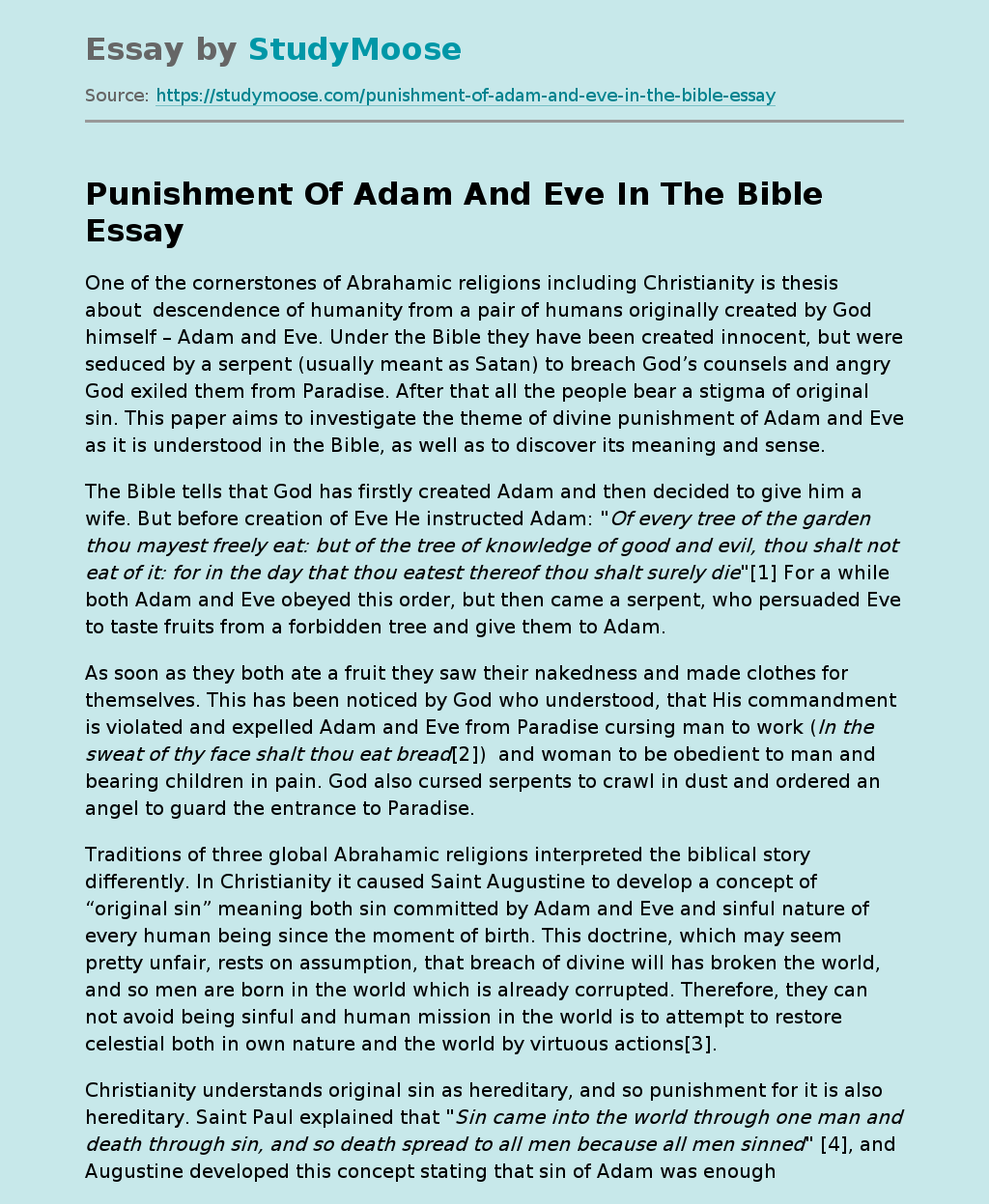