London, June 16 (ANI): Eve teasing in Bangladesh has taken such a heavy toll on the country’s women that the education ministry there has voted to have an “Eve Teasing Protection Day”. The announcement was made after the increasing concern over the worrying number of girls and women who have recently committed suicide in the country to escape eve teasing, a euphemism for sexual harassment. According to figures released by the Ain-O-Shalish Kendra (ASK) human rights organisation, 14 girls and women have taken their own lives over the past four months across the country as a direct result of the insults.

Don't use plagiarized sources. Get your custom essay on
“ ‘Eve Teasing in Bangladesh’ -Causes and Remedies ”
Get custom paper
NEW! smart matching with writer

In addition, a father and a daughter also committed suicide together – in an incident blamed by the authorities on “eve teasing”. Police say three men who publicly protested against the harassment have been killed over the past 12 weeks.

Critics argue that laws, which should prohibit sexual harassment, are so poorly drafted that victims get virtually no help from the law enforcement agencies.

Families of the victims are left feeling hopeless and helpless. “Some victims find suicide is the only avenue that enables them to escape this social pandemic,” the BBC quoted Sultana Kamal, executive director of ASK, as saying. “The situation is very frightening. The suicides of 14 girls are an alarming sign of the times. If it is not controlled, we women can no longer live in society with any dignity,” she said. Education Minister Nurul Islam Nahid while admitting to the menace said female students and female teachers were at present not safe on the streets or schools, a situation leading to an increased drop-out rate of female students in many schools, and underage marriages.

Kolkata, August 14 (IANS) Subjected to regular sexual harassment by a some local youths and following an altercation with her father on the issue, a 13-year-old-school girl committed suicide by immolating herself in West Bengal’s Burdwan district, police said Tuesday. Four people have been arrested in this connection.

“Ujjawala Prasad, 13, had set herself on fire last night and she succumbed to injuries Tuesday morning. Her father has lodged a complaint against nine persons who had been harassing the girl for the past few days. Four persons have been arrested,” a police officer said. The incident happened in Hirapur in Burdwan district, 213 km from Kolkata. Police said the girl complained to her father about some boys teasing her regularly, following which he went to confront them. The boys said the girl was having an affair with one of them. The father had a heated argument with the girl Monday night. After the incident, Leader of Opposition and Communist Party of India-Marxist leader Surjya Kanta Mishra said: “Not a single day passes when an incident of an attack on women is not reported. Today a girl committed suicide in Asansol after she was harassed by men. The attacks on women, especially on minor girls, has shot up.”

Rising incidents of sexual harassment and increasing public anger in protest has prompted the Bangladesh government, headed by a woman, Sheikh Hasina, to take action. In the latest incident Friday, villagers set fire to houses of some alleged stalkers in Talupara village in Sirajganj district, about 110 km northwest of Dhaka. The mob also caught a stalker’s father and handed him over to the police. In another incident, at least 10 members of a family were Wednesday beaten for protesting against stalking, and one of them died, The Daily Star reported. Abdur Rauf, son of Delwar, used to pester Kamrul’s wife Joinab, 18, every day.

After Joinab brought the matter to Delwar’s attention, Rauf and his men went to Kamrul’s house and beat up his family. Kamrul’s uncle Aser Ali succumbed to injuries on way to hospital. In another incident last week, a school girl’s father, who managed to nab her stalker and hand him over to the police, could not take questions from the media and died of heart attack. The government has promised a law to prevent sexual harassment of women at work. But the problem is difficult to tackle in villages where women and young girls from broken families or with men away on work face harassment from idle, at times better off, youths.

The government declared to observe June 13 as the Eve Teasing Protection Day from this year. The resolve to raise public awareness comes from the presence of several women in public life. “In a country where the prime minister (Sheikh Hasina), foreign minister (Dipu Moni), home minister (Sajeda Khatun), agriculture minister (Motia Chowdhury) and the leader of the opposition (Begum Khaleda Zia) are female, women and girls cannot walk on the streets, use public transport, or go to school, shops, parks or other public places without often being ogled, taunted, harassed, humiliated, sexually molested, groped and assaulted – and in some cases, attacked with acid, abducted and raped,” The Daily Star lamented in a commentary Saturday.

A large number of school and college students held a rally in Dhaka to protest against ‘eve teasing’ and the sexual harassment of women. According to the BBC, the rally was the latest in a series of protests following a number of suicides and killings involving women subjected to bullying and harassment. The protestors have urged the Bangladesh government to take proper steps to curb sexual harassment and provide better protection for women. “Some right-wing parties say that if the girls wear a veil, then they can escape Eve teasing, but we don’t think so.

We need tougher legislation and it should be properly implemented to stop this menace,” one of the protestors said. Young girls often face verbal abuse, taunts and stalkers, and critics are forcibly silenced. Those harassing them are often their school colleagues or men in the street, the report said. According to activists, eve teasing and sexual harassment has led to the deaths of more than 24 people, most of them women, since the beginning of this year in the country. In recent days, some who have spoken out against sexual harassment have been murdered, it added. (ANI) 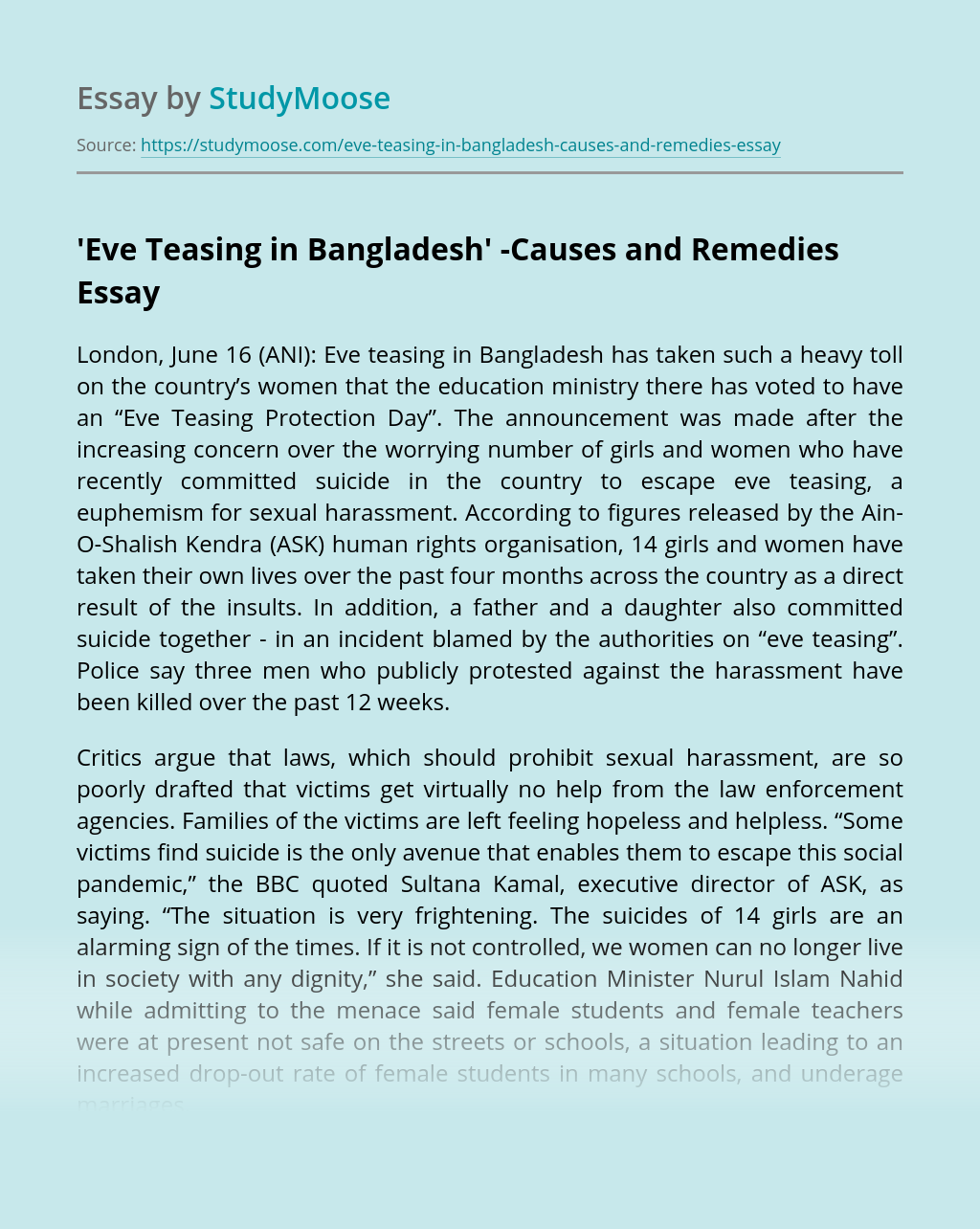