Narrative Voice in Pride and Prejudice

Read the passage from Pride and Prejudice (volume 1, chapter XVII) carefully several times. Then, in an continuous essay of no more than 1,000 words, analyse the passage, discussing ways in which the narrative voice and dialogue are used.

Throughout the passage, Jane Austen uses a variety of different narrative and dialogue techniques. The reader hears from three different people, an omniscient narrator, Elizabeth Bennet and Jane Bennet. Through these characters the technique of “showing” is used, which involved direct speech and “telling” where the narrator describes what is happening, what the characters are saying and how they are feeling.

Turn in your highest-quality paper
Get a qualified writer to help you with
“ Narrative Voice in Pride and Prejudice ”
Get high-quality paper
NEW! AI matching with writer

The passage opens with the omniscient narrator introducing a discussion between Jane and Elizabeth regarding Mr.

Wickham’s dealings with Mr. Darcy. Austen uses the “telling technique” to introduce this passage to give clarity to the reader as to what the discussion is about, Austen opens with “Elizabeth related to Jane the next day, what had passed between Mr. Wickham and herself”. Elizabeth has decided to share her conversation with her sister Jane the following day, which means that Elizabeth has firstly had time to digest what Wickham has told her and secondly the narrator is telling us that she is close to her sister, because she is sharing this important information with her.

The narrator uses free indirect speech which allows the reader to trust Elizabeth’s account of Wickham to be true, even though the reader does not know what has been spoken between the sisters.

The narrator uses Jane for focalization. Through the “telling” technique the reader is allowed to see Jane’s reaction to Elizabeth’s encounter with Wickham, Austen writes “Jane listened with astonishment and concern”. Jane is “astonished” because the reader knows she thinks so highly of Bingley and she does not believe he would be connected with Mr. Darcy if the statement was true, “she knew not how to believe that Mr. Darcy could be so unworthy of Mr. Bingley’s regard”. Jane is concerned as she is hoping for a marriage with Mr. Bingley and does not want anything to ruin her plans, the narrator informs, “it was not in her nature to question the veracity of a young man”. Jane’s character is not one which would look for bad qualities in a person and through this form of free indirect speech; Austen is able to create a tone and expression which Jane’s character would use. Jane concludes that she wishes to keep an open mind and believes there is another explanation for what has passed stating “It is in short impossible for us to conjecture the causes or circumstances which may have alienated them”.

The next part of the passage shows direct speech between Jane and Elizabeth, and the “showing” technique is used to state their difference of opinions. Jane feels there is no one to blame other than misunderstanding on both parties. Elizabeth however, uses a mocking tone in her response to Jane exclaiming “and now, my dear Jane, what have you got to say on behalf of the interested people who have probably been concerned in the business?” Elizabeth is trying to convince her sister that her point of view is the correct one, and also by referring to Jane as “my dear Jane” although she is mocking her, there is fondness and closeness for her sister and it highlights Jane’s character of seeing the good in all people and a little naivety on Jane’s character.

Throughout the dialogue between Jane and Elizabeth the narrator is “showing” the reader how Elizabeth is trying to convince her sister that Wickham is being honest in his account of his dealings with Mr. Darcy. Elizabeth gets the reader to instinctively believe what Wickham has told her, without question or doubt. The reader trusts what Elizabeth is saying and the likability of the character also emphasises this. Elizabeth past accounts of events have been very shrewd if a little ironic, however the reader may guess that Elizabeth may be wrong in her prejudice towards Mr. Darcy. Although Elizabeth uses facts and names to convince Jane, Jane is still doesn’t believe the situation to be true, Jane proclaims “It’s difficult indeed”. Again the reader sees Jane’s personality as someone who does not look at anyone in a bad way through this direct speech. The narrator uses “showing” in Elizabeth’s reply of “I beg your pardon – one knows exactly what to think”, meaning that Elizabeth is still convinced Wickham is being truthful and she feels very strongly about this and almost convincing herself Darcy has most defiantly done wrong.

Jane’s character is used to focalize again, allowing the reader to see how she reacts to Elizabeth. The narrator then uses free indirect speech to show the reader how Jane is thinking and worrying about Mr. Bingley and how could be viewed publicly – “Jane could think with certainty on only one point, – that Mr. Bingley, if he had been imposed on, would have much to suffer”.

The passage closes with the arrival of the Bingley’s, going from narrative voice to authorial comment, Austen writes “the arrival of the very persons of whom they had been speaking”. The Bingley’s give their invitation to Netherfield ball and the narrative voice changes to indirect speech reporting what the characters say. The reader learns of how the Bingley sisters treat Jane and her family through the narrative voice and showing the fondness they have for Jane, “The two ladies were delighted to see their dear friend again” however the reader sees the rest of the family are treated differently stating “To the rest of they paid little attention; avoiding Mrs. Bennet as much as possible, saying not much to Elizabeth, and nothing at all to the others”.

The techniques of showing and telling which Austen uses this allows the reader to see how convinced Elizabeth is with Wickham’s story of Darcy and how she pre judges him on the basis of someone else’s story, linking to the major theme and title of the book. Wickham is now shown as a good character an Darcy as a bad character. Through the sympathy the reader has with Elizabeth the reader is able to believe Elizabeth’s judgment on both Wickham and Darcy’s character.

Narrative Voice in Pride and Prejudice. (2016, Oct 01). Retrieved from https://studymoose.com/narrative-voice-in-pride-and-prejudice-essay 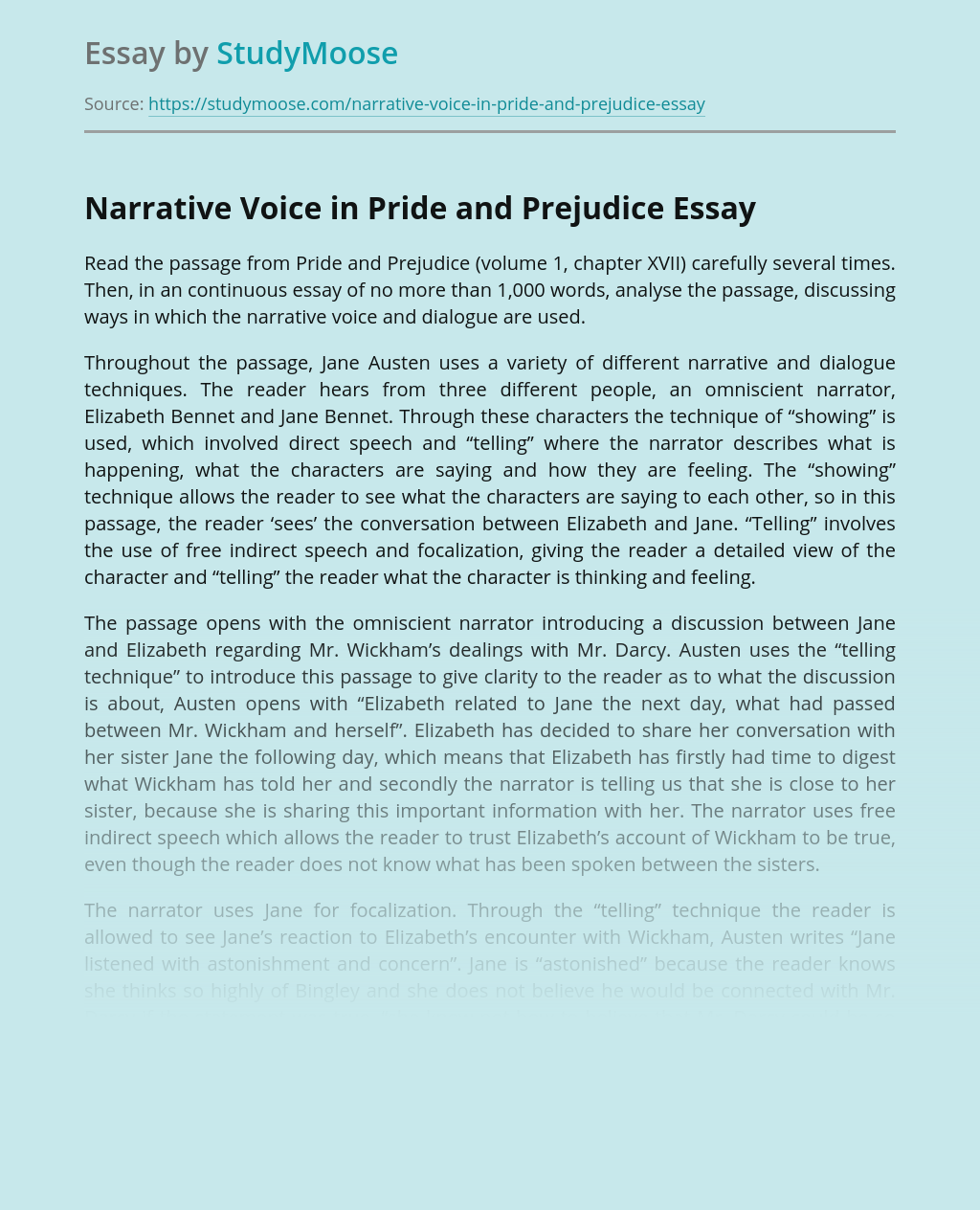 Turn in your highest-quality paper
Get a qualified writer to help you with
“ Narrative Voice in Pride and Prejudice ”
Get high-quality paper
Helping students since 2015
Stay Safe, Stay Original