The ways in which Jane Austen uses different narrative voices in her novel, Pride and Prejudice, from pages 281 to 283

Austen’s Pride and Prejudice uses voices to reveal more about the personalities of the characters in her novel. A combination of third person narrative, dialogue and letters are used to convey information to the reader. Letters play a very important role in Pride and Prejudice, they help to reveal the character and personality of the character sending the letter, and convey information faster than dialogue or narration. Collins’ letter in Chapter 13 is not very different from his letter in chapter 48, he does not come across as being an agreeable man.

Don't use plagiarized sources. Get your custom essay on
“ The ways in which Jane Austen uses different narrative voices in her novel, Pride and Prejudice, from pages 281 to 283 ”
Get custom paper
NEW! smart matching with writer

Mr Collins offers some condolences, but mostly underlines how Lydia’s offense will ruin the chances of her sisters getting married, stating that Lady Catherine also agrees with him.

A letter can be used as a way of saying things that characters would not normally say in person because of the impersonal means of communication. Mr Collins usually finds himself with too much to say in some situations however, I do not feel that he would have expressed his feeling in the same way had he been in Longbourn; When Mr Collins visits the Bennet household for the first time he is interrupted by Lydia whilst reading to the family, he does not have a word of objection about this although you can tell that he is offended.

In this extract, Austen’s third person omniscient narrative technique seems to be dominant. In this method of narration Austen takes full control of the narration of the story, explaining events and how people feel.

“Mrs. Gardiner went away in all the perplexity about Elizabeth and her Derbyshire friend, that had attended her from that part of the world”. Mrs. Gardiner does not express her perplexed feeling however, we know that she feel this way because Austen’s omniscient narrative voice tells us that she does, and in this case we have little choice but to agree with her. This technique is also useful when telling us what characters are truly thinking if they are guarded in conversation. When Elizabeth reads Darcy’s letter, revealing the truth about Wickham her reaction does not seem to be out loud. “How despicably have I acted…I, who have prided myself on my discernment”. Austen has found a way to inform the reader of characters feeling even when they don not speak.

This narrative technique is almost opposite to dramatic method of narration that Austen uses. In this method of narration Jane Austen completely withdraws from the action and with very minimal narration and description lets the entire scene play out in dialogue. This technique is used in very first chapter of the novel where we get an introduction to the Bennet family and also see an immediate start to issues with Bingley at Netherfield.

There are readers who believe that the third person narrative voice is Elizabeth Bennet’s. This is a strong argument as Austen only depicts scenes in which Elizabeth is present in the novel, and this is true of no other character; Elizabeth’s presence may be necessary because she is the narrator. In my opinion the narrator is not an actual character in the story, but a separate entity. The narrative voice describes Elizabeth herself in third person and often enters the mind of different characters to inform the reader of proceeding from their perspective. Elizabeth may be smart and attractive but as far as I know she is not omniscient.

Lastly, I do feel that voices become close to indistinguishable near the end of the novel. This could be due to Austen using less dialogue and more narration than in previous chapters. “Everyday at Longbourn was now a day of anxiety”. In this quotation the narrative voice may echo the opinion of the community and the individual voices may seem to be lost. The narrative technique of small town opinion is not a particular characters voice, but rather the unified voice of the community; characters voices and opinions are not lost but not completely distiguishable from eachother. This quote could be one of the Bennet sisters, as they may feel this way, however, Elizabeth is the sister most likely to feel that letters “bring some news of importance”.

To conclude, letters play an important role on Pride and prejudice, allowing the reader to learn about events more quickly, whilst learning about the character sending the letter. The omniscient third person narrative technique is also useful when learning about characters as it enters their mind at various points in the novel so that the reader can see their thought process. Voices in pride and prejudice may not be completely indistinguishable but at times are lost in small town opinion.

The ways in which Jane Austen uses different narrative voices in her novel, Pride and Prejudice, from pages 281 to 283. (2020, Jun 02). Retrieved from https://studymoose.com/ways-jane-austen-uses-different-narrative-voices-novel-pride-prejudice-pages-281-283-new-essay 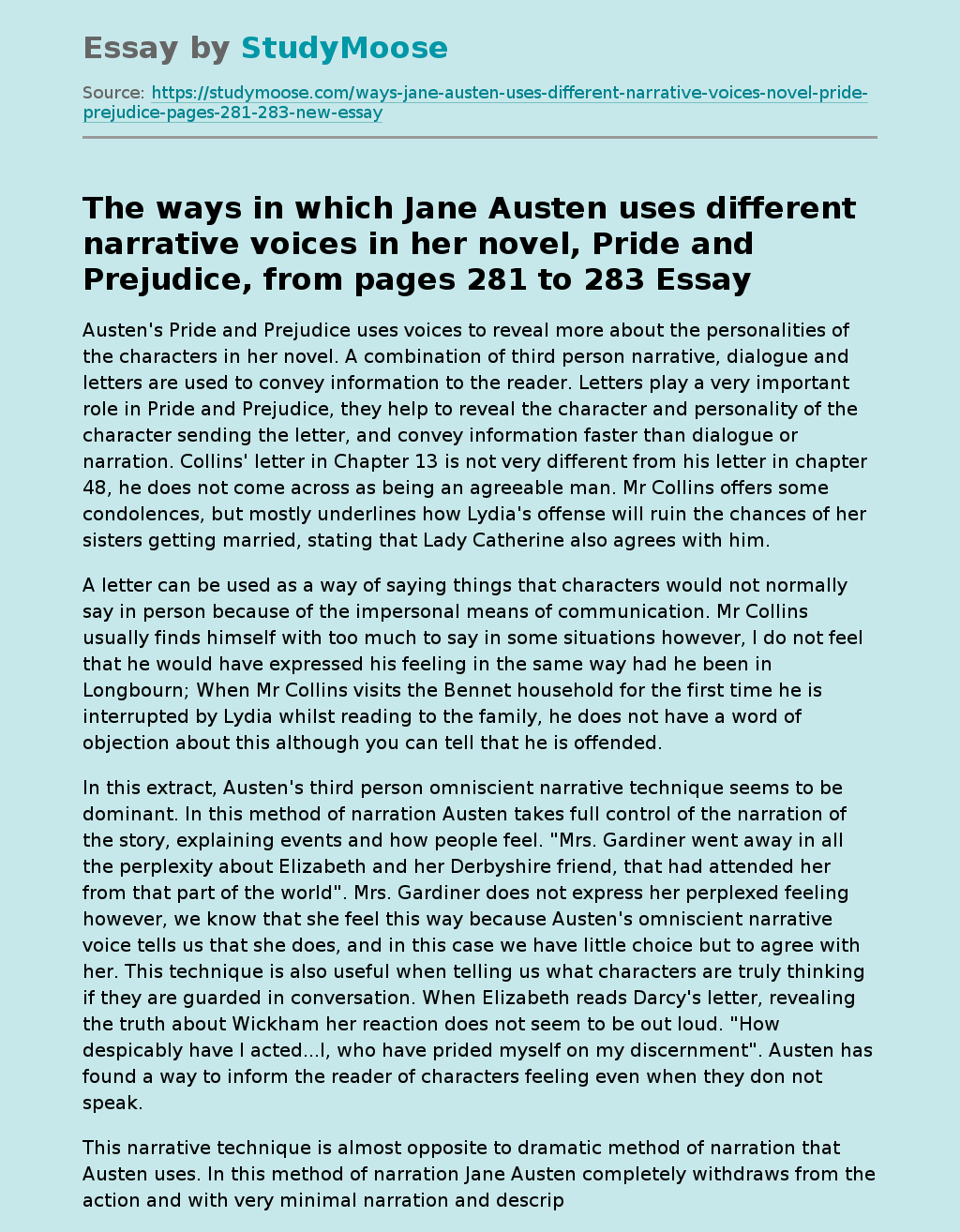