Narrative of the Life of Frederick Douglass Reflection

Reading this could cause someone to have an array of emotions. I found the text to be drowned out and heavy in terms of academic verbosity. Nonetheless, there were points of interest scattered through the book that made reading a bit more enjoyable. Through reading the book, Narrative of the Life of Frederick Douglass, it gave me the ability to put myself in the shoes of a slave at that time and in turn learn the hardships they faced as well as the sense of accomplishment when finally achieving the freedom they yearned.

Don't use plagiarized sources. Get your custom essay on
“ Narrative of the Life of Frederick Douglass Reflection ”
Get custom paper
NEW! smart matching with writer

While reading this book, there were many interesting portions, confusing statements, connections that invoked conclusions, and had a rhetoric that encouraged the reader to sympathize with him.

Based on historical evidence, it is safe to assume that people of color were treated quite unfairly. Similar to a previous statement, this book gave a perspective of a slave. In particular, it gave a perspective through the eyes of Frederick Augustus Washington Bailey, or better known as, Frederick Douglass.

This perspective allowed to feel and sympathize with the experiences Douglass had to endure. Whilst reading the text, it seemed as if he had more luck compared to other slaves. Though he endured his fair share of punishment and cruel masters over the years, his masters seem to have been on the kinder side of the spectrum comparatively. Examples of such would be his first master, whom of which he was favored, and Mr. and Mrs. Auld, who were kinder than most slaveholders.

Another interesting point would be the stark difference between the north and south attitudes towards the slaves and what it meant in everyday life. In the south, they treated the slaves as if they were animals, just workers and dehumanized those different from themselves. Meanwhile, the residents in the north treated colored people more equally, considering them, for the majority the first time, as humans. As formerly mentioned, this lifestyle was reflected in day-to-day life. While the south thrived in wealth from the hard labour of slaves, the north prospered from everybody working. Meaning, the slave-holders received their income at the expense of other people’s torment while the non-slave-holders in the north received their money from their hard work. The difference in culture made this comparison interesting. Despite interesting aspects of the narrative, there were still sections that caused confusion.

Throughout the book, there were moments that invoked confusion. In particular, the first few chapters of the book. While reading, the realization that the beginning was simply an overview of the book did not come until parts of his life began to overlap. Meaning, portions of the beginning of the book were repeated in more detail throughout the reading. This lead to confusion because it disoriented the timeline I thought was occurring for quite a bit. Though, this confusion was short-lived after the realization aforementioned. Other than moments of surprise at the actions of some of the characters, the book was relatively straightforward and understandable.

While reading the text, I noticed that there were several overarching themes. In particular the discovery of a self-identity, how knowledge can bring power, and the relation and feelings regarding religion. First, the discovery of self-identity. Slaves were treated like animals, at times even less than animals. This sort of behavior is degrading and dehumanizing, which in turn could cause someone to be an empty shell. One of the first instances of Douglass discovering himself would be his arrival at the Aulds. From thenceforth, Douglass would go between being an empty working shell and having a self-identity as a person. After reaching the north and becoming a freeman, Douglass would finally be regarded as a person with an identity for himself. It seems that having a sense of self-identity was the first step to be regarded as human. The reason for this initial realization was because the Aulds, in particular, Mrs. Auld, would teach him how to read and write. This would, in turn, give him a hunger to learn more as this opened his eyes to the possibility of freedom through words. The knowledge would allow him to speak his mind and give him a voice against slaveholders. This voice would go on and influence others to do the same, becoming an advocate for anti-slavery. This is a prime example that knowledge is equivalent to power. One of the reasons as to why slavery was so supported, was because of religious influence. Some people used religion as a way to justify the wrongdoings, such as whipping and rape, done to slaves. The use of religion to rationalize slavery was used so often that Douglass called this hypocrisy out in the Appendix.

Though not as obvious in the beginning, it slowly becomes apparent that this book contained certain rhetoric to persuade the audience his position, the longing for civil rights. A method he seems to use would be to appeal to pathos. Through explaining the hardships he’s been through and experienced, it can make the reader sympathize with his situation. Some hardships include severe punishment justified through religion, deceiving masters, and not being recognized for their hard labour. In his narrative, Douglass advocated for freedom. He often expressed his want to leave everything and run away from the unfair pain brought to him and his people.

Reading and annotating the book, though long and slightly strenuous, gave me a perspective and a view I have never seen before. Through the book, I was able to obtain interesting factoids, encounter confusing portions, draw conclusions from connections, and analyze the rhetoric Frederick Douglass used. This was the type of story made to cause the reader to think about what they are reading.

Narrative of the Life of Frederick Douglass Reflection. (2021, Feb 10). Retrieved from http://studymoose.com/narrative-of-the-life-of-frederick-douglass-reflection-essay 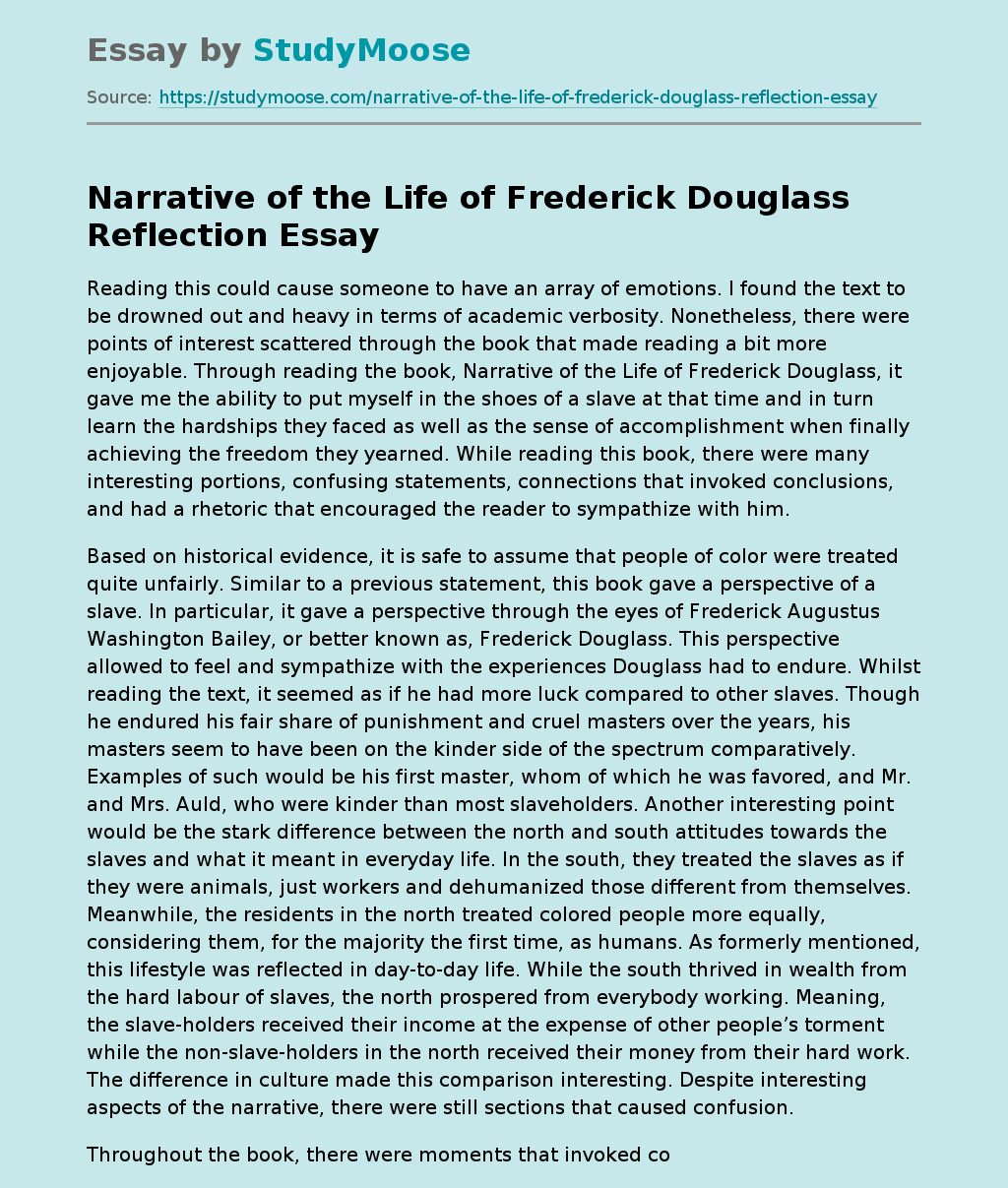