A Comparison of Freedom: The Works of Frederick Douglass and David Walker

One of the hottest and most discussed topics in American History is the issue of freedom. This is because of the fact that the young American nation, especially in the early and middle 19th century, witnessed different notions of freedom that is believed by her citizens; and most contrasting in this case is the notion of freedom by the industrial north (who favored the abolition of slavery), and the notion of freedom by the agricultural southern states (who favored slavery).

It is well known that the United States is called the “home of the free and the land of the brave;” however, it is also well known that the institution of slavery and the racism against African Americans played a dominant part in the southern states of the country, dominated by cotton plantations (also known as the “deep south”).

Turn in your highest-quality paper
Get a qualified writer to help you with
“ A Comparison of Freedom: The Works of Frederick Douglass and David Walker ”
Get high-quality paper
NEW! AI matching with writer

This paper would then discuss the notions of freedom according to two African Americans, one whom is slave: Frederick Douglass and David Walker.

Frederick Douglass is one of the most famous former slaves in American History; he soon escaped from his masters, helped in the strengthening of the “underground railroad” (a secret route that helped slaves escape to freedom”), and joined the abolitionist movement. His personal accounts, as well as his notions of freedom, can be seen in his work My Bondage and My Freedom. Meanwhile, David Walker is also an abolitionist; but he was free unlike Douglass (his father was a slave, but his mother was free).

Despite being a free man, he also witnessed the cruelties of slavery in his childhood, and advocated the abolishment of slavery, detailed in his work Walker’s Appeal, in Four Articles; Together with a Preamble, to the Colored Citizens of the world, but in Particular, and Very Expressly, to Those of the United States of America (also known as David Walker’s appeal).

This essay would try to make an analytic comparison of their ideas on freedom based on these two works.

2. Frederick Douglass on Freedom One of the most compelling accounts of freedom as narrated by Frederick Douglass can be seen in Chapter XIX of his book My Bondage and My Freedom, entitled The Runaway Plot (Douglass 271-303). In this chapter, Douglass was actually reflecting upon his thoughts on New Year’s Eve, especially upon his thoughts on gaining freedom and liberty (Douglass 272).

In his thoughts, Douglass actually stated one of the most important precepts of the freedom of every individual, in which each man has the right to be free ever since being born, and regardless of color (Douglass 272). According to Douglass, “I was not through the first month of this, my second year with the kind and gentlemanly Mr. Freeland, before I was earnestly considering and advising plans for gaining that freedom, which, when I was but a mere child, I had ascertained to be the natural and inborn right of every member of the human family.

The desire for this freedom had been benumbed, while I was under the brutalizing dominion of Covey; and it had been postponed, and rendered inoperative, by my truly pleasant Sunday school engagements…It had, however, never entirely subsided. I hated slavery, always, and the desire for freedom only needed a favorable breeze, to fan it into a blaze, at any moment. ” (Douglass 273).

In this case, it can clearly be seen that Douglass strongly believed that every man is created equal, wherein every man also has the right to freedom, in the sole reason that he is human; this debunks the very notion of the racial basis of inequality and slavery. Douglass adds to this point by saying that “My faculties and powers of body and soul are not my own, but are the property of a fellow mortal, in no sense superior to me, except that he has the physical power to compel me to be owned and controlled by him.

By the combined physical force of the community, I am his slave — a slave for life” (Douglass 272). This is where Douglass wants to be free, for he believes that the master owing him is not, in any sense, superior to him, but is dictated by circumstances and by institutions to be slaved. In addition, the notion of freedom according to Douglass, even though it is a natural right, must be fought for whenever it is taken away, this is the freedom that comes with action (Douglass 274).

According to Douglass, “The intense desires, now felt, to be free, quickened by my present favorable circumstances, brought me to the determination to act, as well as to think and speak…This vow only bound me to make my escape individually; but the year spent with Mr. Freeland had attached me, as with “hooks of steel,” to my brother slaves… and I felt it my duty to give them an opportunity to share in my virtuous determination by frankly disclosing to them my plans and purposes” (Douglass 274).

In this case, freedom is not only to be fought for individually, but also for fellow men, for “brothers” whose freedom is actually taken away. Therefore, the idea of freedom by Douglass does not only end in recognizing your own personal right to freedom, but also for fighting for the freedom of other oppressed peoples. After he escaped into freedom from slavery, he put into action his words by joining the abolitionist movement, claiming victory when Abraham Lincoln officially abolished slavery at the end of the civil war. 3.

David Walker on Freedom David Walker, famous for his David Walker’s Appeal, also expressed his notion of freedom in a very expressive way, earning the contempt of both white plantation owners and white supremacists. According to Walker, “All I ask is, for a candid and careful perusal of this the third and last edition of my Appeal, where the world may see that we, the Blacks or Coloured People, are treated more cruel by the white Christians of America, than devils themselves ever treated a set of men, women and children on this earth” (Walker 4).

In this case, Walker also believed that it is the very “evil” institutions of slavery that has violated the right of freedom of men, stating that the system of slavery in itself is cruel and inhuman, and that it is even the source of all miseries and cruelties to all nations (Walker 6). Therefore, Walker argues that slavery must not be practiced at all, given that freedom is a right and it must not be violated. In addition, Walker also states that

“All persons who are acquainted with history, and particularly the Bible, who are not blinded by the God of this world, and are not actuated solely by avarice–who are able to lay aside prejudice long enough to view candidly and impartially, things as they were, are, and probably will be– who are willing to admit that God made man to serve Him alone, and that man should have no other Lord or Lords but Himself–that God Almighty is the sole proprietor or master of the whole human family” (Walker 7).

In this argument, Walker seeks a biblical explanation, wherein God created all men equal, and only God is superior to man; therefore, it also follows that it is only God who has the right to become master of man, to become the proprietor of man, to which slavery is a direct violation of it. 4. Conclusion One common aspect of the notion of freedom for both Frederick Douglass and David Walker is the fact that they both believe that freedom is a natural right of man, wherein racial or class origin does not count. Douglass emphasized its natural basis, while Walker seeks a biblical explanation to it.

Also, Douglass emphasized the aspect of action, fighting for freedom not only of the self but for others, while Walker emphasized the wretchedness of man in slavery (Walker 32). Works Cited: Douglass, Frederick. My Bondage and My Freedom. New York: Miller, Orton & Mulligan, 1855. Print. Walker, David. Walker’s Appeal, in Four Articles; Together with a Preamble, to the Colored Citizens of the World, but in Particular, and Very Expressly, to Those of the United States of America. Boston: The Journal of Pan African Studies, 2009. eBook. Outline: 1. Introduction 2. Frederick Douglass on Freedom 3. David Walker on Freedom 4. Conclusion

A Comparison of Freedom: The Works of Frederick Douglass and David Walker. (2016, Sep 18). Retrieved from https://studymoose.com/a-comparison-of-freedom-the-works-of-frederick-douglass-and-david-walker-essay 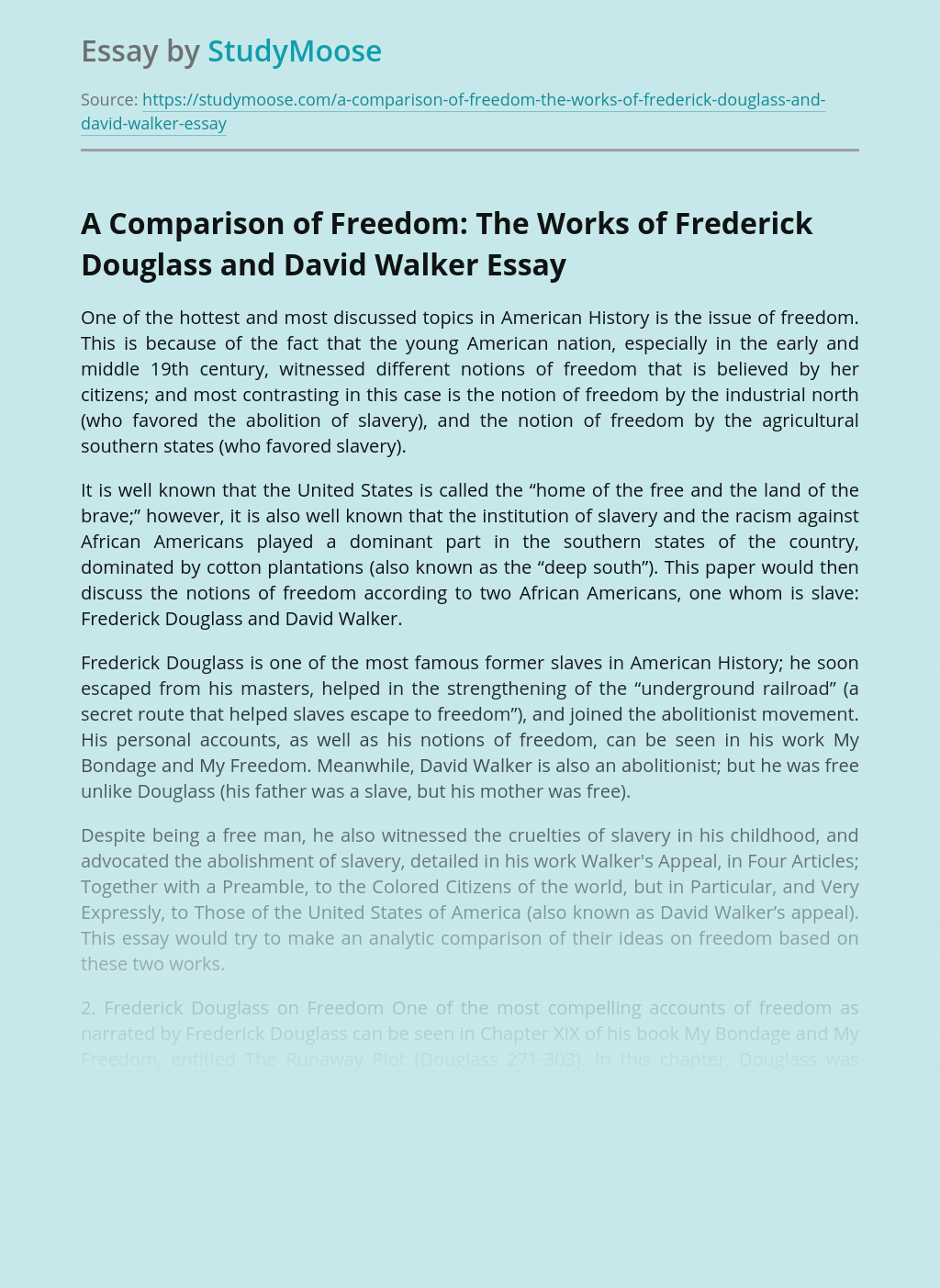 Turn in your highest-quality paper
Get a qualified writer to help you with
“ A Comparison of Freedom: The Works of Frederick Douglass and David Walker ”
Get high-quality paper
Helping students since 2015
Stay Safe, Stay Original