‘Autobiography’ of Benjamin Franklin states that apart from being one of the founding fathers of United States, he was a philosopher, scientist, inventor, a leading writer, publisher and a diplomat too. A person with so many specialties in his personality is rarely seen and when we read the whole book, which has 14 chapters, we come to know that Benjamin Franklin was completely a self-made man. He gained expertise in each field he worked because he did everything in his life with all his interest.

Don't use plagiarized sources. Get your custom essay on
“ Benjamin Franklin and Frederick Douglass as self-made men ”
Get custom paper
NEW! smart matching with writer

Benjamin gives a good description of his life in Philadelphia and his keen interest in literature and hilosophy in this book.

He also had interest in religion prevailing in America during colonial and revolutionary period. He wrote the first five chapters of the book in England in 1771 and after 13 years i. e. , probably in 1884-85 he continued it when he was in Paris. Later when he returned to US in 1788, he completed the book giving the account of his life till he is 57 years old i.

When he was a chool going child he wanted to become a minister but later he dropped this idea as he had great interest in reading and writing. For the first few years, Benjamin apprenticed his brother but soon moved to Philadelphia and worked there for some time. While staying in Philadelphia, Franklin made friends with well-known political figures and then moved to England.

Here he stayed for 18 months with James Ralph who was a good friend of his but later he estranged with him. Then in 1726 he returned to America where he started a debating club in a very short time and called it the Junto.

After two years, with the help of tools and knowledge gained in England, he turned ‘The Pennsylvania Gazette’ into a flourishing publication after taking it over from Keimer. In 1730 Benjamin married his beloved, Deborah Read and had two children. Franklin did printing work for the government holding small positions during 1730s. Later he became postmaster of Philadelphia and also started Poor Richard’s Almanac. He invented Franklin stove by the end of 1730s. 1740s saw him working on various projects like fire brigade, police force, university of Philadelphia and even public works like street weeping service too.

After retiring from printing business in 1748 he conducted various scientific researches on lightning. He was honored with degrees from Harvard and Yale in 1753 and he turned out to be the Postmaster General of America. Next year saw war breaking out between England and France and he participated in the war by drafting proposals that helped bring funds for the war. However the ‘Autobiography’ is left unfinished and is written only up to 1757. The first chapter of his ‘Autobiography’ is addressed to his first son, William Franklin who was born nearly one year after his marriage. He writes,

Dear son: I have ever had pleasure in obtaining any little anecdotes of my ancestors. You may remember the enquiries I made among the remains of my relations when you were with me in England, and the journey I undertook for that purpose. (The Autobiography of Benjamin Franklin, Chapter one, Lines 1-3) First chapter includes his present work and the reasons behind choosing it, some description of his ancestors’, about his early life and his attachment towards reading books. In chapter six, Benjamin mentions a lot of such incidents that made him decide to be simply honest in his dealings in life.

The philosophical lines in chapter six are, I grew convinc’d that truth, sincerity and integrity in dealings between man and man were of the utmost importance to the felicity of life; and I form’d written resolutions. Which still remain in my journal book, to practice them ever while I lived. (The Autobiography of Benjamin Franklin, Chapter six, Paragraph 21, Lines 1-2) Thus we find that Benjamin Franklin worked on lot of projects and expertised his knowledge in various field with the help of his own experiences of life.

He met various people and read variety of books too, which further helped him develop a sense of esponsibility and duty as well also morality and self-improvement. “Narrative of the Life of Frederick Douglass, An American Slave” is a book with eleven chapters that gives us the picture of Douglass’s life as a slave and how keen he was to become a free man. His book has played quite an influential role during the ‘abolition movement’ of early nineteenth century in United States.

The first chapter starts with the information that Douglass is unaware of his date of birth and seems sad about this fact. Then he explains that he lost his mother when he was only seven-year-old but he was taken far away from his mother even before that. He had no idea about who was his father but according to most people he must have been the son of his owner who was a white man. The first time when Douglass could see the brutal side of slavery was when he saw his Aunt Hester being whipped.

The following two three chapters describe the life of slaves of that time and how they were treated along with farms’ structure also. A very important and mentionable point here is the description of the singing of the slaves and this makes the reader have a good deal of admiration for Douglass as he knows far better that slaves are forced to do everything. Douglass mentions incidents of extreme brutality with slaves even if they spoke truth. He also makes the reader aware of how slaves were taught to behave in front of their owners.

In chapter five he starts with life in Baltimore as he was taken there and also mentions that had he not been taken to Baltimore, he would have been slave for the rest of his life without having the feeling of making himself free. Here he started to feel that he could also have better hopes for future and mentions his new mistress, Mrs. Auld as a very kind woman initially but in due course of time turned malicious. Douglass learned to spell small words and read a little bit from Mrs. Auld and he tried to develop his new skill whenever he found time and opportunity.

The following two chapters describe his life in Baltimore and how he learns to read and write for himself and the sufferings due to this skill for him. In chapter six he mentions the difference in the treatments of a city slave and rural slave. He writes, I had resided but a short time in Baltimore before I observed a marked difference, in the treatment of slaves, from that which I had witnessed in the country. A city slave is almost free man compared with a slave on the plantation.

He is much better fed and clothed, and enjoys privileges altogether unknown to the slave on the plantation. Narrative of the Life of Frederick Douglass, An American Slave, Chapter six, Paragraph 4, Lines 1-2) When Douglass was probably ten or eleven years his master died and with the division of property he was sent to the family of Master Hugh. For some time he was moved from one master to another which he extremely hated but had no option other than to follow the instructions of his present master. During these different voyages, Douglass made up is mind to flee from this kind of life and tried to take an account of the direction he was traveling so that it would help him run away from there.

He had very hard time with the kind of work he was allotted and he was even whipped almost weekly just because he was awkward with the work. All this crossed the limit of patience for Douglass and one day when his master Covey tried to tie him he fought and won. After this incident he was never beaten. Douglass was then sent to another farm where he made friends with other slaves and also taught them to read and write. Here he planed to escape with some of the slaves but was caught and sent to jail. After being released from jail he was sent to learn some trade in Baltimore and he worked as a trainee in a shipyard.

Here also white men abused him and his master was kind enough to make him work as a caulker and not go back to the shipyard again. He was even given wages for his work but he had to give them to Master Auld. He writes, In the early part of the year 1838, I became quite restless. I could see no reasons why I should, at the end of each week, pour the reward of my toil into the purse of my master. When I carried to him my weekly wages, he would, after counting the money, look at me in the face with a robber-like fierceness, and ask, “Is this all? he was satisfied with nothing less than the last cent. He would, however, when I made him six dollars, sometimes give me six cents, to encourage me. It had the opposite effect. (Narrative of the Life of Fredrick Douglass, An American Slave, Chapter eleven, Paragraph 3, Lines 1-3)

Somehow Douglass manages and finds his own job and escapes from there and moves to Massachusetts. He mentioned very little about this escape in order to protect the names of persons who helped him in this work. After this he met his fiance and started working on his own.

He then joined an antislavery get-together and fought for the issue from that time onwards. Within four months of the publication of the book, “Narrative of the Life of Frederick Douglass, An American Slave” in 1845, it made a sale of five thousand copies. Douglass sailed to England after the publication of his book and remained there for next two years, as he feared to be recaptured by his legal master. This book eventually gave him the liberty to work for himself and people now believed in the story of his past. He then started a black newspaper too. 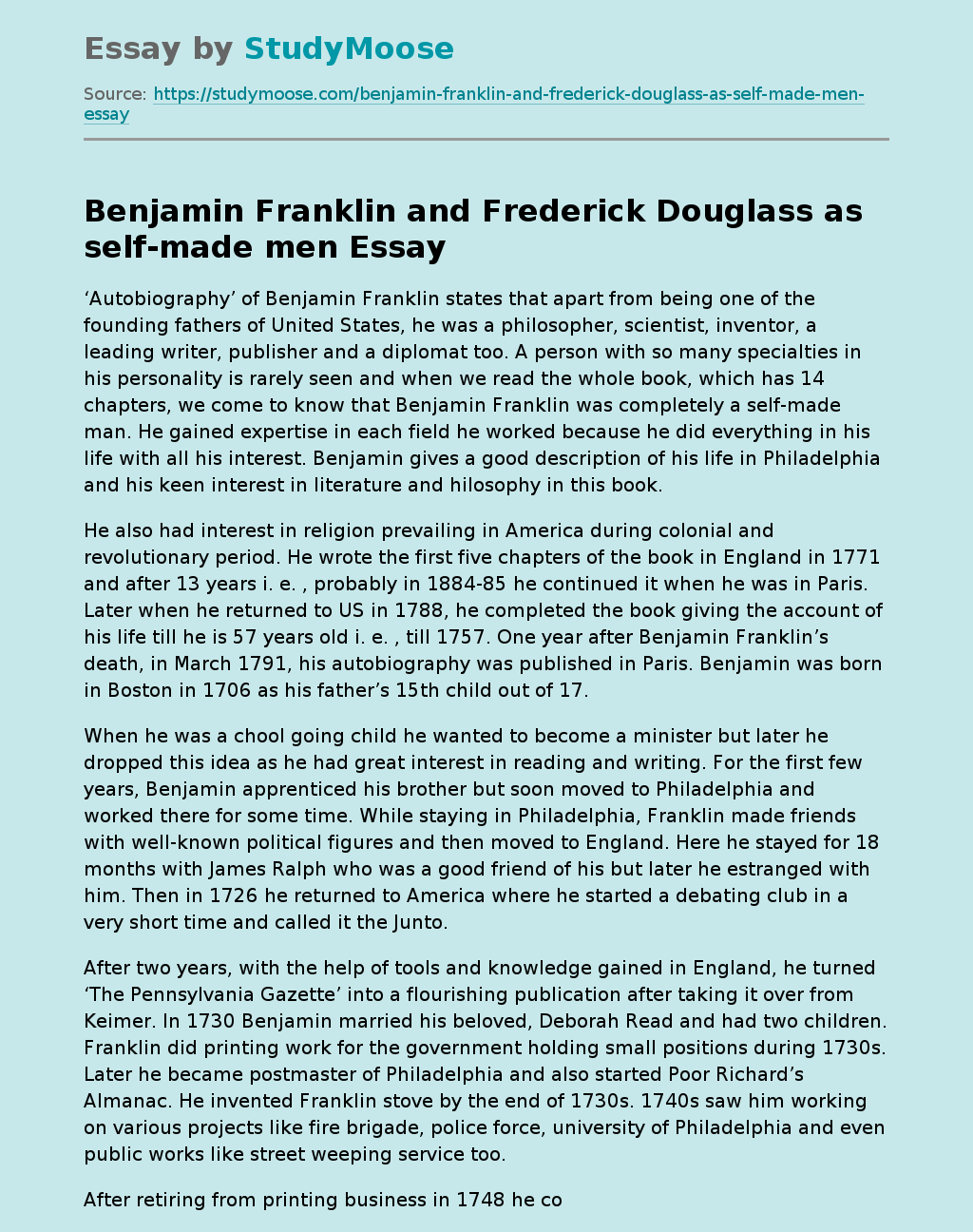