In Frederick Douglass’s narrative essay, “Learning to Read,” he explains how he taught himself how to read and write. His slave owners did not want him to earn an education, since they feared a slave who thought independently. I believe Douglass does not have an enabling figure in his life because he taught himself, through challenging other children, how to read and write.

This was the stepping stone to achieving his education. Douglass overcame various obstacles in his life, such as learning to read and write, and gaining his freedom.

Don't use plagiarized sources. Get your custom essay on
“ Frederick Douglass Learning to Read ”
Get custom paper
NEW! smart matching with writer

Initially, his mistress tutored him, but turned cold-hearted and quit. Luckily, Douglass befriended the little white boys who helped teach him to read.

For example, Douglass claimed, “The plan which I adopted and the one by which I was most successful, was that of making friends of all the little white boys whom I met in the street. As many of these as I could, I converted into teachers” (Douglass 347).

With the aid of the white boys in the neighborhood, Douglass successfully learned to read; in other words, he creatively manipulated a negative obstacle into a powerful tool.

As Douglass became more interested in reading, he contrived little steps to build his writing techniques to a climax. His masters worried that if a slave were to get an education they could endure ideas that would be harmful.

He started to read newspapers and books in the free time he had between errands. This being, as Frederick began to read more he discovered what it really meant to be a slave.

He started to wonder why he would not be free, unlike the other white boys. Douglass began to despise his masters because he considered that everyone should have the freedom to be educated. Thus, as Douglass worked in the ship-yard, he became more familiar with the alphabet.

After learning his first four letters, he began to compose words consisting of them. Next, he would challenge other boys in the neighborhood whether they could write better than him. For example, Douglass expresses, “I would then make the letters which I had been so fortunate as to learn, and ask him to beat that. In this way I got a good many lessons in writing…” (Douglass 349).

This being said, Douglass learned how to write successfully with the lessons learned from challenging the other boys. In conclusion, Douglass recognized the inequality that his masters were making because they thought that slavery and education were not compatible. Succeeding at reading gave him the power to make his own decisions in discovering who he really was. His perseverance emphasizes that the only teacher, who taught him to read and write, was himself.

Frederick Douglass Learning to Read. (2016, May 08). Retrieved from https://studymoose.com/frederick-douglass-learning-to-read-essay 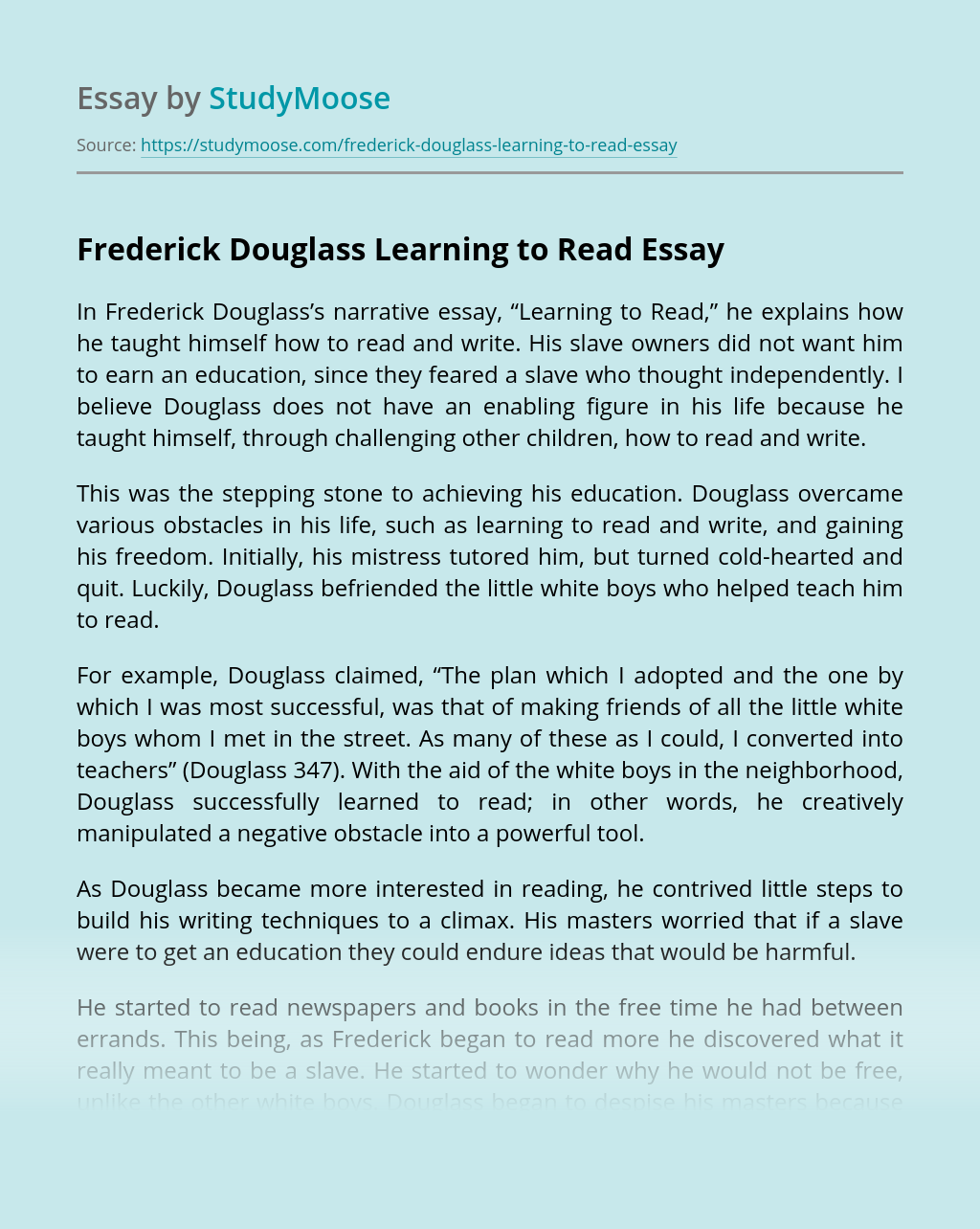