Long ago there was time where, the room was lit by candle light. In everything one could do one needed a candle next to them to make it possible for it to be done. It was not until the birth of Benjamin Franklin and Thomas Edison that this was changed forever. These two great men’s inventions are what make our world today and without it, we would not be as advanced that we are. This will prove that there are many seminaries (interested in electricity, were both scientist and inventors, both improved the world) between Benjamin Franklin and Thomas Edison along with their differences (family valves, Benjamin involved in politics world, Thomas involved in social world), wrapping up with how the two scientists are more similar then different.

Don't use plagiarized sources. Get your custom essay on
“ Compare and contrast Benjamin Franklin and Thomas Edison ”
Get custom paper
NEW! smart matching with writer

Benjamin Franklin and Thomas Edison can resemble each other in more ways then one. For both of the scientists, electricity was a great interest. Franklin believed that lightning was electricity that came from the clouds.

He believed this theory so much that he proposed an experiment to prove it. It would consist of attracting lightning to metal rods resulting in the invention of the lightning rod. Thomas Edison was known for his light bulb. Contrary to popular belief, Edison did not invent the light bulb, just improved a 50-year-old idea. It was Edison’s interest in electricity that brought him to improve the light bulb. Secondly, both of these great men were not only scientist but at the same time inventors too.

Benjamin Franklin will always be known for one of the most important inventions for mankind, Bifocals. This invention changed the lives of many people by the way they see and the convince of it. Not only did Franklin discover Bifocals but also the Lightning Rod, Catheter, and Franklin Stove. Thomas Edison was mostly known for his work he did with the light bulb. He also helped the movie world.

Some may call it the entertainment world instead. He invented the first camera for motion pictures, it was called the Kinetophone. This invention help change the way people provide entertainment forever. Next, these scientist were both great in all ways, they also started something new to add to their greatest. Franklin started the first fire insurance. He came up with the idea when he was 46. He knew with the new technology coming out, that it may be of some need. Thomas Edison worked for newspapers when he was a young boy. He started the first newspaper to ever be printed on a train. He called it the Grand Trunk Herald. Finally, not only was the interest of electricity a big favor in their seminaries but also they both started their lives working in the printing profession. Franklin worked in the printing profession up until he turned 42. There he decided to retire to devote his time to his studies in science. Edison started working for the printing profession as a young boy. When he was twelve, he lost almost all his hearing. Edison believed it was from when he was grabbed by his ears and lifted to a train. With the lost of almost all his hearing, it did not slow Edison down.

Just like the connections, variations are also applied when referring to Benjamin Franklin and Thomas Edison. These two men were very different when it applies to their families. Franklin was very distant from his family. When he moved to Boston, he cut his family completely out of his life. For Edison he claims that his mother is what made him. When he was a boy, there was a disagreement with the teacher that he mother did not like. She in result pulled him from school and continued to teach him herself. She then taught Edison the rest of his schooling. Many believe that this is the reason he quotes his mother made him. Next, along with being a scientist and inventor, Franklin was also at the same time involved in the political world. When he was 70, Franklin was chosen to be in the Pennsylvania Constitutional Convention.

The next year he signed the Treaty of Alliance with France. Right before Franklin passed on he signed the Constitution of the United States of America. Lastly, as for Edison he was involved in a totally different world that many people today would know it as the social world. Edison had invented the first camera for motion pictures. By doing this, it brought him into the entertainment world and later called the social world. Edison even copyrighted the first motion picture ever. It showed his employee Fred Ott pretending to sneeze. By doing this, it started the production of motion pictures. Edison changed the Social world just like Franklin changed the Political world.

After reviewing Benjamin Franklin and Thomas Edison’s achievements, it is recognized that there are more seminaries rather then differences. In history it was even written that Thomas Edison was following in Benjamin Franklin’s footsteps. Both were interested in the same things and the same desires when conducting their experiments and theories. They both enjoyed researching electricity. When researching it they both came up with inventions that changed the world. Even when they were children, they both enjoyed the same careers. They both started out working in the printing profession and then finished their lives with studying science.

Along with being in the printing profession, they both were known to be scientists and inventors. With all the work that they have finished, it led them to discover new things that could improve the world. For example Franklin will always be known for the lightning rod and the bifocals. As will Edison be known for improving the light bulb and starting the entertainment world with the first camera for motion pictures. Without these two men something’s in this world today just would not be here.

This has just proved that there are many seminaries (interested in electricity, were both scientist and inventors, both improved the world) between Benjamin Franklin and Thomas Edison along with their differences (family valves, Benjamin involved in politics world, Thomas involved in social world), wrapping up with how the two scientists are more similar then different. These two scientist and inventors are two great men that have lived. Without some work that they have accomplished, no one would know where the world would be today. 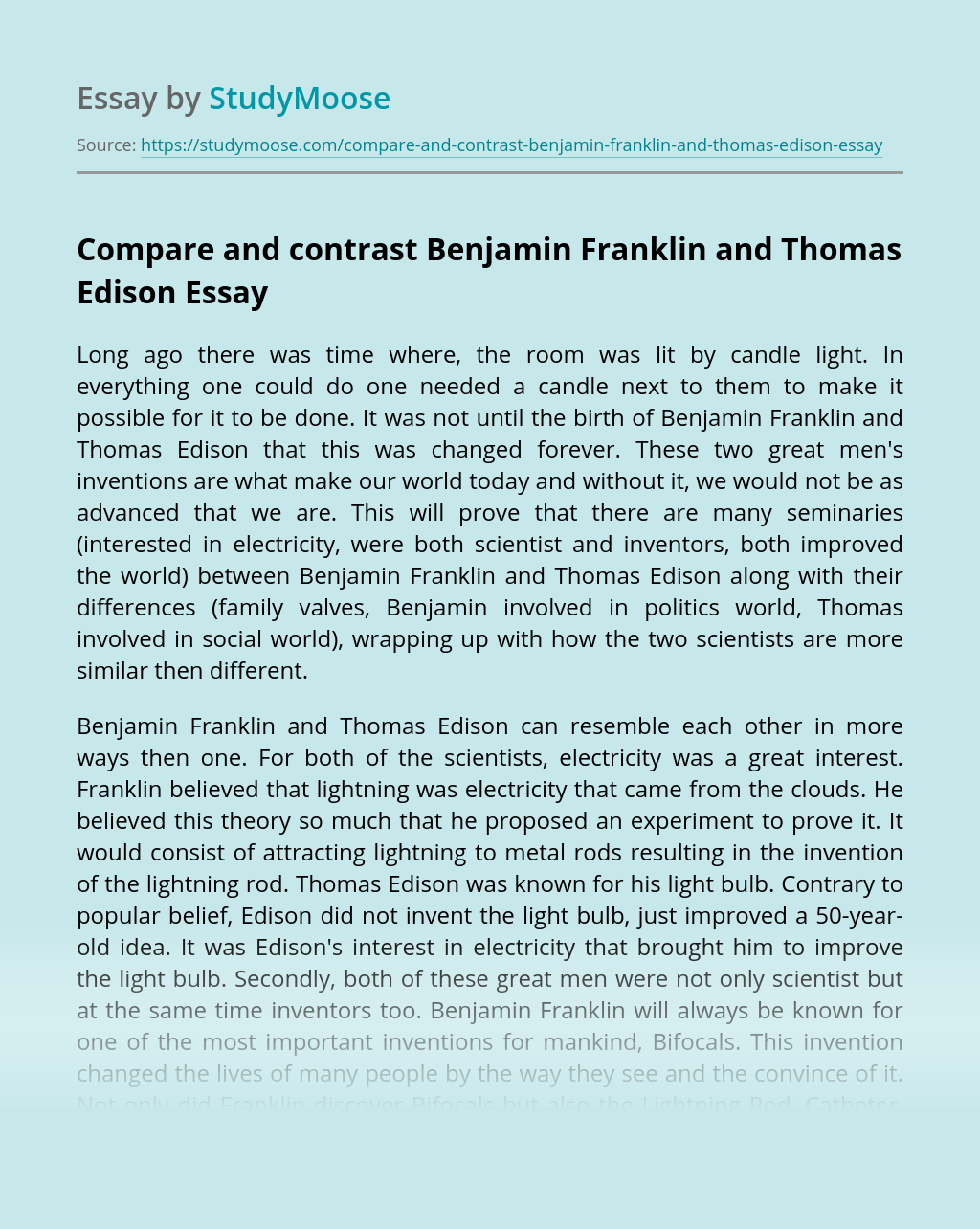