Thomas Edison and the Invention of the Light Bulb

There have been many awesome inventors with inventions still being used in our everyday lives. To choose the greatest invention or discovery of all time would be next to impossible. With all the technology today, all inventions seem as if we could not live without them. Thomas Edison’s light bulb has been one of the biggest impacts on society even to this day.

Thomas wanted to replace the gaslight with a mild, safe, and inexpensive electric light. Edison invented the light bulb in 1879, and to this day the light bulb is still just as useful, if not more so.

Don't use plagiarized sources. Get your custom essay on
“ Thomas Edison and the Invention of the Light Bulb ”
Get custom paper
NEW! smart matching with writer

As time has passed, the light bulb has grown more important with more and more functions. Just think about how many different types of light bulbs we have now… in civilized areas there is hardly 10 sq. feet without at least one light bulb.

When the light bulb was first invented, its main function was to light the houses of millions and to light workplaces for millions more, making work less stressful on workers’ eyes.

This splendid invention allowed manufacturers to extend their workdays by many hours. Ever heard of the “graveyard shift?” This time period, and with the invention of the light bulb is probably where the graveyard shift came into play.

In 1878, the most agreeable source of lighting was gas. Unfortunately, gas was very inconvenient. It was unclean, nasty, unhealthy, uncomfortable and dangerous. When the gas was burned for lighting, it stained the fixtures, roof, and wallpaper with soot created from the gas.

The fixtures pretty much had to be cleaned every day. It polluted the air by putting out soot and used up oxygen. It even made summer days hotter and more deplorable. It caused disasters, such as explosions and fires, not to mention it had to be tended by an adult. As you can see, a change was imperative as far as lighting went.

The light bulb has served many purposes, and also had many effects on the world, probably more than any other invention. For one, the light bulb allowed people to work longer days which made them more money. They also could go home late and still be able to have a meal or do any left over business they had from the day, even though it was already very dark outside. Inside their homes, it was as if the sun was not even down and gone yet. This was a very new feeling and concept to people from that era. This also led manufacturers to generate a larger amount of products because of the extended work hours. Social events, such as parties and meetings, could also take place in the evening now. Things that were unable to perform or complete by lantern or candlelight after a long hard day of work, could also now be accomplished.

Still, to this day, the light bulb is a part of our everyday lives. It hasn’t been modified or improved that much either. In a way, we almost take for granted the fact that without Thomas Edison’s extreme dedication and hard labor, we might still be forced to stop most all activity at sundown and before sunrise. The light bulb is used in almost every grocery store, shopping mall, business office, school, park, library, home, and at things like the movies and parties. The light bulb brightens our town streets and allows us to do everyday activities, such as drive our vehicles or read a book, after the sun sets and disappears. The light bulbs serves as a forewarning light for any implement in the air, on the ground, or on the water. They are also used in the field of technology, such as in microscopes, computer screens, televisions, game boys, and the little blinker on your printer!!

Thomas Edison’s first light bulb burned for 40 hours. He had difficulty making it work at first. For decades, inventors and businessmen had been trying to invent a better light source, one powered by electricity. They had already worked out the basic idea and outline of their electric powered light. It would be made of a filament in a vacuum, and when a current was passed through the filament it would glow… (ta da!) light. However, they could not get it to work the correct way. The root of the problem was finding a filament that would not disintegrate. Edison literally played the “guess and check” game thousands of times over and over.

He sent men all over the world, bringing him every kind of possibly imaginable filament. The man was determined to find it! He even tried a strand of his own hair. For a while, the filament most commonly used was carbon, but since the vacuums were not strong enough, it quickly disintegrated. After many more experiments, and a much stronger vacuum, Edison discovered that a carbon filament, bent into the shape of a horse shoe, would glow for 100 hours. With this discovery, Edison and his colleagues opened the flood gates to even better, modified versions of his original light bulb.

Thomas Edison made a considerable amount of money off his inventions. Despite this, he was not as brilliant a business man. He went on to create half a dozen electric companies, a few of which are still with us today. One of his companies, Edison General Electric, changed their name to General Electric because Edison had run out of shares in the business. Dropping the name was a symbol of actually dropping Edison himself. He had made a very good amount of money but also, unfortunately, had sold out too soon.

Without light bulbs our world would be much different than it is today. It would most likely not be as developed as it is today either. Without the extra work hours, extra hours at home, and seeing ability after dark, many other inventions would have come around much slower. We owe Thomas Edison a major thank you for his contributions to today’s technology. If we didn’t have the knowledge and inventions of Edison some of today’s inventions would never have existed.

Thomas Edison and the Invention of the Light Bulb. (2016, Jun 26). Retrieved from https://studymoose.com/thomas-edison-and-the-invention-of-the-light-bulb-essay 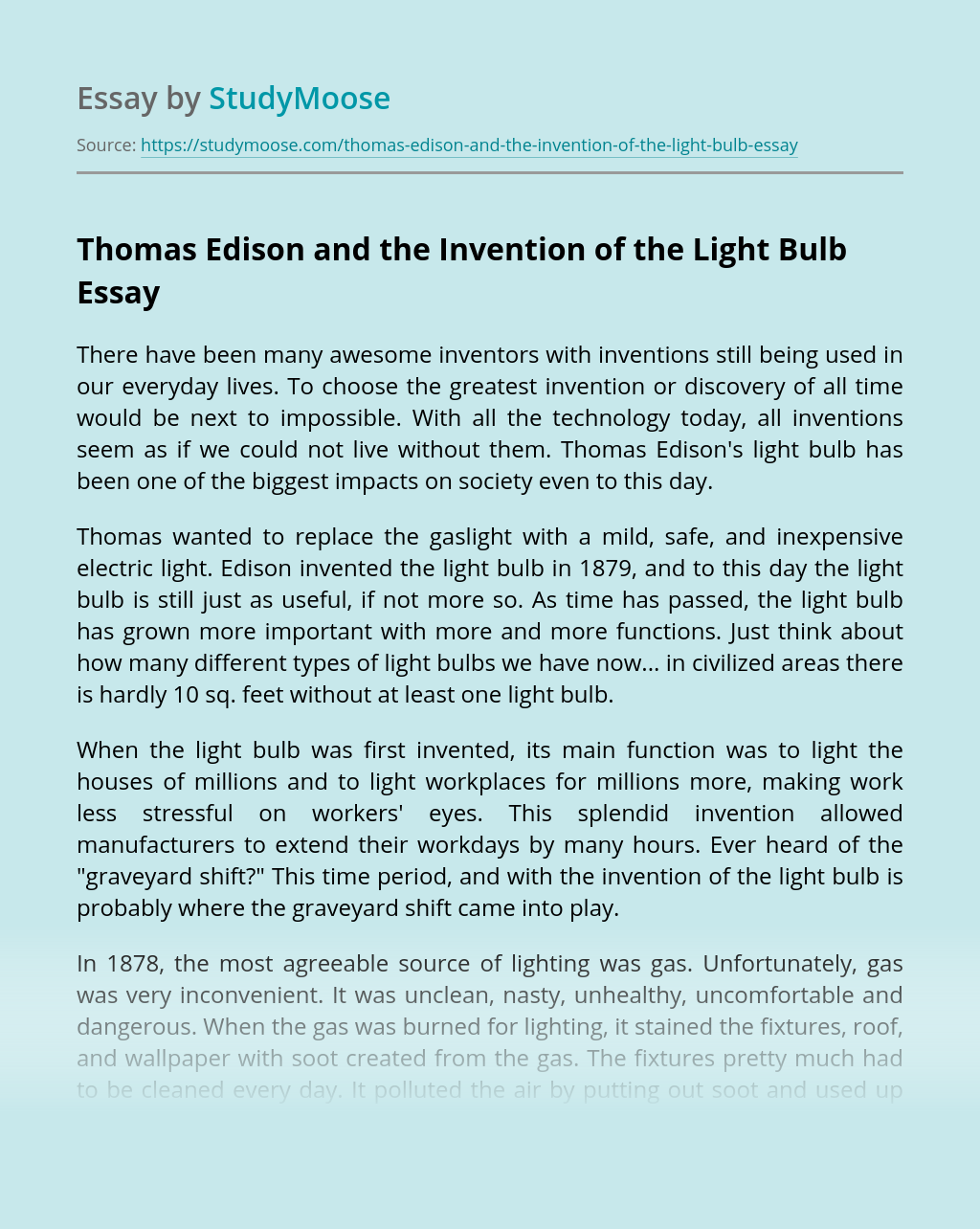