Hester disobeyed their owner and he started to punish her. ”… He led her to a stool under a large hook in the joist, put in for the purpose… ” (Douglass pg4) Made her get on top of the stool tied her to the hook and “…he commenced to lay on the heavy cowskin and soon the warm, red blood came dripping to the floor…” (Douglass pg 5) “I was so terrified and horror-stricken at the sight, that I hid myself in a closet and dared not to venture out till long after the bloody transaction was over.

(Douglass pg 5)With this quote he is subtly saying “If you want to know about slavery I can tell you about slavery because I was there, I lived it. ” For the fact that he was there and witnessed this event gives him ethos. Around the middle of the second chapter Douglass talks about an overseer named Mr. Severe. Mr. Severe was the overseer of Colonel Lloyd’s, who was Douglass’ owner, plantation.

“Mr. Severe was rightly named: he was a cruel man.

I have seen him whip a woman, causing the blood to run half an hour at a time; and this, too, in the midst of her crying children, pleading for their mother’s release. ” (Douglass pg 7) Again this same situation where he is telling the audience that he knows what he is talking about because he witnessed and lived it so therefore he has enough credibility to talk about it. This quote shows that he knows exactly what he is talking about so he has the ethos to tell the audience what a slave’s life was like. In the middle of chapter two Douglass talks about how the slaves were not given beds.

He said “…They found less difficulty from the want of beds, than from the want of time to sleep…” (Douglass pg 6) “…Very many of their sleeping hours are consumed in preparing the field for the coming day; and when this is done, old and young, male and female, married and single, drop down side by side, on one common bed,-the cold, damp floor,- each covering himself of herself with their miserable blankets…” (Douglass pg 6) He says this to evoke emotion into the audience the phrase “the cold, damp floor,” and the parallel structure “old and young, male and female, married and single” evokes emotion.

This is a strong appeal to pathos in his argument. In the beginning of chapter eight Douglass talks about when he went to live in Baltimore. He talks about His old master’s youngest son dying and then three years later his old master died. So his property was valued and he was sent for to be valued with the other property. “…Here again my feelings rose up in detestation of slavery. I had now a new conception of my degraded condition……I left Baltimore with a young heart overborne with sadness, and a soul full of apprehension. (Douglass pg 27) He says this and these lines evoke so much emotion. With the phrase “a young heart overborne with sadness” and the use of other emotional words and phrases get the audience going. So this is also an example of a strong appeal to pathos. Around the middle of chapter six Douglass talks about going to live with Mr. and Mrs. Auld. Mrs. Auld started to teach him the A, B, Cs. After he learned that he was learning to spell words of three or four letters. At that point Mr. Auld found out and told Mrs. Auld not to instruct him further.

He said Mr. Auld said “’… if you teach that nigger how to read, there would be no keeping him. It would forever unfit him to be a slave. He would at once become unmanageable and of no value to his master …It would only make him discontented and unhappy. ’ These words sank deep into my heart… I now understood what had been to me a most perplexing difficulty-to wit, the white man’s power to enslave the black man. ”(Douglass pg 20) This is his epiphany or his allegory of the cave moment when he realizes what is actually going on.

He thought logically for a long time and he finally found what he was looking for. This quote is an appeal to logos. Early on in chapter nine Douglass talks about his Master Thomas Auld. He says he always got enough to eat everywhere else he went but not with Master Thomas. “I have said Master Thomas was a mean man … Not to give a slave enough to eat, is regarded as the most aggravated development of meanness even among slaveholders. The rule is, no matter how coarse the food, only let there be enough of it… Master Thomas gave us enough of neither coarse nor fine food. (Douglass pg 31)

This is a syllogism he is saying Mean slave owners don’t give their slaves enough to eat, Master Thomas doesn’t give his slaves enough to eat therefore Master Thomas is a mean man. A syllogism appeals to logos so this quote appeals to logos. To conclude, Frederick Douglass uses metaphors and personal anecdotes to appeal to the three rhetorical appeals Ethos, Pathos, and Logos. His book Narrative of the life of Frederick Douglass is filled with examples of these appeals. Personal anecdotes give him Ethos, Parallel structure appeals to Pathos, and logical thinking appeals to Logos. 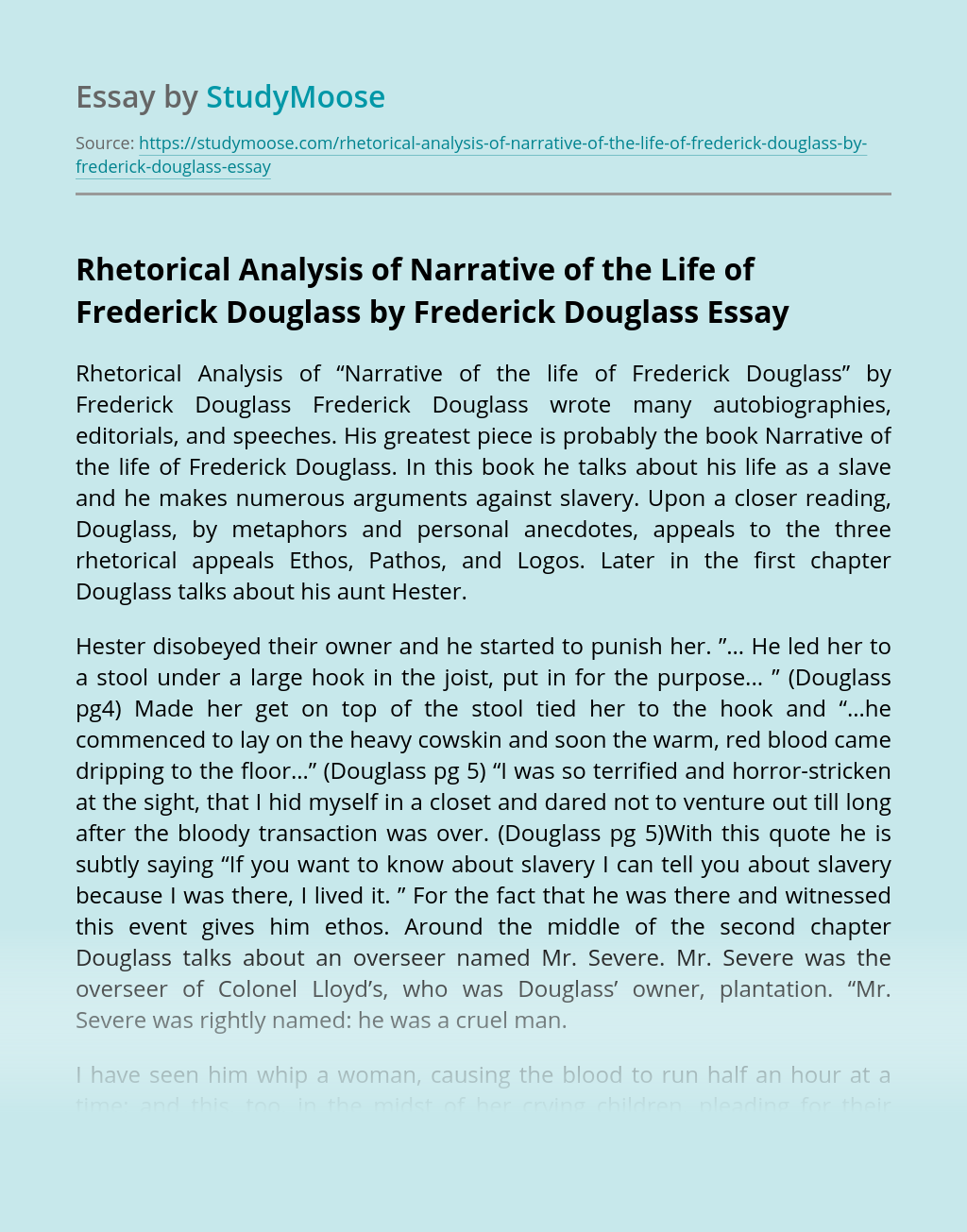