The “Narrative life of Frederick Douglass”

The “Narrative life of Frederick Douglass” was more than an autobiography. It summarized historically, politically and legally what it was like to be a slave back in the 1840’s and on, but through he’s experience & journey also provided a much broader picture and detailed insight of what actually takes a slave to gain freedom and how each individual must free themselves from slavery rather than thinking that is just something that its given. In he’s autobiography; Douglass writes all of the hardships he encountered since he was born until the day that he becomes a free man.

Don't use plagiarized sources. Get your custom essay on
“ The “Narrative life of Frederick Douglass” ”
Get custom paper
NEW! smart matching with writer

His words transmit such emotion and feeling that its almost unbearable to read and believe all the horrors that took place that for many, many years slaves had to endure. With perseverance Frederick Douglass escaped slavery, he made himself free mentally & physically and he explains just how luckily he was to achieve that.

Just like the majority of slaves, Frederick Washington Bailey learned very young that he as a human being had no value or respect in a “white mans world”.

He estimated his birthday, he didn’t know he’s white father’s whereabouts and was separated from his family young enough to barely remember. Throughout his life, under the ownership of various Masters, Douglass experienced many life-changing battles. While Douglass lived in the wye plantation, he witnessed the cruelty of slavery first hand. Beatings, starvation, cruelty like that off his aunt Hester (that was whipped to death), the murder of Demby, and he’s wife cousins (a young girl, babysitter) that was also brutally beaten by Mrs.

Hicks. Death and whippings left and right and no penalties were given.

Under Mr. Covey’s the slave – Breaker command, Douglass mentions no one had ever worked him so hard to the point where he though of committing suicide because he was so exhausted. Until then, Fredrick describes its readers how a “ man was made a slave” stripped from his entire god given rights and privilege’s. Continuously after what happens with Mr. covey, for the rest of the narrative, Douglass fights back and regains strength that he had lost for a very long time at obtaining his freedom and transforming the slave he had become back into the man he was supposed to be.

In August 1833, the most important turning point in Douglass’s life takes place. One afternoon when Covey tries to tie him down and whip him, Douglass decides to fight back and grabs Mr. Covey by the neck. For a period of two hours the two of them go at it and Douglass makes it clear that he will no longer be treated as an animal nor a brute. In he’s autobiography he states, “This battle with Mr. Covey was the turning-point in my career as a slave. It rekindled the few expiring embers of freedom, and revived within me a sense of my own manhood. It recalled the departed self-confidence, and inspired me again with a determination to be free. The gratification afforded by the triumph was a full compensation for whatever else might follow, even death itself”(43). After the fight, Covey shows that the most important thing to him is his reputation as a slave-breaker. He lets Douglass get away with it rather than tell anyone, and for the remaining time there he was never whipped again.

Even though I believe this is the biggest turning point that made realize Douglass he shouldn’t stand for it much longer physically, I believe mentally he was privileged and had a better advantage at becoming a better man from the moment Mrs. Auld thought him the alphabet. He also becomes enlighten when he overhears Mr. Auld confess the strategy white men use to enslave the blacks. Mr. Auld states,” if you give a nigger an inch, he will take an ell, a nigger should know nothing but to obey his masters- to do as he is told to do, if you teach that nigger (speaking of myself) how to read, there would be no need in keeping him”(20). This opens Douglass’s eyes into discovering what he needed to do in Oder to be free, he says, “ I understood the pathway from slavery to freedom” (20). It was from this moment on I believe Fredrick Douglass had the advantage to stand up for himself. After that, the narrative explains further his attempt escapes until he finally succeeds and is able to do so. With the help and courage of other slaves, he’s wife, books and readings such as the “Columbian Orator”, white antislavery abolishers; Fredrick Washington Bailey became Fredrick Douglass.

His determination and non-stop fighting is what ultimately gave Douglass freedom. After Douglass escaped to the north, he finally had achieved what he most desired freedom. He supported many abolitionists’ movements and decided to support and encourage others to do the same. Fredrick Douglass worked for everything he accomplished and along doing so reviled the many horrors that occurred during a time where black were considered nothing but simply property. That’s what makes this Narrative unlike any other. He’s detailed description of events and heart warming stories serves more than a simple historical memoir. His autobiography will continue to expose and educate people of the atrocities that existed in the time of slavery.

The “Narrative life of Frederick Douglass”. (2016, Mar 16). Retrieved from https://studymoose.com/the-narrative-life-of-frederick-douglass-essay 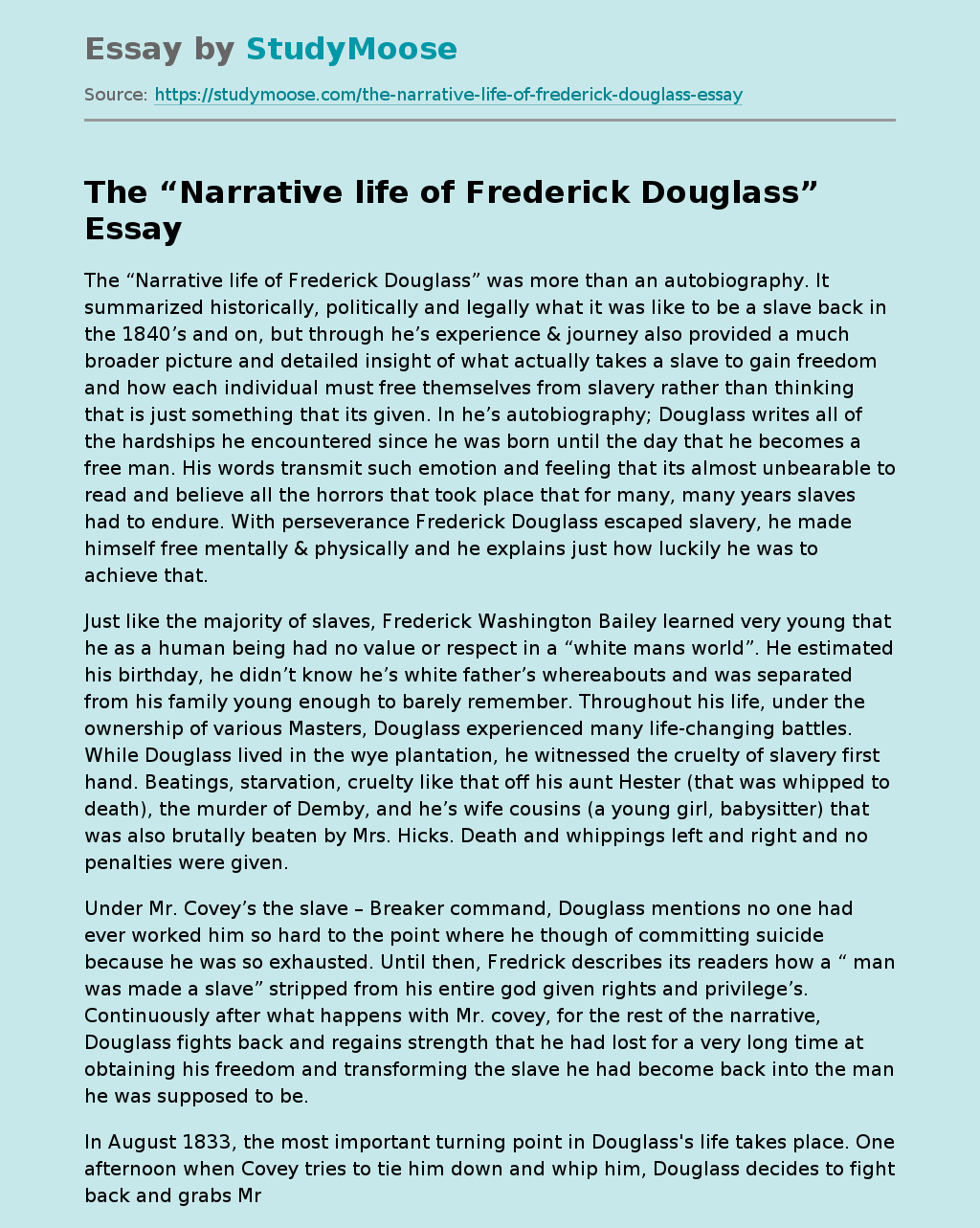