Mother Tongue and How To Tame A Wild Tongue Essays Analysis

“Identity is the essential core of who we are as individuals, the conscious experience of the self inside” – Kaufman (Anzuldύa 62). Coming to America and speaking more than one language, I often face similar situations as Gloria Anzaldύa and Amy Tan. Going to high school where personal image is a big part of a student’s life is very nerve racking. American Values are often forced upon students and a certain way of life is expected of them. Many times, in America, people look down on people who do not accept the American Way of Life.

Don't use plagiarized sources. Get your custom essay on
“ Mother Tongue and How To Tame A Wild Tongue Essays Analysis ”
Get custom paper
NEW! smart matching with writer

The struggle of “fitting in” and accepting the cultural background is a major point in both essays, _Mother Tongue_ by Amy Tan and _How to Tame a Wild Tongue_ by Gloria Anzaldύa, which the authors argue similarly about. Both essays can be related to my life as I experience them in my life at home and at school.

High school also has an unparalleled reputation of students trying to “fit in” with their peers and peer-pressure causing people to accept values different to their own, which is similar to Anzaldύa’s case.

In Anzaldύa’s essay, she reflects on the situation that many people face in a contact zone of many different cultures. She begins by explaining how she felt unaccepted by all groups, Americans, Mexicans, and other Spanish speakers. Many people are also forced accept certain cultures over the other. Anzaldύa “was accused by various Latinos and Latinas” of a being a “‘Pocho, cultural traitor'”.

Anzaldύa was rejected by many Latinos and did not mix well with Americans either. Gaining respect of peers is also very hard in high school.

Living with parent that speaks “broken English” is similar in all households and presents similar hardships. In _Mother Tongue_, Amy Tan mainly focuses on the hardships of adapting to American culture. Tan also avoids to being in situations where her mother tries to express herself. Amy is “red-faced and quit” while her mother “was shouting at [the stockbroker’s] boss in her impeccable English” (Tan 317). Amy is often embarrassed of her mother’s “broken” English and avoids speaking up in those situations.

In both essays, the authors explain the consequences of foreign language speakers face in an American predominant society. Anzaldύa is usually afraid to express herself truly because many times the outcomes discourage her to do so. Anzaldύa recalls “being caught speaking Spanish at recess [which] was good for three licks on the knuckles with a sharp ruler” and “being sent to the corner of the classroom” for “trying to tell [the teacher] how to pronounce [her] name”. The outcome of trying to express herself in her true nature often got her punished severely.

Tan feels less fortunate to have been in an immigrant family because many of her opportunities were taken away because of that. While growing up, Tan believed that because her “mother’s English …had an effect on limiting [her] possibilities in life” (Tan 318). Amy Tan thought that while living in fear of not “fitting in”, the opportunities were taken away from her. The stunted language skill development, in immigrant families, could affect their success in school and other achievement tests (Tan 318).

The essays differ from each other because in Amy Tan actually accepts parts of American culture, while Anzaldύa resists including the American lifestyle into her own completely. Anzaldύa is bitter about the fact that she is forced to accept the American culture. She claims that “required…two speech classes…to get rid of [the] accent [were] a violation of the First Amendment” (Anzaldύa 54). But Amy Tan struggles to incorporate the American lifestyle at many times. Tan fights the stereotype “Chinese students go into engineering” and struggles to excel in English rather than engineering (Tan 319).

In conclusion, in America, foreign language speakers often feel disadvantageous to Americans that have more resources to exploit. But both authors still agree that preserving their heritage is important and should it should not be lost while trying to “fit in”. While speaking many languages and going to high school in America, the essays are closely related to my own life. I realized that gaining some new culture and losing some of the old culture is best to adapt to the new a country and different people. Balancing the cultures and languages forms our identity.

Mother Tongue and How To Tame A Wild Tongue Essays Analysis. (2016, Jul 27). Retrieved from https://studymoose.com/mother-tongue-and-how-to-tame-a-wild-tongue-essays-analysis-essay 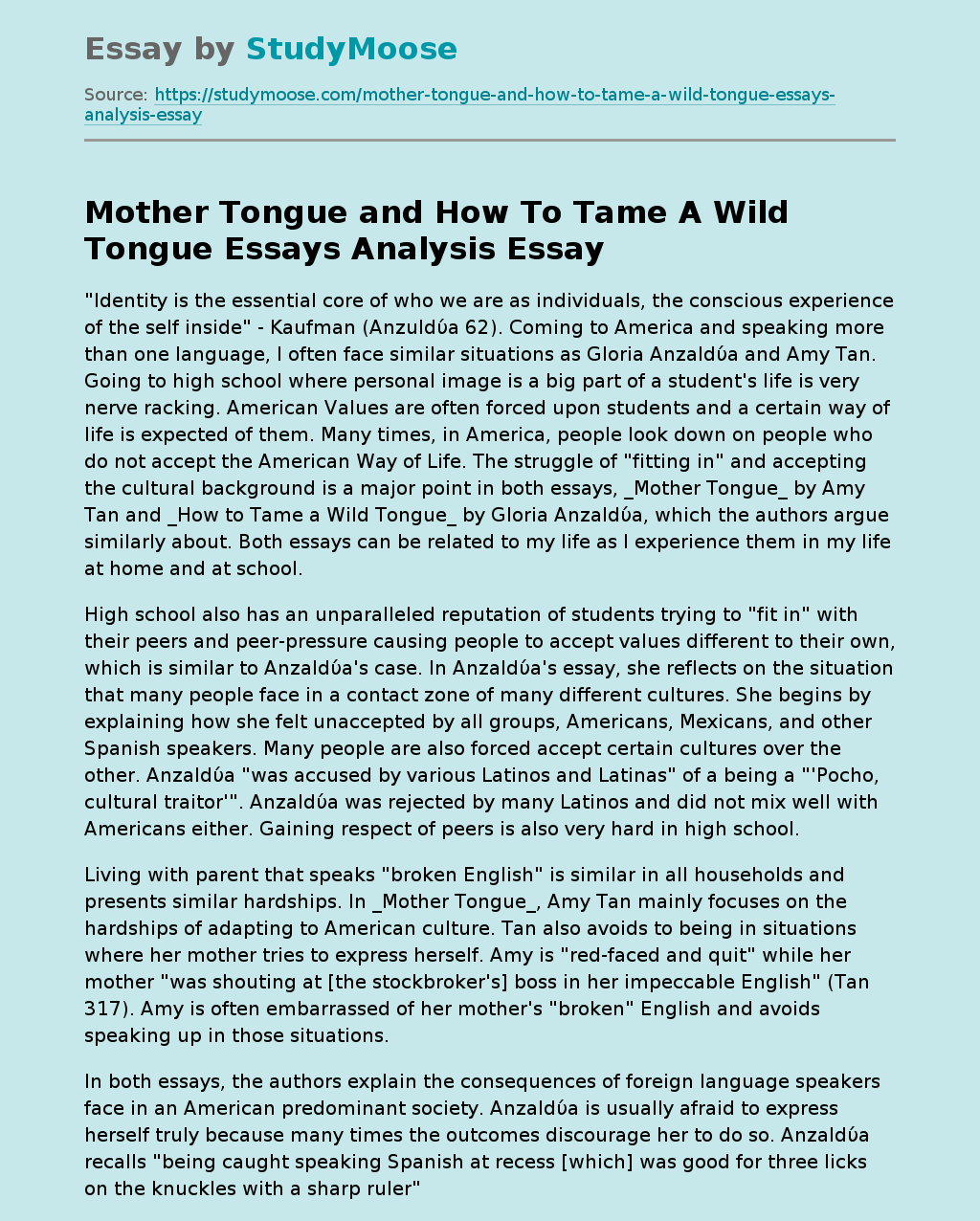