Turn in your highest-quality paper
Get a qualified writer to help you with
“ Mechanical Engineering ”
Get high-quality paper
NEW! AI matching with writers

Mechanical engineers use these core principles along with tools like computer-aided engineering, and product lifecycle management to design and analyze manufacturing plants, industrial equipment and machinery, heating and cooling systems, transport systems, aircraft, watercraft, robotics, medical devices, weapons, and others.

Mechanical engineering finds its application in the archives of various ancient and medieval societies throughout mankind.

In ancient Greece, the works of Archimedes (287 BC–212 BC) deeply influenced mechanics in the Western tradition and Heron of Alexandria (c. 10–70 AD) created the first steam engine.[2] In China, Zhang Heng (78–139 AD) improved a water clock and invented a seismometer, and Ma Jun (200–265 AD) invented a chariot with differential gears. The medieval Chinese horologist and engineer Su Song (1020–1101 AD) incorporated an escapement mechanism into his astronomical clock tower two centuries before any escapement can be found in clocks of medieval Europe, as well as the world’s first known endless power-transmitting chain drive.

During the years from 7th to 15th century, the era called the Islamic Golden Age, there were remarkable contributions from Muslim inventors in the field of mechanical technology. Al-Jazari, who was one of them, wrote his famous Book of Knowledge of Ingenious Mechanical Devices in 1206, and presented many mechanical designs. He is also considered to be the inventor of such mechanical devices which now form the very basic of mechanisms, such as the crankshaft and camshaft.

Important breakthroughs in the foundations of mechanical engineering occurred in England during the 17th century when Sir Isaac Newton both formulated the three Newton’s Laws of Motion and developed Calculus, the mathematical basis of physics. Newton was reluctant to publish his methods and laws for years, but he was finally persuaded to do so by his colleagues, such as Sir Edmund Halley, much to the benefit of all mankind. Gottfried Wilhelm Leibniz is also credited with creating Calculus during the same time frame.

During the early 19th century in England, Germany and Scotland, the development of machine tools led mechanical engineering to develop as a separate field within engineering, providing manufacturing machines and the engines to power them.[5] The first British professional society of mechanical engineers was formed in 1847 Institution of Mechanical Engineers, thirty years after the civil engineers formed the first such professional society Institution of Civil Engineers.[6] On the European continent, Johann von Zimmermann (1820–1901) founded the first factory for grinding machines in Chemnitz, Germany in 1848.

Education
Degrees in mechanical engineering are offered at universities worldwide. In Brazil, Ireland, Philippines, Pakistan, China, Greece, Turkey, North America, South Asia, India, Dominican Republic and the United Kingdom, mechanical engineering programs typically take four to five years of study and result in a Bachelor of Engineering (B.Eng), Bachelor of Science (B.Sc), Bachelor of Science Engineering (B.ScEng), Bachelor of Technology (B.Tech), or Bachelor of Applied Science (B.A.Sc) degree, in or with emphasis in mechanical engineering. In Spain, Portugal and most of South America, where neither BSc nor BTech programs have been adopted, the formal name for the degree is “Mechanical Engineer”, and the course work is based on five or six years of training. In Italy the course work is based on five years of training, but in order to qualify as an Engineer you have to pass a state exam at the end of the course. In Greece, the coursework is based on a five year curriculum and the requirement of a ‘Diploma’ Thesis, which upon completion a ‘Diploma’ is awarded rather than a B.Sc. 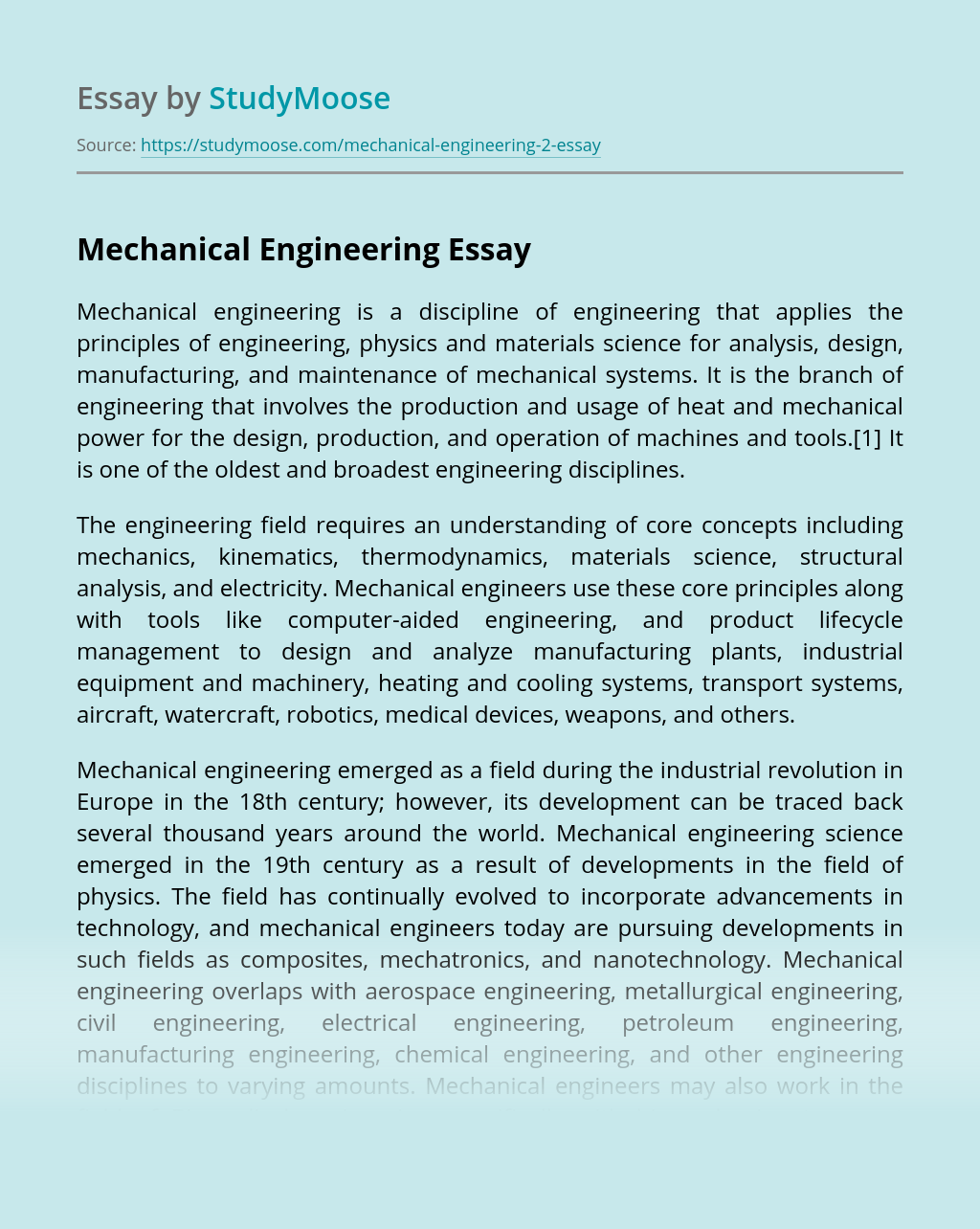 Turn in your highest-quality paper
Get a qualified writer to help you with
“ Mechanical Engineering ”
Get high-quality paper
Helping students since 2015
Stay Safe, Stay Original