Leader Member Exchange Theory
Considerable research has shown that leaders can significantly influence individual, group, and organizational performance (Gerstner & Day, 1997; Judge, Piccolo, & Ilies, 2004; Lowe, Kroeck & Sivasubramaniam, 1996). Different leadership theories articulate a number of mechanisms through which leaders have such influences (Northouse, 1997). An alternative approach to understanding leaders’ influence on individual follower or subordinate effectiveness is through the focus on dyadic relationships between leaders and each of their subordinates (Dansereau et al.

, 1975). LMX, originally called vertical dyadic linkage (VDL), was developed approximately 30 years ago by Dansereau et al. (1975) as a response to average leadership style (ALS), which assumed that leaders maintain similar relationships with all of their employees.

LMX broke away from this conceptualization by highlighting the way leaders differentiate between their subordinates by creating in- groups and out-groups. In-group members have high quality exchanges characterized by “mutual trust, respect, and obligation” (Graen & Uhl-Bien: 227), whereas out-group members have low quality exchanges that have less trust, respect, and obligation.

LMX is a dyadic theory that has its roots in role theory (Dienesch & Liden, 1986; Kahn, Wolfe, Quinn, Snoek, & Rosenthal, 1964) and social exchange theory (Blau, 1964; Cropanzano & Mitchell, 2005). The basic principle of leader–member exchange (LMX) is that leaders develop different types of exchange relationships with their followers and that the quality of these relationships affects important leader and member attitudes and behaviors (Gerstner & Day, 1997; Liden et al., 1997; Sparrowe & Liden, 1997).

LMX suggests that supervisors choose those they like and / or view as strong performers to fill the more important organizational roles.

Such relationships include the exchange of material and nonmaterial goods that extend beyond what is specified in the formal job description (Liden et al., 1997; Liden & Graen, 1980). Research on leader–member exchange (LMX) has shown the value of high-quality leader–member relationships in organizations (Graen & Uhl-Bien, 1995; Liden, Sparrowe, & Wayne, 1997). Leaders and followers in these high-LMX relationships often report enhanced levels of satisfaction and effectiveness, as well as mutual influence, more open and honest communication, greater access to resources, and more extra-role behaviors (Gerstner & Day, 1997). Low-quality relationships, in contrast, appear to put subordinates at a relative disadvantage in terms of job benefits and career progress (Vecchio, 1997). In low-quality relationships, members receive less access to the supervisor, fewer resources, and more restricted information, potentially leading to dissatisfaction in the job, lower organizational commitment, and employee turnover (Gerstner & Day, 1997).

Sparrowe and Liden noted, “the quality of the member’s exchange relationship with the leader, which is based on the degree of emotional support and exchange of valued resources, is pivotal in determining the member’s fate within the organization” (1997, p. 522). In support of the theory, empirical research indeed has demonstrated that LMX has significant influences on outcomes such as task performance, satisfaction, turnover, and organizational commitment (Gerstner & Day, 1997). So much research on LMX has accumulated, with the large majority focusing on outcomes, that a meta-analysis (Gerstner & Day, 1997), three literature reviews (Graen & Uhl-Bien, 1995; Liden, Sparrowe, & Wayne, 1997; Schriesheim, Castro, & Cogliser, 1999), and a new book series (Graen, 2004) have been conducted. All five of these research efforts state that positive organizational and individual outcomes are the primary results of high-quality LMX relationships.

These positive outcomes are based on role the ory and social exchange theory as subordinates in high quality exchanges receive better roles, increased communication, higher levels of trust, and increased access to the supervisor. Some of these positive outcomes include higher performance ratings, better objective performance, increased commitment. A number of other LMX studies have focused on how leader and member characteristics such as gender (Milner et al., 2007), socio-economic status (Duchon, Green, & Taber, 1986), and age and education (Tsui & O’Reilly, 1989) may influence the leader-member relationship. In particular, the relationship between gender and LMX has been well documented. Research has shown that supervisors with same-sex subordinates are likely to develop higher quality LMXs than those supervisors of the opposite sex (Milner et al.; Wayne, Liden, & Sparrow, 1994). Further, Lee (1999) found that perceived quality of LMX affects subordinates’ expectations in overall communication patterns with the supervisors depending on their gender. Additionally, correlations between subordinates and supervisor rating of LMX were significantly higher for female subordinates of female supervisors than for female subordinates of male supervisors (Varma & Stroh, 2001). LMX theory articulates the development of a work relationship between the supervisor and the subordinate. LMX researchers proposed various models of this process (Dienesch & Liden, 1986; Graen & Scandura, 1987; Graen & Uhl-Bien, 1995).

Graen and Scandura’s (1987) role-making model described LMX as comprised of three phases: role-taking, role-making, and role routinization. In the role-taking stage, the leader makes a request or assigns a task and evaluates the member’s behavior and performance to assess the underlying motivation and potential. This phase corresponds to the first step in Dienesch and Liden’s (1986) model in which demographic characteristics and personalities may influence the initial interaction between the two parties. Role-making is the continuation of the developmental process where the nature of the leader–member relationship becomes more defined. It is at this stage that managers and subordinates begin to cement the relationship (Bauer & Green, 1996). The leader provides an opportunity to the member by assigning an unstructured task. If the member accepts that opportunity, the relationship continues to develop into a high-quality exchange relationship (Liden et al., 1997). The third stage is role routinization.

At this point, leader and member develop a common understanding and clear mutual expectations. The behaviors of the leader and member become interlocked (Graen & Scandura, 1987) and the quality of exchange typically remains stable after this phase (Liden et al., 1997). Perspective taking involves the ability to consider and appreciate the perceptions and viewpoints of others and “see the world through their eyes.” As individuals take the perspectives of others, they understand others‟ behaviors in a way closer to how they understand their own behaviors. As Davis, Conklin, Smith, and Luce (1996) have pointed out, “self/target overlap” occurs when we take another’s perspective, and the perceived others becomes more self alike. Kuhnert and Lewis suggested that supervisors‟ perspective taking capacity (how many perspectives they are able to hold simultaneously) is manifested in the degree to which their leadership styles are characterized as transactional versus transformational.

The authors argue that managers who take others‟ perspectives as part of their own perspective (Kegan stage 3) are likely to engage in transactions of higher quality, involving “non-concrete” rewards such as emotional support, mutual respect, and trust. Managers who are unable to effectively integrate others‟ perspectives into their own (Kegan stage 2), are more likely to have transactions of a lower quality with their subordinates, based on “concrete” rewards such as pay increases, benefits, or other tangible outcomes. References

Mayer D.M. (2004). Are you in or out? A group-level examination of the effects of LMX on justice and customer satisfaction. (Doctoral dissertation) University of Maryland. Remus Ilies, J. D. (n.d.). Leader–Member Exchange and Citizenship Behaviors: A Meta-Analysis . journal of applied psychology, 269-271. Terri A.Scandura, E. K. (2009). Trust and Leader Member-Excahnge. Journal of Leadership and organizational studies, 109. 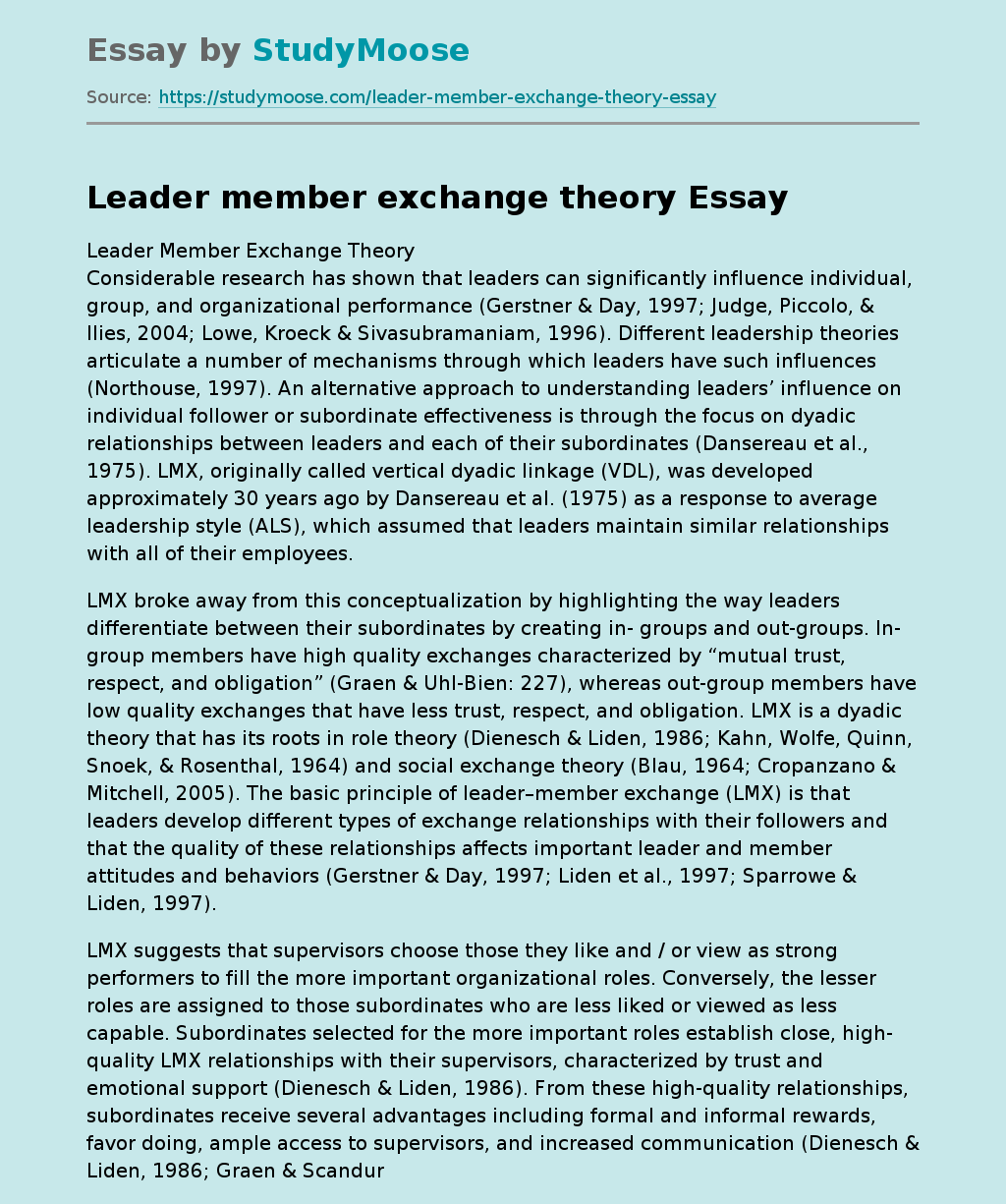