Jeremy Bentham was an English philosopher and political radical. He is highly known and respected today for his moral philosophy, primarily his principle of utilitarianism. Utilitarianism evaluates actions based upon their consequences. Bentham is most famously known for his pursuit of motivation and value. Bentham was a strong believer in individual and economic freedom, the separation of church and state, freedom of expression, equal rights for women, the right to divorce and the decriminalizing of homosexual acts.

Don't use plagiarized sources. Get your custom essay on
“ Jeremy Bentham and Immanuel Kant ”
Get custom paper
NEW! smart matching with writer

Bentham was born in Houndsditch, London in 1748 to a very wealthy family who supported the Tory party. He was very intelligent and bright minded. When he was a toddler he was found behind his father’s desk reading the history of England and at age three he began studying Latin. He obtained his masters degree from Oxford College in 1766, where there after he trained as a lawyer but never practiced.

Instead, Bentham decided to write about the law. One of Bentham’s major influences was Joseph Priestley. Bentham read Priestley’s work and had quickly changed his mind about the conservative political views that he had grown up in. One statement in particular from The First Principles of Government and the Nature of Political, Civil and Religious Liberty had a major impact on Bentham; “The good and happiness of the members, that is the majority of the members of the state, is the great standard by which every thing relating to that state must finally be determined.

Bentham was also heavily influenced by the philosopher David Hume. In 1798 Bentham wrote Principles of International Law where he argued that universal peace could only be obtained by first achieving European Unity. He hoped that some for of European Parliament would be able to enforce the liberty of the press, free trade, the abandonment of all colonies and a reduction in the money being spent on armaments. One of Bentham’s most famous works was Constitutional Code in 1830. Here Bentham shares many of his ideas and beliefs on political democracy.

Bentham argues that political reform should be dictated by the principal that the new system will promote the happiness of the majority of the people affected by it. He also argues about universal suffrage, annual parliaments and vote by ballot. Bentham believed that there should be no king, no House of Lords and no established church. In Constitutional Code Bentham also includes his view that men and women should be able to vote. Bentham also addressed the problem of how government should be organized and suggests the continual inspection of the work of politicians and government officials.

Perhaps Bentham’s most famously noted for his work with Utilitarianism and is noted as the founder of modern utilitarianism. His work can be found in his book The Principles of Morals and Legislation. Utilitarianism is defined as “a theory in normative ethics holding that the proper course of action is the one that maximizes utility, specifically defined as maximizing happiness and reducing suffering. ” Bentham examined the concept of punishment and when it should be used as far as whether a punishment will create more pleasure or pain for society.

He believed that the legislation of a society is vital to maintain the maximum pleasure and the minimum degree of pain for the greatest amount of people. Jeremy Bentham passed away on June 6th 1832 at the age of 84. Immanuel Kant Immanuel Kant was born, lived and passed away in his home town of Konigsberg. He lived from 1724 to 1804. He studied at the local university and later returned to tutor and lecture students. It wasn’t until he met an English merchant by the name of Joseph Green that Kant learned of David Hume and began to develop his ideas of morals and values.

Kant’s Critique of Pure Reason (1781) is believed to many to be his greatest work. Kant’s was known mainly, however, for his moral code The Categorical Imperative. Immanuel Kant was a follower of Deontology, or duty ethics. Deontology is a theory holding that decisions should be made solely or primarily by considering one’s duties and the rights of others. One of the most important implications of deontology is that a person’s behaviour can be wrong even if it results in the best possible outcome. And, an act can be right even if it results in a bad outcome.

In contrast to consequentialism, a philosophy infamous for its claim that the ends justify the means, deontology insists that how people accomplish their goals is usually, or always, more important than what people accomplish. Kant’s moral philosophy is based on the categorical imperative, good will, and duty. According to the categorical imperative, it is an absolute necessity, a command that humans should accord with universalizable maxims to treat people as ends in themselves and exercise their will without any concerns about the consequences or conditions of their actions.

This concept can also be expressed in systematic terms by the two following formulations. The first form of the categorical imperative prescribes that we must act only according to that maxim whereby we can at the same time will that it should become a universal law. The second one states that we ought to treat humanity, whether in our own person or in the person of another, always at the same time as an end and never simply as a means. In order to obey the categorical imperative, people have to act on a maxim that can be universalized.

For instance, Kant argues that a lying promise is bad since it does not pass the universality test. Whenever a person makes a promise knowing that he will have to break it, he violates the first formulation of the categorical imperative. He intends to make use of another man merely as a means to an end which the latter does not likewise hold. In other words, Kant does not believe that lying promises are bad due to the fact that they generate bad consequences but because they result in a practical contradiction. According to him, people can’t lie since they can’t act for the results.

Considering the second formulation of the categorical imperative, we have the need to have others working for us limited to some morality principles without treating them merely as a means. Kant believes that even though we have the ability to create our own ends, we can’t use people for our own devise. If we interfere with others to pursue their end while pursuing our own end, we violate their autonomy. We can’t have double standards for ourselves and for others. It is morally obligatory for us to respect others since people are rational agents.

We must respect everyone in the exact same way and treat them as autonomous. As rational beings, humans are systematically united through common laws within the Kingdom of Ends. We belong to this kingdom as a member when we legislate in it universal laws while also being ourselves subject to these laws. According to Kant, everyone, no matter who they are, should be both the legislator and the follower of moral laws. Overall, Kant’s theory emphasizes that no one is an exception to moral laws, that people must act on strongly held beliefs or duties that are not in their own interest, and that we should never use people. 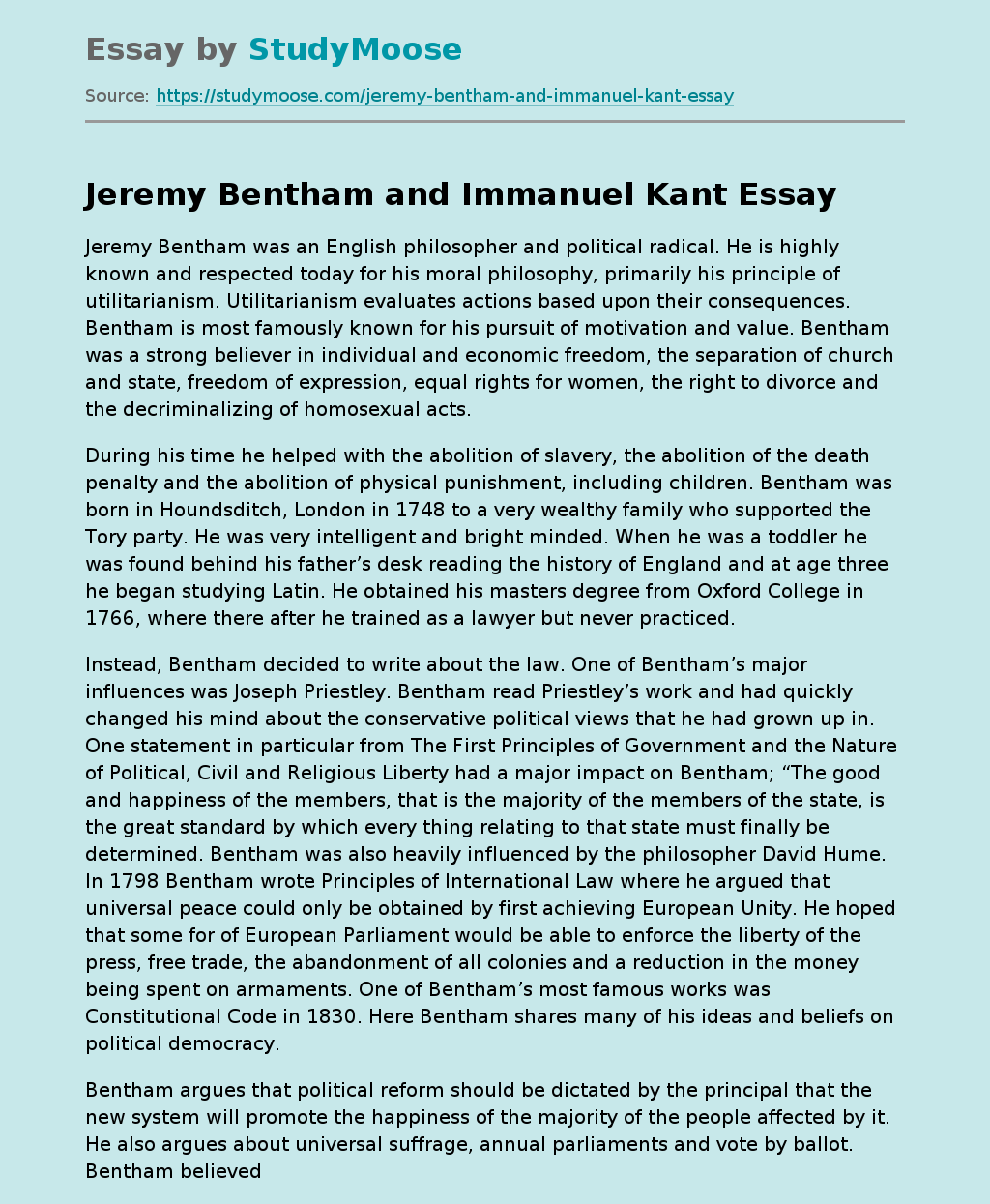