Courageous and full of determination, Jake Garson in one of the short stories I’m Still Here, written by Veronica Ross, shows the set of characteristics that many Canadians regard as expressing their unique place and role in the world. He tried to fight and stand up for his own rights against the government through his act of bravery. By doing this, he had influenced many people in his hometown that faced the same situation as Jake; however, they did not show the same kind of courage that Jake showed.

Don't use plagiarized sources. Get your custom essay on
“ “I’m Still Here” by Veronica Ross ”
Get custom paper
NEW! smart matching with writer

Readers who like to reevaluate and rethink what they are reading are recommended to read short stories such as I’m Still Here. It is one of the stories that teach us the moral lessons of standing up for yourself without anger or violence and to have a positive attitude at all times.

This is one of the effects it had made to the short story. Some other effects also include a slow beginning introduction with an unpredictable ending.

The author also does an excellent job of capturing the reader’s interest through plots twists, characters, theme, symbolism and much more, which made an effective short story. Although the use of vulgar language had made an unattractive impression, it showed the characteristics and emotions of the character inside the story, which made it more alive for the readers to read. Kezia, the main character from the short story The Wedding Gift, written by Thomas Raddall had a similar situation like Jake.

Both of the short stories teaches us the moral lessons of standing up for yourself.

Courage and bravery was something Jake had successfully shown in the short story. “Glad to see you’re standing up for your rights. We had the same thing happen to us, but we didn’t have your courage. Good luck” (Ross 201). In the story, the government wanted to take away his land with fair compensation being paid. However, Jake was not caring about the money; he was determined to stay because he was born on that land and it had been in the family a hundred and eighty years. His roots are there so losing it would be like losing a part of him. Although it looked like a foolish act to do, it had influenced many people in his hometown.

All the children came and said the same thing, “that Jacob Garson was a hero, a man brave enough to stand up for his freedom. And that they were behind him” (Ross 201). However, not all people supported him. They were others who thought he was being selfish and tried to threaten him. “We’ll burn your house down, you fool” (Ross 199). “Your land could be enjoyed by all, you selfish son of a bitch” (Ross 202). Nevertheless, those people did not make a successful interference toward him. With this bravery attitude and act of determination, it had made an effective short story that teaches readers a great moral lesson. 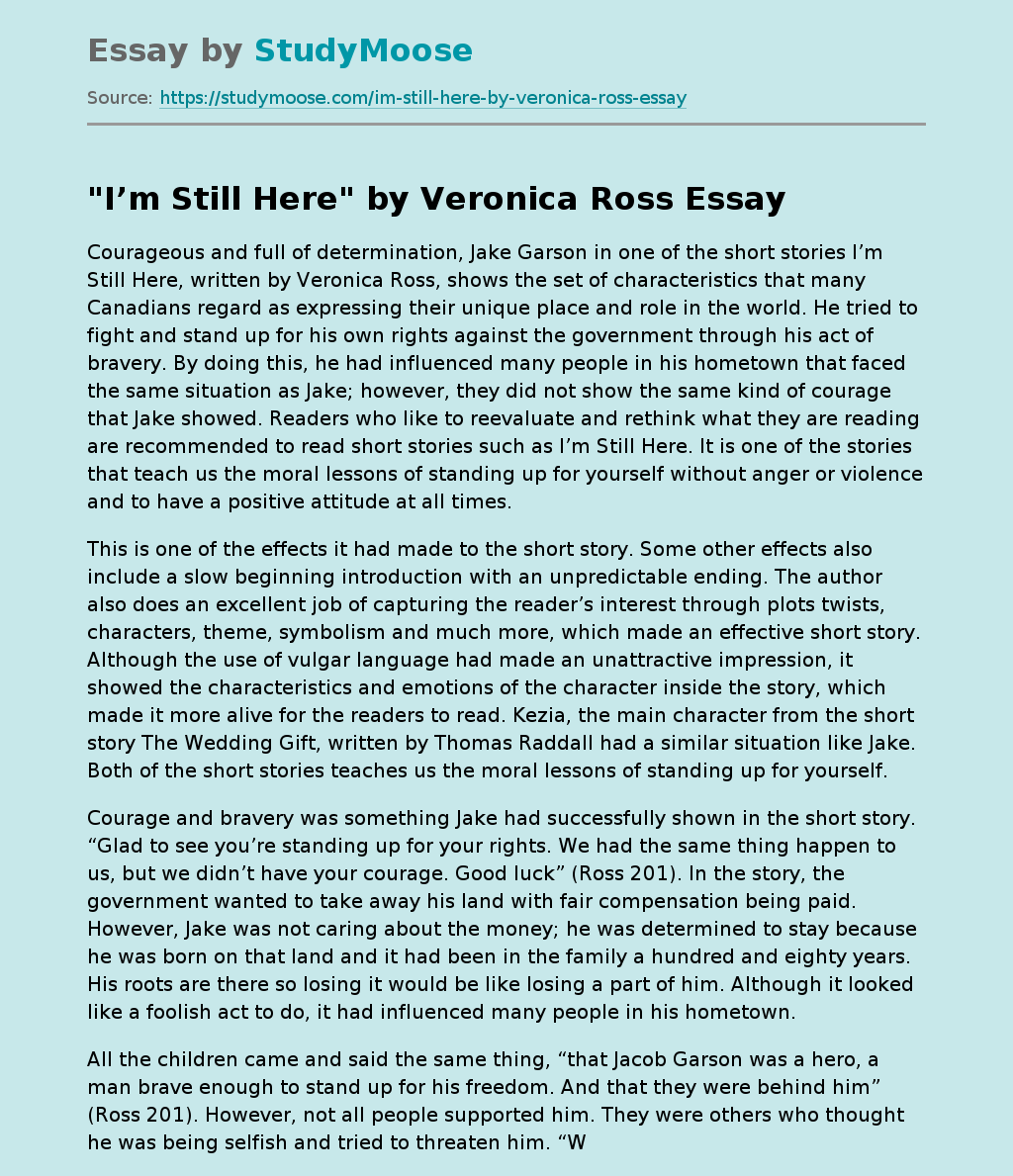