A Comparison of the Acts of Courage, Bravery and Heroism Between the Characters of Julie, Maddie and Anna Engel in Elizabeth Wein's Code Name Verity

Being a book about the Second World War, it is only fitting that the story in Code Name Verity is characterized with acts of courage, bravery and heroism. Many characters in the book have been the most prolific in creating the accounts of courage. This paper will however focus on three of these characters; Julie, Maddie and. The following is a comparison of characters in Code Name Verity with reference to bravery so as to establish the most courageous among them.

Don't use plagiarized sources. Get your custom essay on
“ A Comparison of the Acts of Courage, Bravery and Heroism Between the Characters of Julie, Maddie and Anna Engel in Elizabeth Wein’s Code Name Verity ”
Get custom paper
NEW! smart matching with writer

Lady Julia Lindsey is undoubtedly the most courageous in the story. She is the main protagonist and comes from an aristocratic family. The fact that she is born into a rich family and yet accepts to put herself in danger by serving in England’s Secret Service is proof of a lady who is not afraid to follow her desire (Wein 43). She in fact openly says how she has love for espionage, dangerous as it may be and even glorifies it calling it ‘the great game’.

This is proven by her fascination with adrenaline activities such as jumping from airplanes. While loving the game might be considered a prerogative for all spies in the business, but in comparison with other spies, Maddie, her best friend, says that Julie loved it more than most. Although she might misdirect readers with her opening remark claiming that she is a coward, if Julie’s action are anything to go by, then one realizes that she is indeed courageous; enough to even doubt herself.

Moreover, Julia has a feisty attitude toward her tormentors. This could be misconstrued as stupidity in her part since being cutting towards a tormentor may result in increased torture. For example, she tells von Linden, the cruel Nazi commander that by being absent on the day she is being tortured, the commander had missed ‘a rather good show’ (Wein 49). She even bit a policeman on her arrest and is constantly verbally foul when in the Nazi prison. Moreover, Julie was not as shaken by the ordeal of being on death row, since she even flirted with some of her German captors. Such a mindset in the face of danger can only be pulled off by a brave person. Julia asserts that everything about her is defiant; that her name itself is an act of defiance against Hitler, the most feared man during the war. Julie’s bravery is even attested by her best friend, Maddie, who calls her daft, generous and brave.

To assert Julia as the bravest in the book, a comparison with Maddie is warranted since she too braved some of the challenges that Julie did. While Julie had a quick and seamless admission into the espionage agency, Maddie had to work her way up and prove her worthiness. Thereby, it can be argued that Maddie’s approach to life was more somber and levelheaded when compared to Julie who was wild. It does not however warrant the conclusion that Maddie was timid. She in fact performed some courageous acts too. For example, in April 1943, Maddie commandeers a plane without authorization and flies it even when she wasn’t cleared as a self-sufficient pilot. In doing so she challenges that chain of command in the military which is a bold move on anyone’s part, especially that of a woman, seeing that women were only starting to be accepted in professional capacities in the military (Wein 32). Six months later, she uses a damaged plane to fly Julie to an intelligence gathering mission when she learns that Julie’s designated pilot had got into an accident. Before the plane fails however, she lets Julie to parachute out, remaining alone to control the incipient crash. This was both a brave act and self-sacrifice. In December 1943, Maddie is put into the impossible position of killing for mercy. While the ordeal is difficult even for people who are unacquainted, Maddie braves performing the act on her best friend. She had been heading a mission to rescue Julie from the Gestapo but the plan backfired. Unfortunately, Julie is wounded in the cross-fire and begs Maddie to kill her lest she gets more torture from the Gestapo. Even in the fast paced setting, Maddie maintains a cool head and trusts that Julie was aware of what she was asking of her friend and in spite of the love she felt for her, Maddie shot Julie.

While a comparison between Maddie and Julie on accounts of courage may seem unfair, seeing that Julie is portrayed as utterly fearless, comparing both of them to Fraulein Engel helps look at Julie from another perspective. Anna Engel is yet another woman playing a role in the war. For her to have achieved as much authority as she had, she must have struggled as bravely as the other two women (Wein 120). Engel is initially introduced to the audience with hints of being villainous as Julie first fakes her account. It is later revealed that Engel is in league with Julie and that she had been working to keep the charade around other Gestapo officers that she was torturing and interrogating Julie. In doing so, it brings to light a different type of heroine, who works behind the veil to ensure that Julie is saved and to destroy the villainous Nazi prison. Anna thus shows the audience her courage by secretly defying von Linden’s efforts. She moreover accepts the blatant hostility shown by Julie towards her as Julie calls her a slave officer. In addition to that, she buries her contempt for the Gestapo by masquerading as one of them, tarnishing her own name and enduring ill-treatment so that in the end of it all she could bring down the Gestapo. Such silent resilience is a mark of courage.

Julie emerges as the bravest since the type of courage that she embodies is unafraid of death itself. She constantly flirts with danger and seeks adrenaline in espionage activities. Maddie and Anna Engel’s roles in promoting heroism are not to be belittled however (Wein 112). This is since the nature of the courage that they espouse is of a silent calculating kind. While Maddie will occasionally rise up to the occasion by being defiant and heroic just as Julie is, Engel silently braves a bad reputation and enduring self-degrading conditions at the Gestapo headquarters if only to destroy them. Julie’s courage however transcends the two other characters’ since just like Maddie, she was calculating and analytical while like Engel, she could also tarnish her identity to fulfill her mission. In the end, what set her apart from the rest was that she was unafraid even in the face of certain death to stay true to herself.

A Comparison of the Acts of Courage, Bravery and Heroism Between the Characters of Julie, Maddie and Anna Engel in Elizabeth Wein's Code Name Verity. (2019, Aug 19). Retrieved from https://studymoose.com/a-comparison-of-the-acts-of-courage-bravery-and-heroism-between-the-characters-of-julie-maddie-and-anna-engel-in-elizabeth-weins-code-name-verity-essay 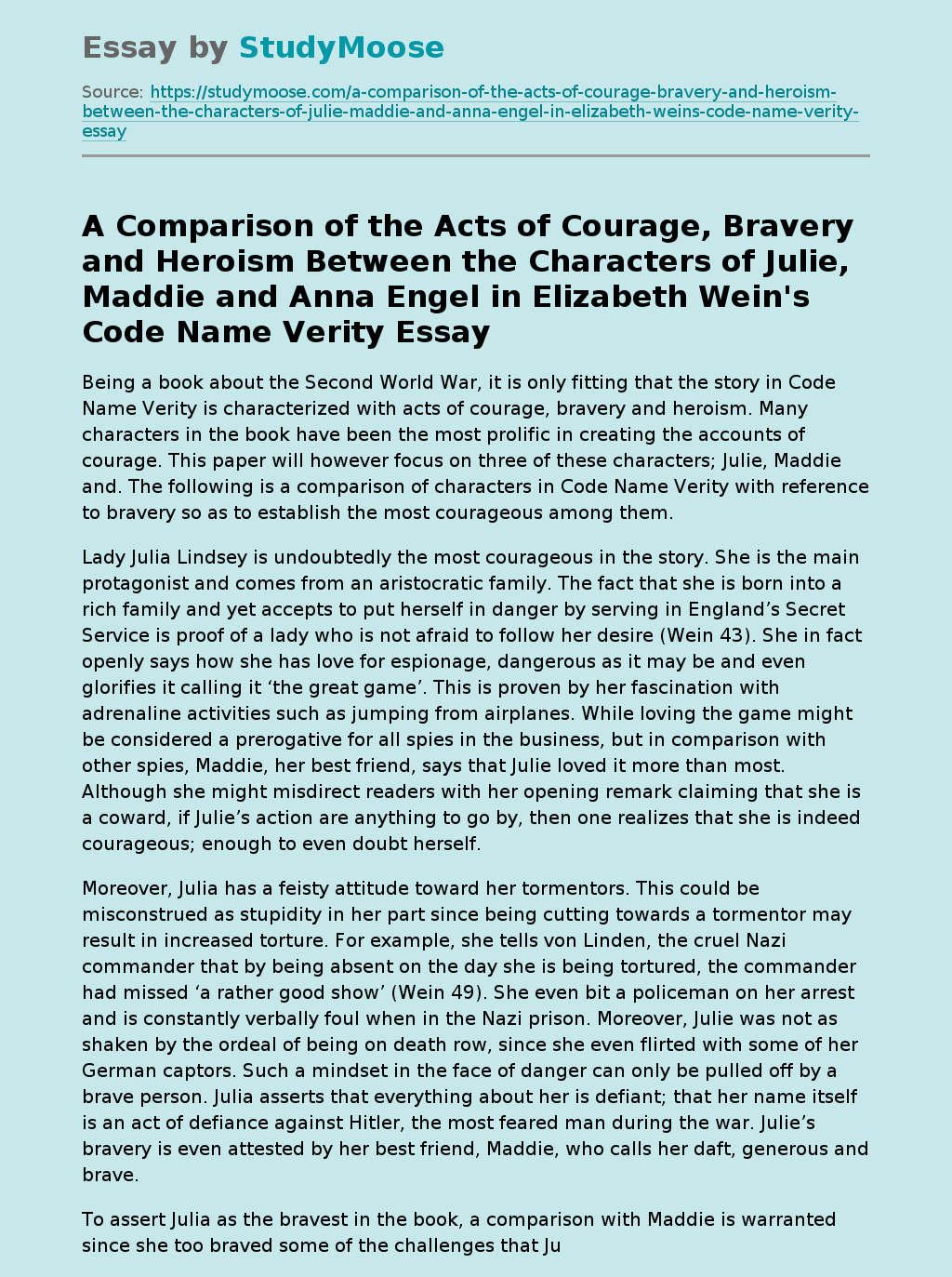