Many works of contemporary literature discuss ideas and topics which are seen in the world around us today. These themes are either directly demonstrated or implied. Two works as such are “The Visit” by Friedrich Durrenmatt and “A Chronicle of a Death Foretold” by Gabriel Garcia Marquez. The issues raised in these two books are justice, communication, tradition, and moral values. Tradition is the ongoing obligation to commit to something, which is an act that has existed for many years.

More often than not, tradition helps keep a community in one piece, much like laws do.

Don't use plagiarized sources. Get your custom essay on
“ Ideas And Issues In “The Visit” And “A Chronicle Of A Death Foretold” ”
Get custom paper
NEW! smart matching with writer

In other cases, tradition obligates people and makes them do things they normally wouldn’t do. In “A Chronicle of a Death Foretold”, tradition is one of the forces that drives the Vicario twins to kill Santiago Nasar and therefore clean their family’s name. However, the Vicario brothers try to escape tradition. They had a debt which they greatly doubted and criticized. They know what the whole town expects them to do.

But on the other side, their everyday life and friendship with Santiago Nasar, their victim, fills them with haste to fulfill tradition and do their pre-said duty. In “The Visit”, it’s tradition in the first place that brings the much anticipated lady Zachanassian to Guellen. So, in other words, tradition kills Ill as well as Santiago Nasar. Intertwined with the complications of tradition are the moral values behind any clearly human act. The only reason tradition has always been so difficult to adhere to is because of the moral issues behind the acts that tradition is composed of.

This is seen in both pieces. In “A Chronicle of a Death Foretold”, the Vicario brothers are in a state of great misfortune not only because of the shame inflicted upon the Vicario family name but also because of the deed the have to carry out. However they also want their duty to be done. In an attempt to combine both, the twins unsuccessfully try to be caught whilst looking for Santiago Nasar. In other words, they seek someone to stop them by telling the whole town of their intentions. “…

,in reality it seemed that the Vicario brothers had done nothing right with a view to killing Santiago Nasar immediately and without any public spectacle, but had done much more than could be imagined to have someone stop them from killing him, and they had failed” (p. 56). In “The Visit”, the town tries to hold its moral values despite the ironic reward the people and state will get if they do not. Later on in the book, even though Guellen has completely lost its morality and plans on doing Maddamme Zachanassian’s bidding and killing Ill, the townspeople will not admit, whatsoever that they have lost their towns values.

Moreover, they blame Ill for not having any morality and tell him that if he had any values he would use a gun on himself outright. Ill, however denies the Mayor’s suggestion. “Mayor: Pity. You’re missing a chance to redeem yourself and be a more or less decent human being. ” (p. 81) Tradition and the morality behind it are the two most ancient forms of justice. Today, justice is defined by laws and mainly is democratic and clear. But every person has their own form of justice for things, often acquiring either guilt or praise thereafter; or none of the two.

Self-justice is reflexively self-justifying. In “The Chronicle of a Death Foretold”, the Vicario brothers want Justice. However, their morality, as discussed above, does not allow them to justify their family’s shame by killing Santiago Nasar. For the sake of tradition they kill Santiago anyway. Pablo and Pedro Vicario tell everybody they come across that they will kill Santiago Nasar, hoping to get caught.. That way, they would have done their justice and duty as the brothers of Angela Vicario, the violated girl, by attempting to kill Santiago and not actually slaying him.

They do not commit a crime the do not want to commit and which they consider immoral. Also, when Santiago appears to them, the Vicario twins do not face him head on. Instead they give him a chance of escape by remaining of the opposite side of the street and giving him a head-start through their body language. Clara Zachanassian in “The Visit” loses all of her moralities during her childhood as a prostitute and thus ends up defying the right and wrong of justice. Therefore, she goes ahead and offers money for an assassination. The townspeople of Guellen try to force back their moralities but fail to do so.

As a result they take an alternative route to solving their problem. They masquerade the immorality of the crime of murder as justice. What follows is that they kill Ill with their bare hands. For justice and tradition to be enforced, a clear communication line must be drawn. Communication is what leads to the smooth flow of traditions and miscommunication to their collapse of justice. Morality has to do with a person’s ability to communicate to oneself what they truly consider right or wrong; in this case it is contributed to justice and questionable traditions.

Pedro and Pablo Vicario’s failure to alert the whole town of Riochacha of their imminent crime is a result of poor communication. They misinterpreted the ability of the townspeople to pass on information and the rate in which the news would diffuse their way to Santiago Nasar or to the police. However they did not take one aspect of tradition into account: “But most of those who could have done something to prevent the crime and did not consoled themselves with the pretext that affairs of honor are sacred monopolies [according to tradition], giving access only to those who are part of the drama.

” (p. 114). So, according to tradition, most people in town could not tell the authorities, nor anyone for that matter, about the Vicario twins and on top of that they could justify themselves by blaming it on the town’s ethics. “Destiny makes us invisible” (Quote, Gabriel Garcia Marquez, 1928) The town of Guellen, on the other hand, had a level of communication between them far better than any other. They could communicate through the sub-conscious. It is not exactly stated that the Guelleners had actually decided upon killing Ill, so this could be assumed.

They were very well organized and swift in killing Ill, as they were able to put many new products they wanted, more than needed, on account. As is clear, tradition, morality and justice are all connectable aspects which are usually bound together by a means of communication. Situations become elaborate and complications arise. “The Chronicle of a Death Foretold” and “The Visit” are two great examples of a situation that results from the combinations of those four issues.

Ideas And Issues In "The Visit" And "A Chronicle Of A Death Foretold". (2017, Jul 26). Retrieved from http://studymoose.com/ideas-and-issues-in-the-visit-and-a-chronicle-of-a-death-foretold-essay 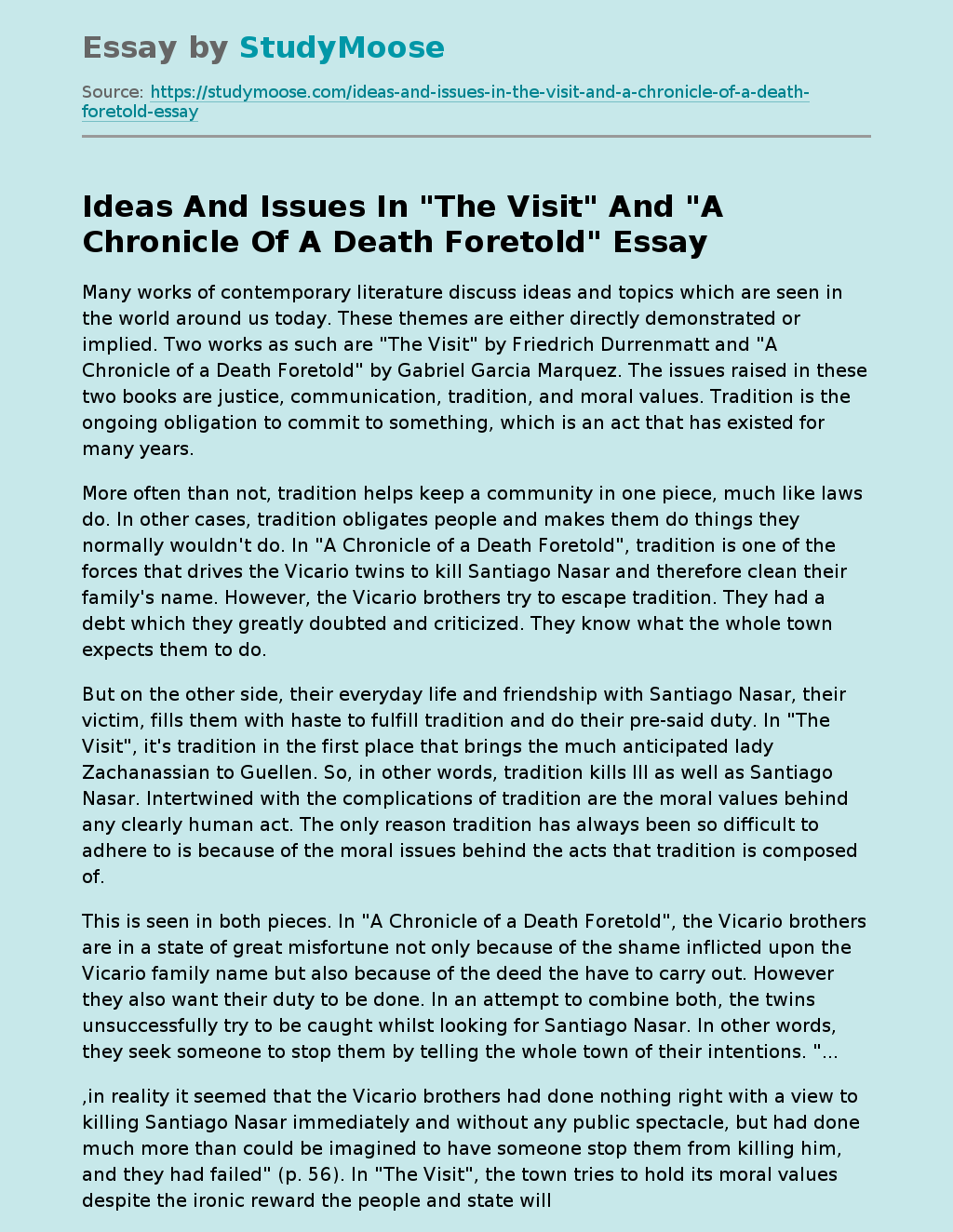