A Visit to a Mosque

I have been a member of the Catholic Church my entire life. Although I have often taken time to reflect on my faith, never once have I made an attempt to explore a religion aside from my own. Recently, I stepped outside of my comfort zone and was fortunate enough to visit a mosque. A mosque is a place of worship for followers of Islam, or one who is Muslim. There are a multitude of services I could have visited to experience a new religion, each with their own identity.

Don't use plagiarized sources. Get your custom essay on
“ A Visit to a Mosque ”
Get custom paper
NEW! smart matching with writer

The reason I ultimately chose to visit a mosque is because Muslims believe all life begins and ends with God, as do I.

However, unlike Catholics, the Islamic religion does not believe Jesus Christ to be the Son of God, nor that he was crucified on the cross. My goal was to gain a better understanding of the beliefs Catholics and Muslims share, how they differ, and why. The experience was refreshing, and I feel as though I left the mosque with solid answers to my questions, and a new outlook on my own faith.

The mosque I visited, called the Mosque Foundation, is located in Bridgeview, Illinois. Although there are mosques shorter in distance from my home, I was told the experience would prove to be better at this particular mosque.

When first walking in, I observed many people gathered in the hallways visiting and conversing with one another. After a short time, the women proceeded down stairs and the men stayed upstairs near the main entrance.

One woman was gracious enough to explain to me the events taking place. Men and women separate to take part in Salat, or prayer. Because the prayer ritual requires putting one’s forehead to the ground, shoes are removed and placed on shelves. Every woman was dressed modestly and wore a veil/scarf covering their hair.

While many people are aware that Muslim women wear this garment on their heads, perhaps what is not known is that this is a religious practice. Many Muslims believe God requires the hair to be covered, as this is stated in the Qu’ran (what Muslims believe to be His final book). I sat on a chair in the back to watch the group of women prays. I noticed there were a handful of girls sitting on chairs in the back as well, away from the group. It was explained to me that Muslim girls who are menstruating are not permitted to participate in prayer, as they are considered to be unclean.

In order to practice traditional salat, one must be in a state of ritual purity. The salat itself is of great importance to Muslims because it is one of the Five Pillars of Islam. The Five Pillars of Islam are five basic acts that are mandatory of Muslims and are considered to be the foundation of Muslim life. The pillars are as follows;

The Muslim faith pray five times a day. The actual salat consists of a series of movements called Rakat. Verses are read aloud by a man over a loudspeaker and the movements are made. The movements, or different parts of the Rakat consist of bowing low with the hands on the knees, lowering oneself to the ground with the forehead and sitting with the feet folded under the body. The actual prayer lasts for less than ten minutes.

When the men and women were finished praying, I had a chance to sit down with the Imam, the one who lead the worship service. The Imam’s name was Khalid. Khalid welcomed me into his office and talked with me for over an hour about Islam. He knew I was of the Catholic faith, thus the majority of our conversation was spent discussing the differences between us. What I gathered from Khalid is that Muslims believe in one God, who created all, and nothing is worthy of worship except Him. Our entire purpose in this life is to serve him.

Muslims do love and venerate Jesus only as a prophet and a messenger, not as the Son of God. They do not feel Jesus was slain on the cross. According to Khalid, Jesus was sent to the people of Israel to revive a spiritual connection with God. This is one very significant way Catholics differ from Muslims, because not only to we feel God gave the world Jesus as His son, but we also worship Jesus and pray to him. Catholics also believe Mary to be the Mother of God. Muslims do believe Mary did indeed give birth to Jesus, though she was a virgin.

The Imam was very adamant about the fact that Muslims do not judge others, nor impose their beliefs upon others. They do however feel that Imam is the right and only way one should live, and those that do not practice the right way will be sent to hell. Those who do not live as God wanted us to, especially those that have been shown the way and turned their back, will be punished. I asked how the Muslim faith feels about those that were never shown the way of God-perhaps a tribe of some sort never connecting with the outside world- how does God treat them? I questioned how could they know if they were never taught?

The answer I received was simple. The Muslims leave those type of questions to God, because only He knows the answer-but they do believe He will treat them fairly. The conversation I had with Khalid had me questioning my own fate. Certainly, I have been shown the way. Even though I am Catholic, I – like the Muslim faith- feel as though our purpose is to serve God. This is what He wants us to do and why he put us here. My visit to the mosque made me realize that it is time to make a choice on how I serve God. I feel giving minimal attention and thanks to God is not good enough.

Khalid opened my eyes when he said “those who turned their backs will be punished. ” I would never turn my back, but I do need to make some small, achievable changes to feel right again with the Lord. I respect how loyal followers of Islam are. Even with the world changing rapidly, the apathetic attitude people have about religion, technology, temptation, etc. , the Muslim faith is stronger than ever, now the largest religion in the world. The reason they devote their lives to Islam is because they are certain they will be rewarded. Perhaps we could all learn something from visiting a mosque once in our lives. 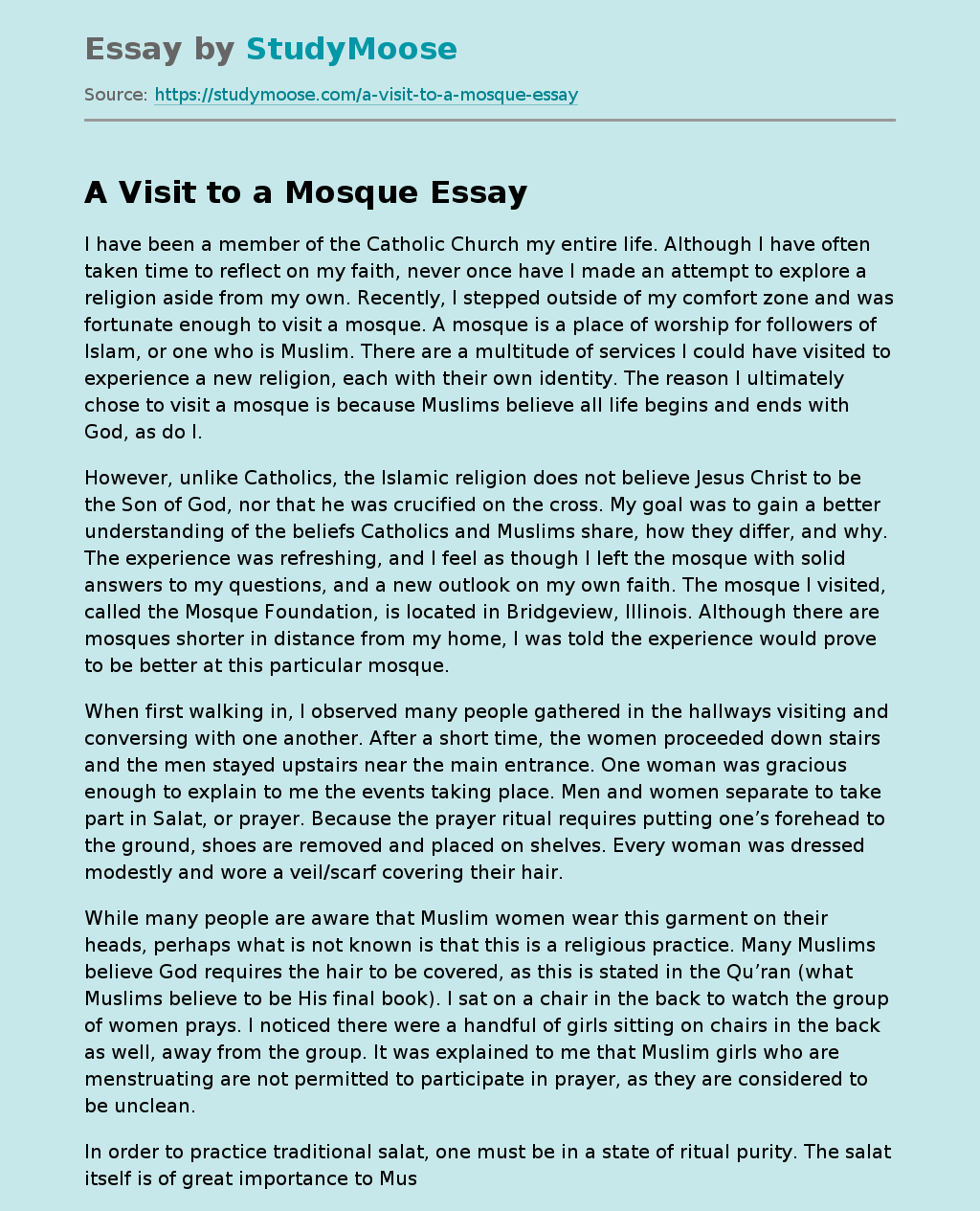