Hunting is considered as a hobby for most people across the world, it is also known as a crime in many countries. The animal instinct in humans was first brought alive through hunting during the Stone Age, when man had not discovered any resources of food other than predation. He hunted like other wild animals, schemed a plan to attract his prey, waited till it approached and then pounced on it with weapons till the animal finally gave in. This practice of hunting has been followed even after millions of years of evolution and is very dominant till today.

Turn in your highest-quality paper
Get a qualified writer to help you with
“ Hunting: Good or Bad? ”
Get high-quality paper
NEW! AI matching with writer

For those who believe in hunting as a hobby, it serves as a great outdoor experience. It can be considered as a good exercise, when you are on a day out! Hunting offers benefits to the hunter as well. There are the benefits of education, by watching and studying the animals, the hunter will in turn learn how they associate among themselves, their patterns for breeding and migration, and their tendencies of behavior.

Therefore, the hunter will not only benefit by this knowledge within his hunt but also an understanding of what animals to harvest when hunting.

Hunting also provides excitement and a chance for a relaxing connection with nature. During a hunt, the hunter is often sitting in silence and connecting with nature. This opportunity allows for the hunter to take in his surrounding and learn the area around him. One of the main pros of hunting is known to be the art of survival which is mastered through this, in case you are stranded in lonely areas.

It gives you knowledge about how and what to hunt.

Hunting is also known to be used for controlling the population of certain animals and men is found to replace some predators which were active in the food chain but are now extinct. The health of the animals and the life cycle that produces from healthy wildlife is important to hunters proving to produce larger, stronger wildlife without damaging their chances of survival. Hunting also brings benefit to humans through the control of the wildlife and the predatory animals that would turn to the neighborhoods when overpopulation occurs.

These dangerous animals are wolves, bears, mountain lions, coyotes, and bobcats. Hunting wildlife keeps disease among wildlife at a lower rate and ensures better survival. Hunting doesn’t mean you have to hunt deer, elephants, and bigger animals, but you can experience the enjoyment by hunting hares, ducks, birds and fishing (also a type of hunting). Today, an economical provision is made by various hunters and sportsmen by donating millions of dollars to improve wildlife and the environment of sanctuaries.

In countries where hunting is legal, they make sure the endangered species are not harmed. According to the U. S. Fish and Wildlife Service, the International Association of Fish and Wildlife Agencies, and other public sources this is where most of the conservation funding is coming from:(Amrhein, 2005) $746 million — Annual amount of money spent by hunters in the United States on licenses and public land access fees alone. Sportsmen’s licensing revenues account for more than half of all funding for state natural resource agencies.

(Amrhein, 2005) $300 million — Additional monies contributed to wildlife conservation every year by the more than 10,000 private hunting-advocate organizations, like the National Wild Turkey Federation, Ducks Unlimited, and the Rocky Mountain Elk Foundation. (Amrhein, 2005) $4. 2 billion — Amount of money sportsmen have contributed to conservation through a 10% federal excise taxes on firearms, ammunition, and gear since the 1937 Pittman-Robertson Act established the tax. Millions of acres of public-use land has been purchased, preserved, and maintained with this money.

(Amrhein, 2005) Hunting for sport of food is a relaxing, exciting and educational experience for hunters of all ages. There are many claims that this type of hunting has no beneficial results and therefore is good. However, there are many who do not understand the true purpose for hunting and therefore do not realized that sport hunting actually good for the environment and people. Education is lacking when an assumption is made stating hunting is only recreational and leaves damage without good.

Hunting: Good or Bad? Anti-Hunting Although it was a crucial part of humans’ survival 100,000 years ago, hunting is now nothing more than a violent form of recreation that the vast majority of hunters do not need for subsistence. Hunting has contributed to the extinction of animal species all over the world. Hunting disrupts migration and hibernation patterns and destroys families. For animals like wolves, who mate for life and live in close-knit family units, hunting can devastate entire communities.

The stress that hunted animals suffer—caused by fear and the inescapable loud noises and other commotion that hunters create—also severely compromises their normal eating habits, making it hard for them to store the fat and energy that they need in order to survive the winter. The delicate balance of ecosystems ensures their own survival—if they are left unaltered. Natural predators help maintain this balance by killing only the sickest and weakest individuals.

Hunters, however, kill any animal whose head they would like to hang over the fireplace—including large, healthy animals that are needed to keep the population strong. Even when unusual natural occurrences cause overpopulation, natural processes work to stabilize the group. Starvation and disease can be tragic, but they are nature’s ways of ensuring that healthy, strong animals survive and maintain the strength level of the rest of their herd or group. Shooting an animal because he or she might starve or become sick is arbitrary and destructive.

Some say hunting causes a lot of deaths and injuries in humans also. Hunting *accidents* destroy property and injure or kill horses, cows, dogs, cats, hikers, and other hunters. In 2007, according to the International Hunter Education Association, there were nineteen deaths and two hundred and twenty injuries attributed to hunting in the United States*and that only includes incidents involving humans. (Internation Hunter Education Association, 2007) It is an ongoing problem, and one that animal rights activists say need to be stopped. 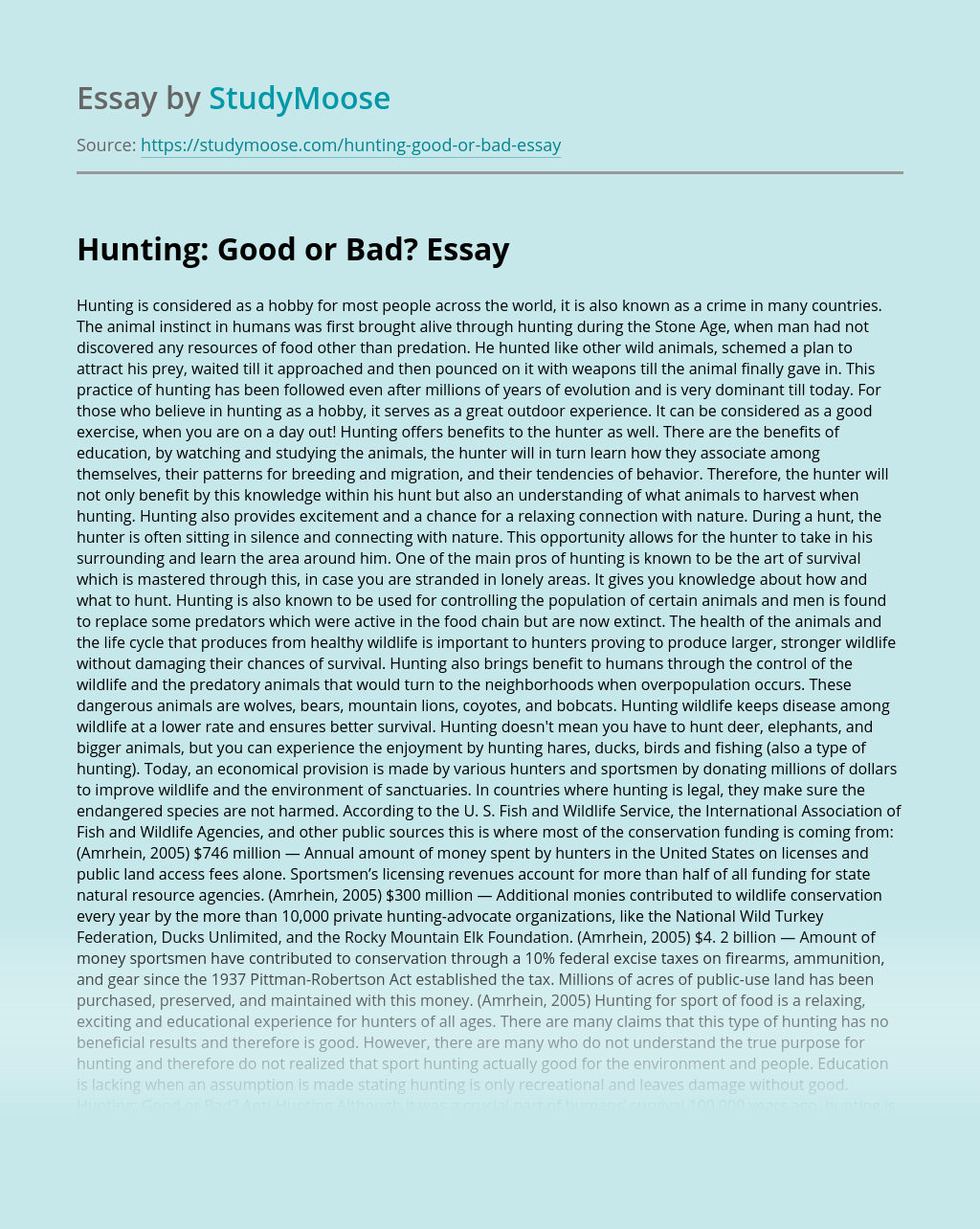 Turn in your highest-quality paper
Get a qualified writer to help you with
“ Hunting: Good or Bad? ”
Get high-quality paper
Helping students since 2015
Stay Safe, Stay Original