Due to the scarcity of wood the two predominant building materials used in ancient Egypt were sun-baked mud bricks and stone, mainly limestone but also sandstone and granite in considerable quantities. From the Old Kingdom onward, stone was generally reserved for tombs and temples, while bricks were used even for royal palaces, fortresses, the walls of temple precincts and towns, and for subsidiary buildings in temple complexes.

Ancient Egyptian houses were made out of mud collected from the Nile river. It was placed in molds and left to dry in the hot sun to harden for use in construction.

Many Egyptian towns have disappeared because they were situated near the cultivated area of the Nile Valley and were flooded as the river bed slowly rose during the millennia, or the mud bricks of which they were built were used by peasants as fertilizer.

Others are inaccessible (unapproachable), new buildings having been erected on ancient ones. Fortunately, the dry, hot climate of Egypt preserved some mud brick structures. Examples include the village Deir al-Madinah, the Middle Kingdom town at Kahun, and the fortresses at Buhen and Mirgissa. Also, many temples and tombs have survived because they were built on high ground unaffected by the Nile flood and were constructed of stone.

Thus, our understanding of ancient Egyptian architecture is based mainly on religious monuments, massive structures characterized by thick, sloping walls with few openings, possibly echoing a method of construction used to obtain stability in mud walls. In a similar manner, the incised and flatly modeled surface adornment (decoration) of the stone buildings may have derived from mud wall ornamentation. Although the use of the arch was developed during the fourth dynasty, all monumental buildings are post and lintel constructions, with flat roofs constructed of huge stone blocks supported by the external walls and the closely spaced columns. Exterior and interior walls, as well as the columns and piers (landing place) were covered with hieroglyphic and pictorial (symbolic) frescoes and carvings painted in brilliant colors.

Many motifs (design) of Egyptian ornamentation are symbolic, such as the scarab or sacred beetle, the solar disk and the vulture. Other common motifs include palm leaves, the papyrus plant, and the buds and flowers of the lotus. Hieroglyphs were inscribed for decorative purposes as well as to record historic events or spells. In addition, these pictorial frescoes and carvings allow us to understand how the Ancient Egyptians lived, statuses, wars that were fought and their beliefs.

This was especially true when exploring the tombs of Ancient Egyptian officials in recent years. Ancient Egyptian temples were aligned with astronomically significant events, such as solstices and equinoxes, requiring precise (accurate) measurements at the moment of the particular event. Measurements at the most significant temples may have been ceremonially undertaken by the Pharaoh himself.

Art Forms: Ancient Egyptian art forms are characterized by regularity and detailed depiction of gods, human beings, heroic battles, and nature, and were intended to provide solace to the deceased in the afterlife. Egyptian art in all forms obeyed one law: the mode of representing Pharaohs, gods, man, nature and the environment. Ancient Egyptian art displays an extraordinarily vivid representation of the Ancient Egyptian’s socioeconomic status and belief systems.

Papyrus: Papyrus is a plant. Papyrus was used by ancient Egyptians for writing and painting. Papyrus texts illustrate all dimensions of ancient Egyptian life and include literary, religious, historical and administrative documents.

Pottery: Ancient Egyptians used steatite (some varieties were called soapstone). Different types of pottery items were deposited in tombs of the dead. Some such pottery items represented interior parts of the body, like the lungs, the liver and smaller intestines, which were removed before embalming (the art and science of temporarily preserving human remains).

Sculpture: The ancient art of Egyptian sculpture evolved to represent the ancient Egyptian gods, Pharaohs, and the kings and queens, in physical form. Very strict conventions were followed while crafting statues: male statues were darker than the female ones; in seated statues, hands were required to be placed on knees and specific rules governed appearance of every Egyptian god.

Egyptian Art Ancient Egyptian art is the painting, sculpture, architecture and other arts produced by the civilization in the lower Nile Valley from 5000 BC to 300 AD. Ancient Egyptian art reached a high level in painting and sculpture, and was both highly stylized and symbolic. Much of the surviving art comes from tombs and monuments and thus there is an emphasis on life after death and the preservation of knowledge of the past. The quality of observation and execution started at a high level and remained near that level throughout the 2nd and 3rd dynasty.

Paintings: Egyptian painting is said to be one of the most unique and mysterious attributes of Egypt. Egyptian painting is not oil-based or fresco-based, it is tempura-based. All Egyptian reliefs were painted on a flat surface. Pigments were mostly mineral, chosen to withstand strong sunlight without fading. The binding medium used in painting remains unclear. After painting, a varnish or resin was usually applied as a protective coating. The paintings were often made with the intent of making a pleasant afterlife for the deceased. Some tomb paintings show activities that the deceased were involved in when they were alive and wished to carry on doing for eternity. Egyptian paintings are painted in such a way to show a profile view and a side view of the animal or person.

Periods in Art: The Ancient Egyptian art style is known as Amarna art. It was characterized by a sense of movement and activity in images. Also, the human body is portrayed differently in Amarna style artwork than Egyptian art on the whole. Faces are still shown exclusively in profile. 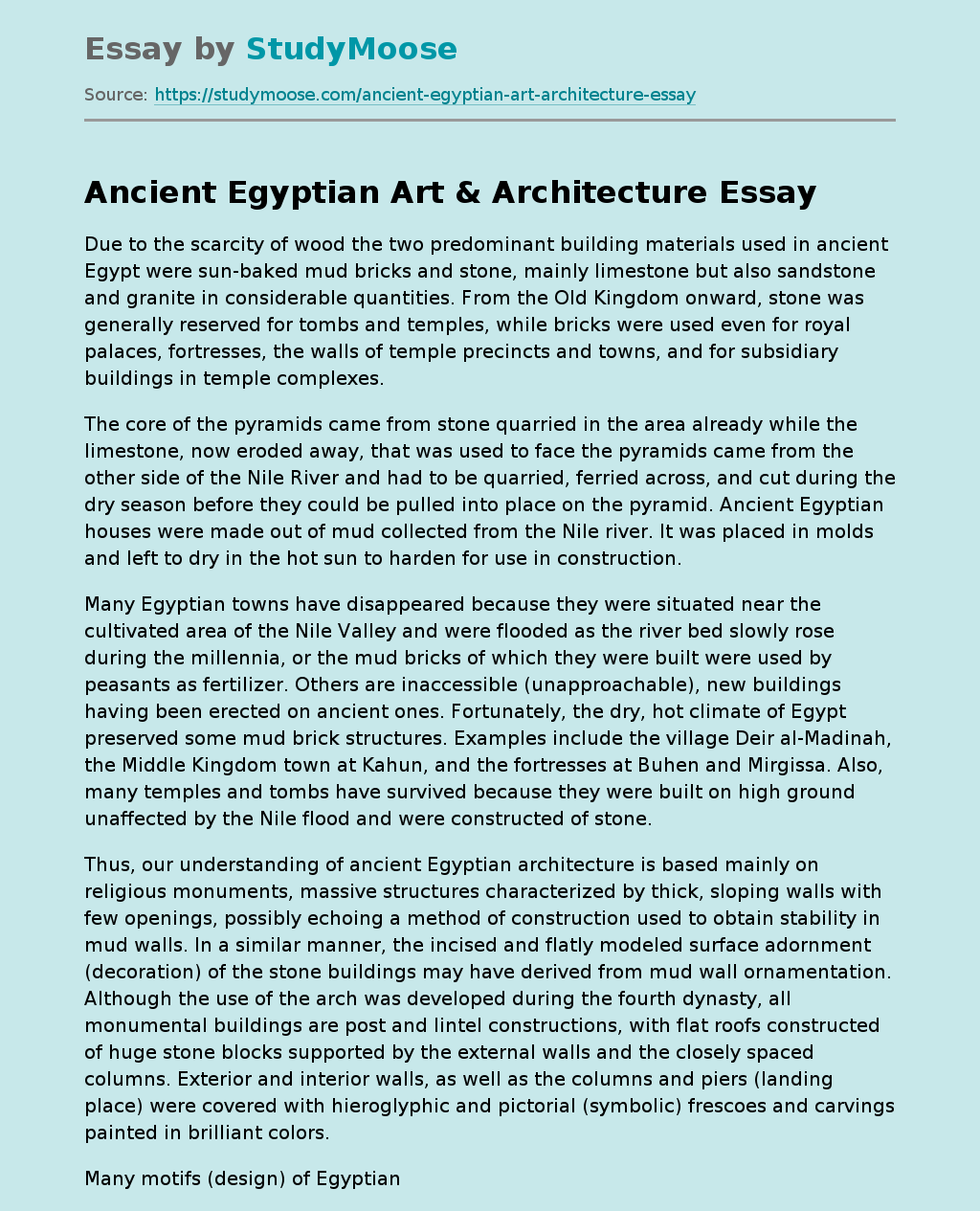