How are women portrayed in Arthur Miller's "The Crucible"?

In Arthur Miller’s “The Crucible”, we are faced with an interesting psychological question: What would happen if the lowest social rank attained power? After all, in the time of the Salem witch trials, women suffered because of their low rank and were expected to submit themselves to men. However, instead of portraying strong female figures, which combat outdated beliefs of a woman’s duty, this play casts women as weak creatures whose only access to power is through dishonesty and manipulation.

Don't use plagiarized sources. Get your custom essay on
“ How are women portrayed in Arthur Miller’s “The Crucible”? ”
Get custom paper
NEW! smart matching with writer

Although Miller’s portrayal of women seems to fit with the prejudices against them of the time, the family-oriented women who remain honest throughout the play possess less power than the unmarried female teenagers who wantonly sentence people to death. Elizabeth Proctor and Rebecca Nurse are two of the least powerful women in The Crucible, while Abigail Williams relishes her newfound power, attained by accusing innocent citizens of practicing witchcraft. Both Elizabeth and Rebecca dutifully serve their families, and the community that ultimately betrays them.

Although Elizabeth never confesses to witchcraft, only the fact that she is pregnant saves her. As the Puritan leaders would never sentence an innocent unborn baby to death, Elizabeth’s life is spared until its birth. Rebecca Nurse, on the other hand, is eventually executed despite the fact that she always presented herself as an upright, God-fearing woman. However, the honest accused were more often than not the ones who lost their lives during both this period and the McCarthy era that the book serves as a commentary on, as they were not willing to confess to a crime they did not commit.

For these reasons, one could argue that Miller agreed with the misogynistic prejudices dominant in the 1692 Salem Witch Trials. Women with power only use it for evil; those suppressed by men remain good and honest.

Abigail doesn’t adhere to Puritan ideals, instead following her selfish desires; she pursues and seduces Proctor, even though this is a sin for which she should be repentant, according to the Puritanical mindset of the times. The teenage girls who comprise the low social rank who come to power are surprisingly one-dimensional, seemingly driven only by their feelings. Since the play can be read as an allegory to the anti-Communist investigations during the McCarthy era, perhaps their characters aren’t fully fleshed out because they only serve the play as “villains”, a parallel to those in the McCarthy era who accused others of being Communists. Miller simply wants to portray them as people who are motivated solely by their own selfish gain. The entire ordeal delivers a misogynistic undertone of a woman’s only interest being a man, as Abigail is willing to sacrifice the lives of innocent people to be with John Proctor.

However, at the same time, it underlines the fact that people during the McCarthy era were only interested in benefitting themselves, and had no regard for the consequences of their actions. The prime example of this is Abigail Williams, a main character in the play. She resents Elizabeth Proctor, convinced she is the only thing keeping her apart from John Proctor, with whom she had a secret affair1. In fact, the events in the play are all set in motion by this hatred, as she persuades Tituba to engage in the practice of witchcraft with her and her friends and, after being discovered and accused, realizes that blaming different people of practicing witchcraft can effectively remove them from society, as this is basically a death sentence. She wields this power to deflect all blame onto Tituba and several of Salem’s other second-class citizens.

2 Once reproached by the community for rumors of her adultery, she now accuses them of a far worse sin: devil-worship. One would think this character would require a rich backstory and complex personality; Abigail’s motivation never seems to grow beyond simple jealousy of Proctor’s wife and a desire for revenge against her, with no remorse for the 19 innocent people whom she sentenced to death. Mary Warren serves as a counterpoint to Abigail. Although she causes a lot of harm and sends people to their deaths as well, she does not do so out of malice, but rather because of her weak and subservient nature.

She is convinced by Abigail to participate in accusing people of practicing witchcraft, but feels guilty for causing their deaths. When Proctor is furious over the arrest of his wife, she agrees to confess to lying about her accusations, however revokes her confession when Abigail accuses Proctor of witchcraft. Mary always sides with the stronger power, too timid to oppose it, thereby both representing the weak-willed people of Salem and symbolizing the McCarthy era.

Ann Putnam isn’t weak, but she is described as weak-minded, introduced as a twisted soul of forty-five, a death-ridden woman, haunted by dreams.3 Multiple stillbirths have most likely caused this mental instability.4 While other people are trying to ascertain the identities of those involved in witchcraft, she frequently suggests names so that others can blame them, and constantly analyzes other people’s actions.5 She also causes panic through a show of fear and anxiety, as well as using false information to influence others.

Lastly, Tituba is part of an even lower social rank than Abigail and her friends, as she is a house slave. Although she admits to practicing witchcraft, her fate is never revealed. This ambiguity over what happens to her emphasizes that whether these girls are witches or not is not actually important.

When analyzing all major female characters, it becomes clear that Miller portrays women as behaving rashly and irrationally when they are in a powerful position. Abigail Williams uses it to eliminate enemies, only to attain the love of a man, while Ann Putnam paranoidly accuses people of witchcraft to explain the deaths of her unborn children. Worst of all is Mary Warren, who is so gutless and unable to think for herself, that she just bends to the strongest will.

How are women portrayed in Arthur Miller's "The Crucible"?. (2016, May 06). Retrieved from https://studymoose.com/how-are-women-portrayed-in-arthur-millers-the-crucible-essay 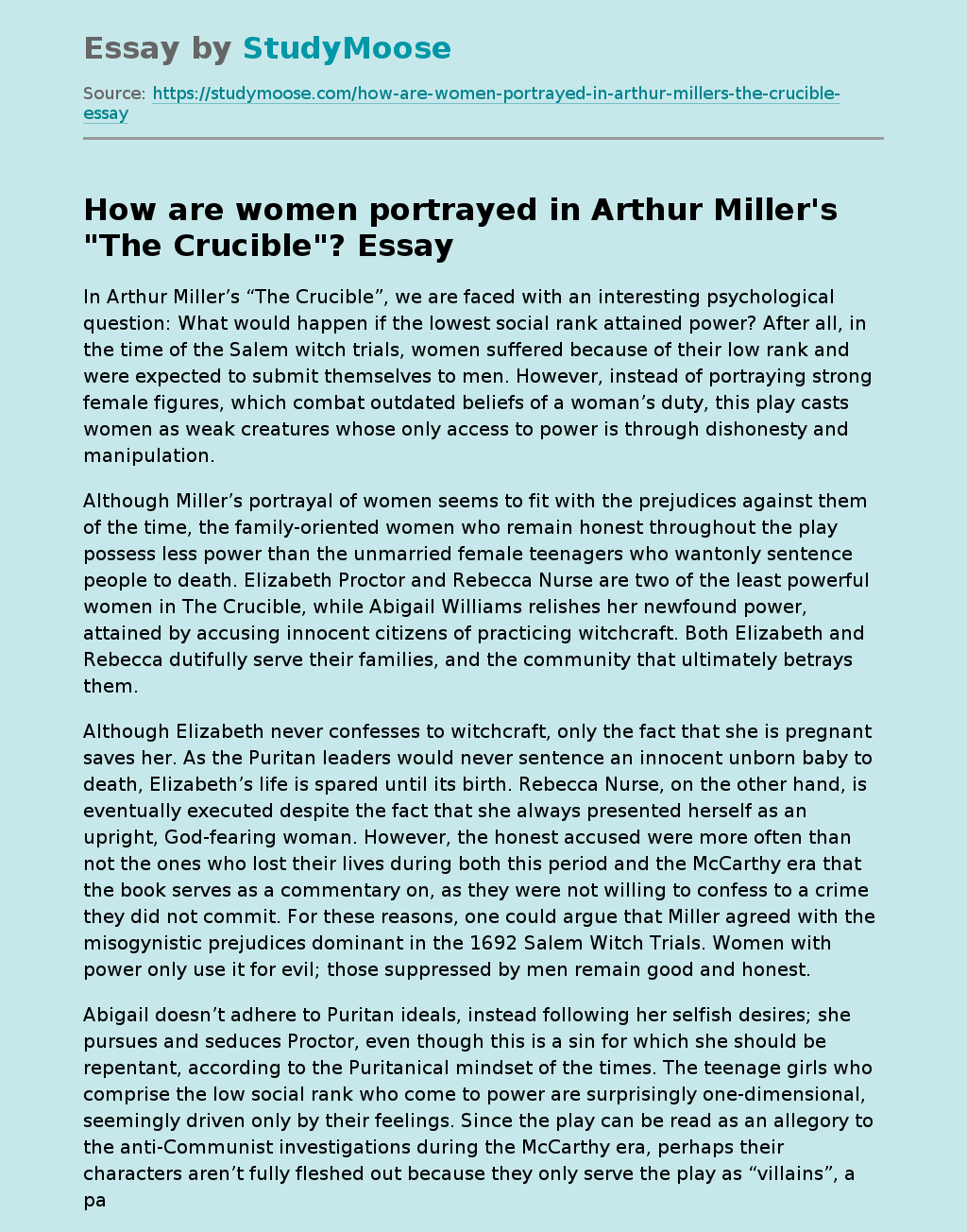