What Impact Did the Colosseum Have on Roman Social Values?

Its purpose was to be a gift to the Roman citizens, a massive breath-taking structure that conveyed the wealth, might and power of Rome, showing exotic, wild animals from all corners of the Roman Empire, showing off the extent of Rome’s conquests of different countries. It displayed the latest of Roman engineering and building techniques and showed re-enactments of famous Roman battles, including sea battles that required it to be flooded with water, which encouraged patriotism.

This was the wonder known as the Colosseum.

Don't use plagiarized sources. Get your custom essay on
“ What Impact Did the Colosseum Have on Roman Social Values? ”
Get custom paper
NEW! smart matching with writer

During festivals, huge crowds would converge on the amphitheatre for a day of games. Up to 50,000 people would watch gladiators fight wild beasts and even other gladiators. The gladiators were prisoners of war, slaves, and even criminals that had been sent through training schools. They often fought with mismatched weapons – the harder the competition, the greater the entertainment. Gladiators could either win freedom, or die trying.

The slaughter was immense – over 5,000 animals could be slain in a single day.

Hunters spread throughout the provinces rounding up lions, tigers, panthers, bulls, hippopotami, rhinoceros’, and even elephants. These brutal spectacles were staged by the Government to divert the menacing hordes of Roman unemployed. Wealthy, intellectual Romans were often shocked by the carnage, but the poor found the entertainment an outlet for passions that might otherwise be turned against the State.

Leading up to the eventual construction of the Colosseum, we look back to events ten years prior. During the reign of the infamous Emperor Nero, the Great Fire of Rome of 64 AD destroyed the Amphitheatrum Neronis and other amphitheatres.

Instead of rebuilding these famous, popular buildings, Nero built himself a fabulous palace with a lake and garden. He erected a colossal statue of himself at this site which became a landmark in the centre of the city of Rome. After the death of Nero, morale and confidence of Roman citizens was at an all-time low.

When Emperor Vespasian came to power in 69 AD, he came up with a plan to gain support of the people and assure the popularity of the Flavian family – he commissioned for the Flavian Amphitheatre to be built. His idea was to demolish the palace of Nero, and therefore symbolizing the end of the horrific reign of Nero, and construct a permanent arena for housing free gladiator games and other entertainment for the amusement of the people. In the years prior to his reign, Vespasian had led a successful campaign against Judea that led to the capture of Jerusalem. He used the proceeds of the victory to build the Flavian Amphitheatre. The name ‘Flavian Amphitheatre’ didn’t catch on. Instead, the Romans called it the ‘Colosseum’, due to the fact that it had been built where the colossal statue of Nero stood, and it is still known as the Colosseum to this day.

The building of the Colosseum started in 73-75AD. The design came from the latest in Roman engineering, architecture and even art, using a team of professional Roman builders, engineers and artists. A limitless workforce that came from the 100,000 prisoners brought back to Rome to be used as slaves from the war in Jerusalem did manual labour that included working in the quarries and lifting and transporting the heavy stones. They moved the huge stones up to 20 miles from the quarry to the building site.

The architects had to design an arena that would hold up to 80,000 people – the biggest in the world. Games could go on for days – the famous inauguration games went for 100 – and there needed to be an effective way to manage the crowds. They came up with eighty arches that could allow crowds to go in and out of the arena quickly easily (arches were a popular Roman design in buildings at that time). The arena could be emptied in less than 10 minutes.

In 79 A.D, nearing the completion of the Colosseum, Emperor Vespasian passed away, leaving his son Titus to become Emperor and complete the building. He held the first inauguration games in 81 A.D which went for 100 days, with over 9,000 animals and 2,000 gladiators getting slaughtered. Titus’ younger brother Domitian, who became Emperor after Titus, added the top tier of the Colosseum and a vast network of rooms, tunnels, cells and passageways underneath the Colosseum which became known as the Hypogeum.

Emperors used the Colosseum to entertain the public with free games. They symbolised prestige and power and increased an emperor’s popularity. Tens of thousands of Romans would be seated in sections assigned to their class – the lower tiers were reserved for the upper class so they could see more action. Above them were the middle class and the top of the arena was for the lower class. Romans could show their violent side through the participation of the games. Being seen at the games was important – the segregation of the seating showed how wealthy and important you were.

Roman social lives revolved around the Colosseum. People would attend the games as an escape from their mundane lives. Games were the talk of the town, with friends talking about their favourite gladiators and the decisions the Emperor had made on who to live, and who to die. Wealthy Romans often bought their own gladiators from wealthy owners of ludi which were gladiator training schools. Depending on if their gladiators won or not, they could brag or be laughed at. Some people even believed that viewing the games would teach you useful lessons in bravery and courage in the face of death, which could be used in war.

Thousands of people were employed at the arena. It became the economic centre of Rome. When Gladiatorial combat was outlawed in 399 A.D, it crushed the Roman economy. So many industries had depended on the money the games would bring and the removal of the importance of the Flavian Amphitheatre helped with the downfall of the Roman Empire.

The Colosseum was a social and economic centre of Ancient Rome. Over 80 emperors watched over the slaughter, with thousands of gladiators falling to their death. The Roman elite were horrified over the violence, yet allowed it because it controlled the poor, who loved to vent their emotions on the chaos that was the games. It was all that was talked about, the highlight of Roman lives, and is still studied and amazed over to this day. This was the wonder known as the Colosseum.

What Impact Did the Colosseum Have on Roman Social Values?. (2016, Sep 20). Retrieved from https://studymoose.com/what-impact-did-the-colosseum-have-on-roman-social-values-essay 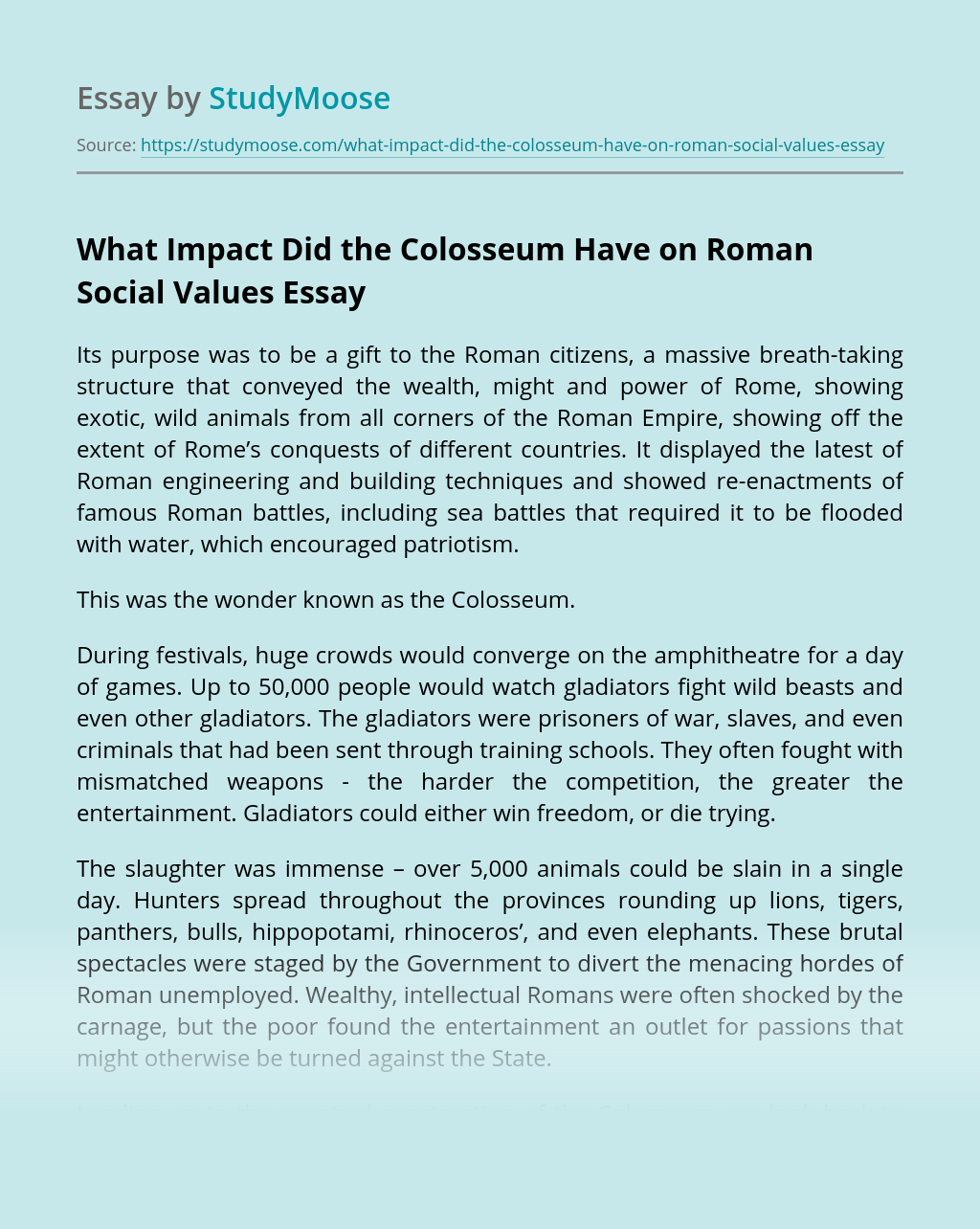