In the essay, “The Joy of Graduating” by Kate Stone Lombardi, describes the traditional high school valedictorian competition with the most prestigious students. The fight for the position of valedictorian has intensified over the years. Danielle Gorman, an elected valedictorian at Moorestown High School in New Jersey, was quoted by Lombardi of the qualifications and standards it took to become valedictorian. The traits Gorman describes common to valedictorians were taking on too much and are unwilling to fail.

I think that Gorman’s assessment is reasonable because many people who strive to become valedictorian take on “more than they can chew” by taking multiple advanced placement classes to extracurricular activities in and outside of school.

Don't use plagiarized sources. Get your custom essay on
“ High School and School Valedictorian Competition ”
Get custom paper
NEW! smart matching with writer

My senior class in high school had very competitive students when it came down to ASB or any student elections. Each student who participated was usually the overachiever; they took multiple AP classes, team captains of the sports’ teams, and public speakers for all school events.

Each student tried to work harder and prove that he or she could attempt to accomplish more than one another.

The students knew that having the title in high school would set them apart from everyone else so that they could have a higher ranking along with using their popularity to their advantage in gaining that title. The idea of getting this title would overwhelm students so much that it would cause more stress on themselves on top of the classes they were already taking. Because of our school’s competitiveness it was difficult to decide one individual for valedictorian.

When it was time to decide who would become the valedictorian, there were two top students whom our class thought would fit the winning spot.

One of the students was a girl named Asal, who was elected senior class president for ASB. The other student was a boy named Henock, who was also elected in ASB but for the school president. Both students had superb grades close to a 5. 0 gpa and they both participated in every on and off campus school event. Each of them had many responsibilities. They each would do their part to help the school community when it came to any projects or tutoring. They set a great example for the student body to look up to. They wounded up the crowds during athletic games and pep rallies with incredible school spirit.

They each would help come up with ideas and themes for dances, along with helping our school clubs with fundraisers and events such as blood drives. They would help put up flyers and make announcements to make the students aware of fundraisers and activities that were constantly going on at school. They would try to help get the whole school more involved by creating fun games and contests going on during lunch to make sure that everyone felt like they were a part of something no matter what grade level they were in.

They had all this pressure coming down on them with all these school activities, along with their school work. They felt the need to accomplish these tasks in order to get into their dream college so this would help them feel a little more secure that they would be accepted. It was incredible that they were able to complete these tasks as full time students and it must have been mentally and physically exhausting. Our student body recognized their hard work and accomplishments so we naturally put them on a pedestal.

The senior class knew that one of these remarkable scholars could be elected valedictorian. I personally encountered experiences with them both on how stressful it was for them to undertake so many duties. I had a couple of classes with each of the presidents, and I started to witness each of them become more stressed out as more and more talk went around the school about who would become the valedictorian. They took the initiative to work ten times harder in class and pushed to receive perfect scores on tests and projects to raise their overall grade, so their percentage would help raise their gpa.

They took on so many extracurricular activities that they had no social life outside of school and struggled to keep up with everything going on. They were pushing themselves to the limit to be the best they could be. This soon turned into a chaotic competition between the two most prestigious students in our senior class. Once graduation day had finally arrived, we were anxious to see whose hard work and commitment had paid off. Everyone was sitting in their assigned seats, clothed in their cap and gown anxiously waiting for the speeches to be presented.

I was looking around the stage to see who was chosen for the class valedictorian, but I couldn’t seem to spot out Henock or Asal anywhere. The principal was the first to give out the welcome speech. He presented a few awards and gave out some words of wisdom to the present senior class. Finally, at the end of his speech he announced that it was time to name our senior class’ valedictorian. Everyone moved around their seats anxiously trying to see who would be honored with this great achievement. The principal then surprised us with a statement none of us expected.

There were to be two valedictorians honored this year because of their outstanding gpa and wide variety of extracurricular activities. Henock and Asal both gained the winning spot that they were each competing for. These two candidates spent their high school career taking various AP courses and being active participants in the school community in order to set themselves apart from the crowd and gained the honorable title of valedictorian. Little did they know that apparently their gpa’s were only a hundredth of a point apart.

The principal explained that Henock actually had the overall higher gpa, but he felt that because of Asal’s hard work and effort she should deserve the same recognition. Needless to say our whole senior class was pretty shocked. We noticed how hard working and competitive these two had gotten to try to be valedictorian and yet both of them received the winning spot. Our school traditionally only had one valedictorian chosen each year so it caught us off guard that there were two valedictorians.

It was ironic that they were both competing so hard against one another when all this hard work they accomplished still got them the credit they deserved. When the speeches were to be given out by our two valedictorians, I was expecting for Henock and Asal to compete for a better speech as well because I thought that since there is traditionally one valedictorian, they would still try to go head to head at who could give a better and more inspiring speech. But to my surprise they each gave out their congratulatory response to one another within their speech.

In Henock’s speech, he acknowledged that Asal was a great inspiration and motivation for him to try harder in his classes and to exceed even his own expectations because that was how he perceived how she was in her classes. He admitted that he looked up to her with great respect and that she definitely deserved to be valedictorian whether or not he was chosen with her. Asal was very grateful and said a few great admiring words about him to show her appreciation towards him and his hard work.

The fact that my high school had two valedictorians did seem to be out of the ordinary for my senior class, but it certainly was deserved to the right people. Danielle Gorman describes the traits of a valedictorian to take one more tasks and harder classes with the drive to not fail.

My classmates Henock and Asal indeed had that drive and it paid off well for the both of them and they each were appreciative that they got to share that number one spot with each other. Although they went head to head with each other trying to achieve the same goal, they were in it to win it and they did. 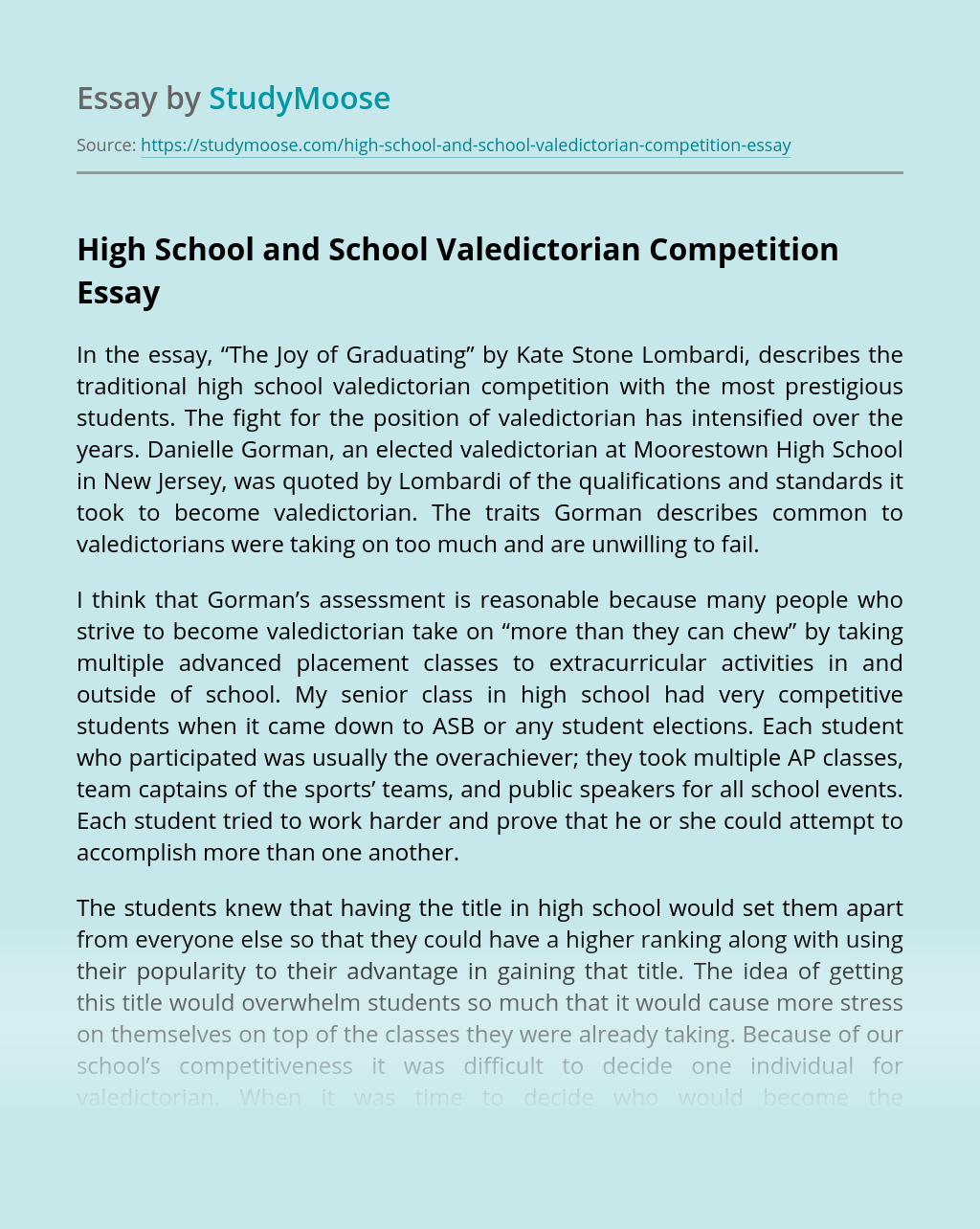