In Hemingway’s novel The Sun Also Rises, I was very impressed by two of the characters Robert Cohn and Count Mippipopolous. Robert Cohn is a shy, inferiority, romantic, childish, unpractical, unsuccessful and unfortunate 34 years Jewish man, and his life is full of uncertainty and frustration. Count Mippipopoplous is a rich, generous, successful and high status business man. He is an old campaigner, and has lots of experience in the war and the life. These two characters live in the same age of turbulence, and they have some of the same friends, whereas they have totally different personalities, attitude and life.

Don't use plagiarized sources. Get your custom essay on
“ The Sun Also Rises ”
Get custom paper
NEW! smart matching with writer

Robert Cohn is an unsuccessful and hapless Jewish young man whether in university or in the society. Firstly, he was the middleweight boxing champion of Princeton, but actually he doesn’t like boxing, and he learn it just because he wants to conquer his inferiority of being a Jew. In chapter I, “He cared nothing for boxing, in fact he disliked it, but he …on being treated as a Jew at Princeton” (11).

He can’t change his original identity, but he wants to be respected from his schoolmates. Being a boxing champion really comforts him although he paid for it a lot. His nose was injured from boxing permanently. But he gets some confidence and satisfaction when he knocks down someone who looks down him. In chapter I, “there was a certain inner comfort … who was snooty to him” (11). From this sentence, we can see he wants to change his first identity of being a Jew and being isolated by the main society.

But unfortunately, no one remembered him after he graduated from the Princeton although he was a middleweight boxing champion of that university. Finally, he gave up boxing with anguish. In chapter I, “he took it out in boxing, and he came out of Princeton with painful self-consciousness and the flattened nose” (12).Obviously, he is an unsuccessfully student when he was in the university. Secondly, Robert Cohn is an unsuccessful man in his marriage.

His doesn’t love his first wife, and he married her just because she was the first girl nice to him. But finally he were divorced by her and lost the money his father left him. In chapter I, “and was married by the first girl…lost most of the fifty thousand dollars his father left him” (12). After his divorce, he went to California and started his new life. This time he was handled by a forceful woman, and she doesn’t allow him to have any female friend. In chapter I, “he had been taken in hand by a lady … and Cohn never had a chance of not being taken in hand” (13). He was scared and controlled by her. His eyes had three years limited to his wife, but he had never been in love in his life, and he wants to change. This change had become reality when his novel got published in New York and had high praise from the publishers. In chapter II, “his going made an awful row I heard, and I think that was where Frances lost him, because several women were nice to him in New York… The publishers had praised his novel pretty highly…”(16). At that time, he realized that he was attractive to women, so he got more confidence and changed his attitude to his girlfriend Frances.

But knowing Brett made him thoroughly abandoned his girlfriend Frances. He loves Brett as mad as a hatter since he first met her, whereas Brett doesn’t love him, and she has lot of wooers. She refused dancing with him, but Cohn doesn’t mind it even he knew she will marry with Mike. He can’t stand anyone to insult her and doesn’t respect her. In chapter II, from Jake and Cohn’s conversation, “‘I do. I shouldn’t wonder if I were in love with her.’… He stood up from the table his face white, and stood there white and angry behind the little plates of hors d’oeuvres.” （46，47）Robert Cohn was infatuated with Brett blindly. That implies his failure of his love in the future. Count Mippipopolous is a rich and high class business man, and he had plenty of war experiences and got several hurts in the war. His belongs to rank and fashion, but he also likes Brett, and wants to obtain Brett’s favor. In chapter IV, “‘… offered me ten thousand collars to go to Biarritz with him…going to drive me around and have breakfast in the Bois’” (40,41).

From these sentences, we can see the Count really likes Brett and is willing to do some favor for Brett. Brett takes some advantage from the Count, because the Count is very rich and generous. He has a limousine and a chauffeur, and he also likes to collect fine wines even those that are expensive. In chapter VII, [Count] said “‘Listen, my dear, I get more value for my money in old brandy than in any other antiquities…I got a houseful’” (68,69). From these sentences we know the Count is a very rich man. He is able to offer Brett material comforts. In chapter VII, [Count] said “I have been in seven wars and four revolutions,… and I have got arrow wounds…” (66, 67). This means Count has lots of life experience especially in the war. After the war, he wants to enjoy the life in order to offset the wounds of his body, so he lives in a luxurious life. To compare with Robert Chon and Count Mippiopolous, they have some similarities and differences.

They lived in the same time and society, and met Brett in Paris after the World War I. They Both liked Brett and aspired after her, whereas they have absolutely different personalities and attitude for lives. Robert Cohn lived in his Utopian dreamed life, and he has an immature attitude for life. After he read W. H. Hudson’s novel “The Purple Land”, he imagined to go to South America to have a romantic experience which is like the scene in the novel. In chapter II, “‘go on and read a book all full of love affairs with the beautiful shiny black princesses.’ ‘I want to go to South America…don’t you ever get the feeling that all your life is going by and …do you realize you’ve lived nearly half the time you have to live already?”. (18, 19)

These sentences showed he is a pessimistic and unpractical dreamer. He always follows his dreams and seeks his ideal life as if he lives in the fiction novel. He loved Brett fanatically although he knows Brett never loved him, but he still pursued his persevering love. That’s why his life full of uncertainty and frustration. At the same time, Count Mippiopolous enjoyed his primrose path in Paris, because he is a practical and enthusiastic successful business man. Although he suffered from the war as others, he didn’t as depressed as others. He knew how to put himself into real life and society. Robert Cohn and Count Mippiopolous are totally different characters in this novel. 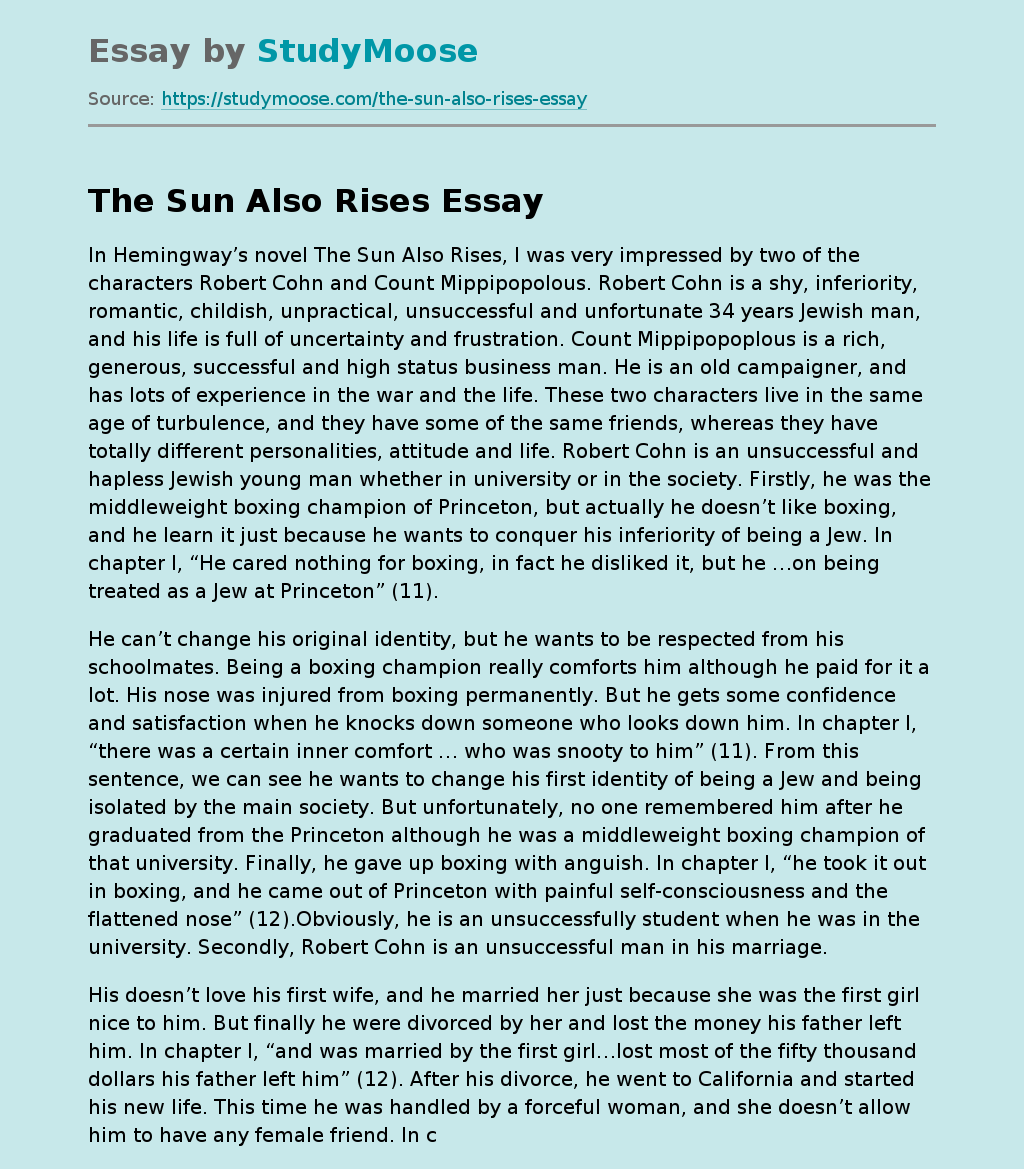