Genya is a weak woman and her subordinate status in the household cannot protect David from his domineering and abusive father. Although little is known about Albert before the novel begins it is clear that he is a bitter character filled with resentment. Albert’s marriage was disrupted when he left for America almost immediately after the wedding. This speedy departure lead Albert to question David’s legitimacy as his true son, building up a resentment for both wife and child.

Don't use plagiarized sources. Get your custom essay on
“ Henry Roth’s Call it Sleep ”
Get custom paper
NEW! smart matching with writer

Once in America, Albert is forced into low paying monotonous jobs available to immigrants.

This pressure ruins Albert and corrupts his relationship with his family, whom he blames. Albert rejects society and the lack of opportunities it presents him. Albert always feels like an outsider, as if everyone is out to get him. David’s father refuses to assimilate in any way to the modern world around him. At home David fears the return of his father from work because he feels “the necessity of continually humbling himself before the relentless, unwinking scrutiny of those eyes, the grey unrelaxing visage (178).

” David an impressionable young boy is without a father figure that he can look up to.

David resents his father for being so bitter, angry, and scary and therefore tries to separate himself from his father and the circumstances that created Albert’s nature. David physically avoids his father when he is home by taking to the streets. Mentally and emotionally David separates himself by looking for answers and trying to seek comfort in the very world that Albert rejects.

David, in realizing that he does not want to grow up angry and bitter like his father turns away from his home life in search of happiness.

By learning more about Genya and Albert it is easier to understand David and some of the decisions he makes throughout the novel. Because David is unhappy in his home life he rejects his parents and their culture. This decision, however, has only left David feeling confused and guilty. David does not truly share a common language with his parents. This makes it extremely hard for him to understand the experiences and struggles felt by the immigrant generation. While at the same time, his parents cannot truly understand the struggle David faces trying to find anywhere to fit in and feel comfortable.

Unlike his parents, David wants to fit in the American culture, as he tries to assimilate himself to his surroundings. Unlike his mother, he doesn’t want to shelter himself from America, it is the only country David knows. And unlike his father, David doesn’t want to resent America and be bitter towards her opportunities and citizens. Twice David lies about being Jewish in an attempt to fit in. Once was when three Irish boys cornered David at the pier; David lied about being a Jew to fit in and feel safe. Another attempt that David makes to break away from his own background and to connect to his adopted American culture is when he meets Leo.

Leo, a Christian, becomes David’s first and only friend in the novel (although he is clearly not a true friend). Leo questions David on being Jewish and then makes fun of its traditions; and David willingly laughs and joins in. It is only later that David feels a slight hint of guilt for turning his back on Judaism. When David realizes that Leo’s parents aren’t home during the day he is jealous and excited. The idea of living without parents gives David an “adventurous” feeling, filled with the excitement of living in “a separate world of their own” (317).

David’s desire to live in a separate world, a world with out parents becomes clear in the context of his relationship to his mother and father. As a child David needs his mother’s close relationship but as he ages he feels the need for freedom, especially as he surpasses his mother in assimilating to America. When David lies about the death of his mother he is staking a claim on his independence. David sees his previous attachment to his mother as interfering with his assimilation into American culture.

David is torn between love and shame; and his search for independence alienates him further from his parent’s immigrant identity. David’s search for a personal identity, independent of his parents, becomes clear upon examining the relationship he has with his parents. The Schearl’s dysfunctional household has a long term and lasting impact on David. The way David approaches life and the different situations he is faced with is a direct result of his rejecting his mother and father’s culture and their refusal to assimilate to the modern American culture that David is growing up in.

David wants to fit in and feel accepted. He doesn’t find this at home and he is forced to search outside of the home, unfortunately this too is unsuccessful. David’s independence and strength to look outside the home for happiness is a result of his inability to connect with his parents on an emotional and meaningful level. The true nature of David’s character is truly made clear when the effects that his familial structure has on him is examined. 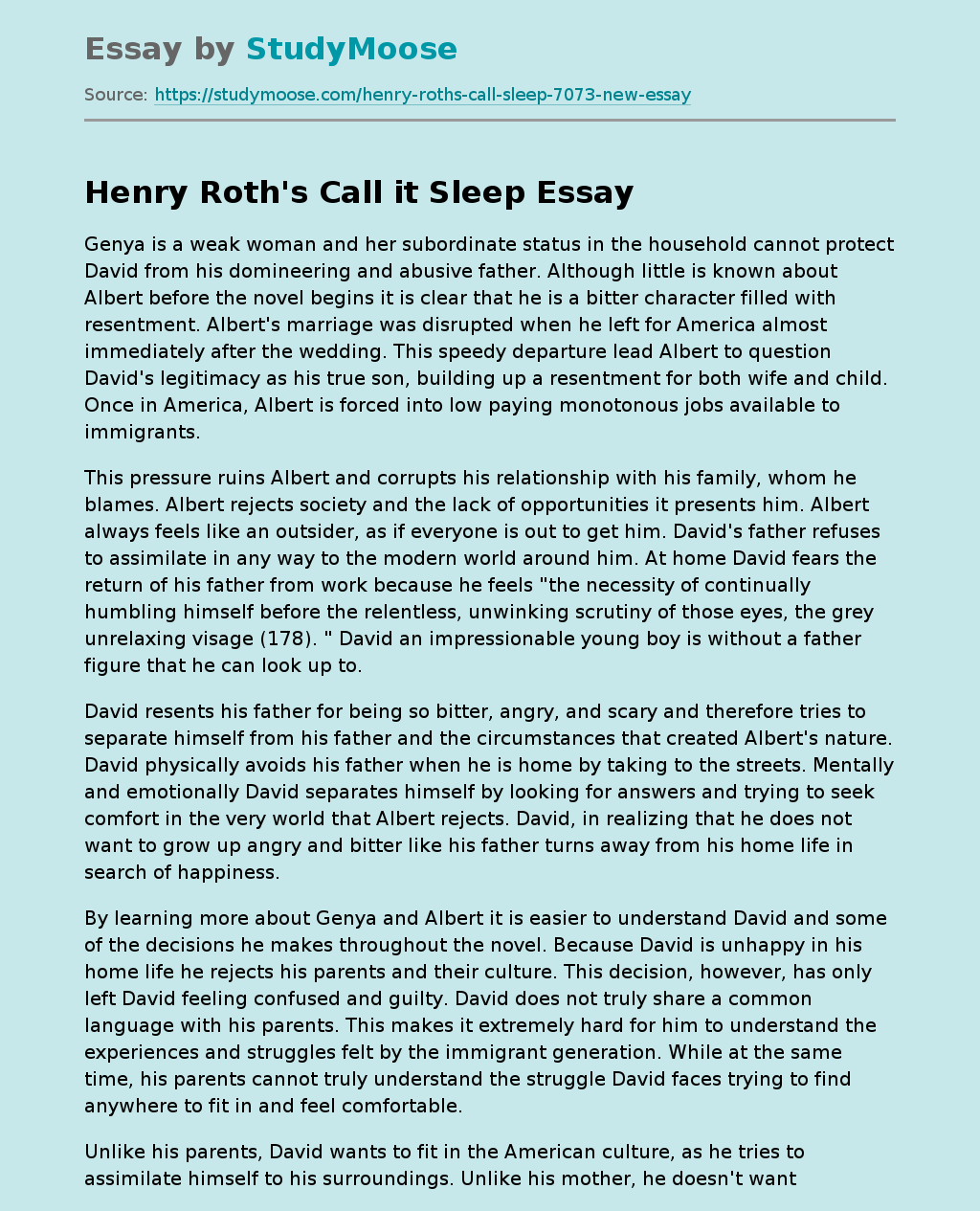