Your decision in life all comes down to you and the path you choose, but just one choice can transform you. Veronica Roth created a strange dystopian world that morally depends on the choices people make in life, because their choices define who they are as people. Her futuristic world is divided into five factions that each represents something different; Abnegation (the selfless), Candor (the honest), Erudite (the intelligent), Amity (the peaceful) and Dauntless (the brave). These five factions were made up to prevent war and bring peace to the world and when they turn sixteen they get the chance to choose to leave their family, to transfer into a new faction or stay with them, but the choice all came down to them.

Don't use plagiarized sources. Get your custom essay on
“ “Divergent” by Veronica Roth ”
Get custom paper
NEW! smart matching with writer

THESIS: In the novel Divergent Veronica Roth examines how the theme of choice leads to bravery, betrayal, and greed.

Firstly the theme of choice leads to bravery, because of Tris selfish choice to leave abnegation and go into dauntless.

Point: Tris bravery in becoming a part of the dauntless is a foil to her own character, because Tris is a person of action, who has courage and is brave, but Beatrice, is the complete opposite. If Tris never made the choice to leave her faction, she would have never learned to be brave enough to overcome her fears and turn from the underdog into a hero. Bravery is represented in this book as being selfish and foolish, because the characters of the dauntless conception of bravery is acting in ridiculous life threatening situations to prove who is most daring to participate.

However, bravery is truly presented as Tris goes through initiation. Not only has her choice to transfer into a different faction show her braveness but it also brought out her inner abnegation and taught her how to be selfless as well: “I believe in ordinary acts of bravery, in the courage that drives one person to stand up for another.” (Roth 207) Analysis:

The significance of this quote is to show how Tris resembles bravery itself. Tris showed people that bravery is not just about being strong and committing acts of ruthlessness; it is about standing up for what you believe is right and being the big person in a situation when no one else is. Her choice to be brave and stand up for other people is what made her the hero in the end. Through bravery Tris was able to channel other traits in her from other factions and create a new her. Because of her willingness to be brave she was able to change herself and the way she thought. She was no longer the old Beatrice of abnegation. She turned in to the brave, courageous, strong, smart and selfless Tris of the dauntless. Any obstacle that came in her way she was able to overcome it and beat it and because of the one choice she made to decide to be brave, it made all the difference. Point 2:

In addition to the above, Tris is a foil to her own character because if she had never joined the dauntless, she would have never been able to be on her way to saving the world: “I feel like someone breathed new air in my lungs. I am not abnegation. I am not dauntless. I am Divergent. And I can’t be controlled. (Roth 442) Analysis:

The significance of this quote is that it shows how much Tris character changed from when she was in Abnegation to now. Being a part of the dauntless gave Tris the strength, the bravery, and the determination to get out there in the midst of it all as the world is crumbling to stand up for her own kind. If she never made the choice to change factions, she would have never had the chance to completely find herself and who she truly is, make the friends she did, and learn how to face her fears. Conclusion:

In conclusion Tris bravery and strength

Therefore Victoria Roth shows that through choice leads bravery, because bravery isn’t just something that happens on its own. It is the choice and the act of bravery that only you can decide to commit to and play a factor on your life. Body Paragraph:

Topic sentence: Secondly the theme of choice leads to betrayal because of Tris and her brother, Caleb, choice to leave their family Point:

Tris and Caleb’s betrayal is an example of pathos. Before Tris and Caleb are chosen to go up and decide on whether they will stay with their old faction or leave, their parents go to congratulate them: “ My father kisses me on the head and clap Caleb on the shoulder grinning. See you soon, he says. Without a trace of doubt” (Roth 40-41) Analysis:

The significance of this quote is that it shows how much hurt and betrayal they cause their father, especially, at the time. The one value that is most important about being a part of abnegation is not being selfish and to think about others. In this case Beatrice and Caleb’s choice to leave their family behind was not an act of selfishness, because they only considered themselves and not how their parents would feel. Thinking that his kids would choose to come home and stay with him and their mother, the father made a comment about how he would see them soon before the choosing ceremony started only to know minutes later that neither of his kids is coming home, and one of his kids (Caleb) are going home with the enemy- the erudite. The one choice they made that they thought would benefit them more in life ended up leading to their dishonour and betrayal of not only their family but their ex- faction. Point 2:

Another act of betrayal was when one of Tris friends, Al, almost killed her out of jealousy, and insecurity. Al was supposed to be someone Tris thought she could depend on to keep her safe, trust, and ensure her that everything would be “okay” when the antagonist of the story and his crew would pick on her; but in the end he betrays her: “The soap smell is familiar. Lemon grass and sage. The same smell around Al’s bunk. A weight drops in my stomach…” “I suggest you rely on your transfer friends to protect you from now on,” he says “I thought I was… I feel Al’s hands against my mouth, and a sob jolts my body forward…” “He wanted you to be the small quiet girl from Abnegation… He hurt you because your strength made him feel week. No other reason” (Roth 278, 295) Analysis:

The significance of this quote is that it shows you how one minute you can trust someone and the next they can easily make the choice to betray and hurt you. Veronica Roth creates pathos for Tris, because Tris knows that she can no longer trust Al again even though they were such good friends. Al’s one choice not only hurt Tris but it also ruined their friendship, and this is one of the ways Veronica Roth shows how your one choice can define who you are as a person. Tris’ strength and ability was what caused Al to be jealous and in the end his jealousy cost him.

Therefore, Veronica Roth created a sense of betrayal through the theme of choice, because it is another way of her showing how a specific choice can not only affect you but the other people around you.

The theme of choice leads to war as the leader of the Erudite chooses to start a war over her own selfish reason. The factions were divided into five to prevent war and destruction from occurring in the world; but because the people of abnegation are divergent she chooses to take away many people physical and mental control to start a war and take them down: The theme of choice leads to greed because those who have power live in fear of loosing it. 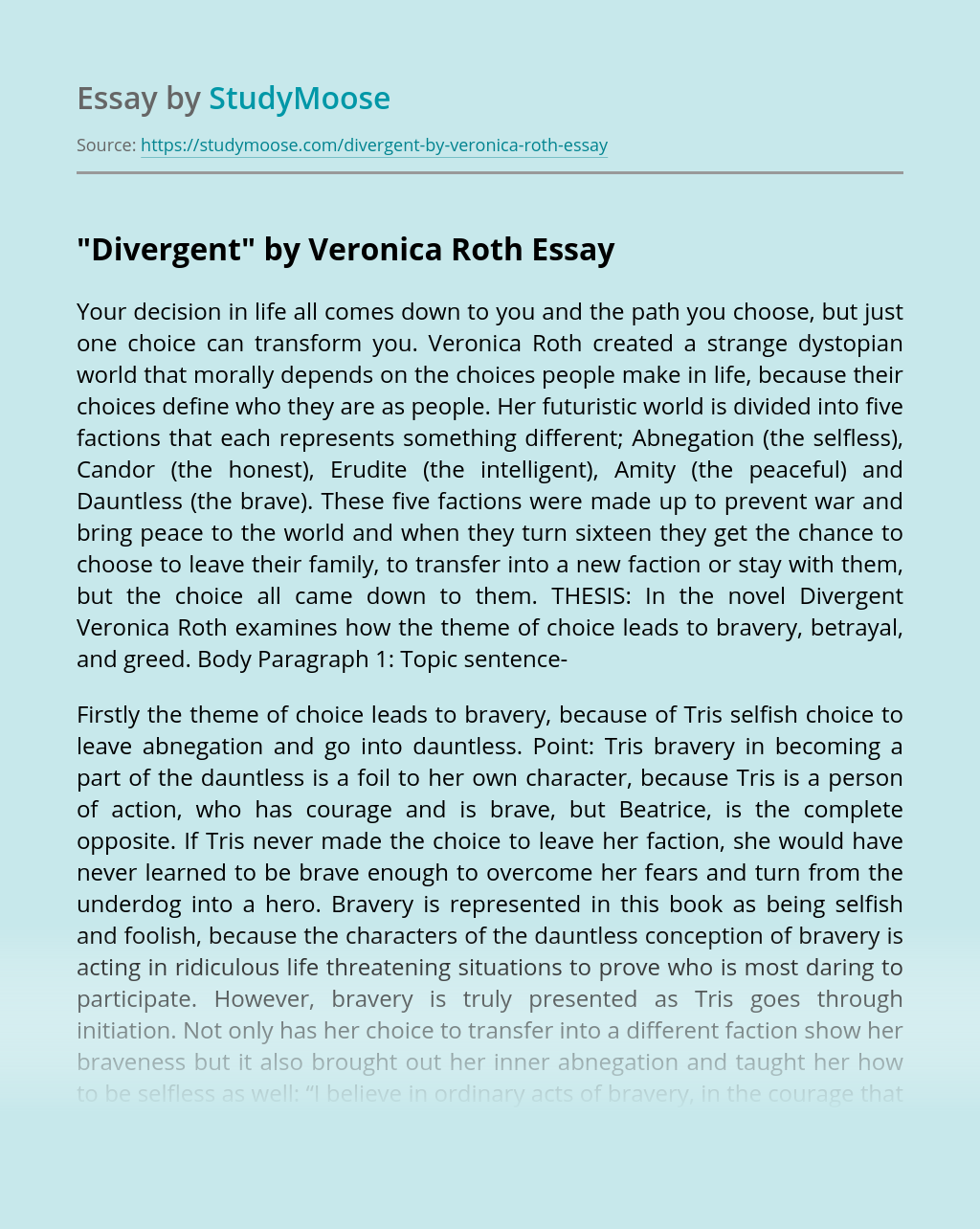