Sleep Is Important to a Human's Health

Turn in your highest-quality paper
Get a qualified writer to help you with
“ Sleep Is Important to a Human’s Health ”
Get high-quality paper
NEW! AI matching with writers

Getting eight hours of sleep per night, a student can have an improved performance in school. Students that get an adequate amount of sleep are more alert and focused during the day compared to students that don’t get enough sleep. Howard Taras from tnpc. com said, “In one study of 1,000 students (grades 9-12), 90% reported feeling groggy from lack of sleep.

That’s the finding of a study that included 56 teens, ages 14 to 18, who had complained of insufficient sleep at night or daytime sleepiness. Researchers measured the sleep of the participants, and the teens provided information on their grades. The study found an association between higher math scores and fewer awakenings at night.

“(Preidt) This study proves that when a student gets more sleep, that student scores higher on tests than that student would if they got less sleep. Stated by a reporter from medicaldaily.

com, “As part of the experiment, a Rhode Island school extended its opening time by 30 minutes – from 8 am to 8. 30 AM. After three months of the new timetable, school authorities found most teens not only happier and alert, but began scoring well. The teens also reported that they were getting about 45 minutes of extra sleep each night following the change in the opening times”(Medical Daily Reporter). This experiment shows that an extra 45 minutes of sleep each night can improve a teenager’s performance in school. A little bit of extra sleep can go a long way. The article Can Sleep Improve Your Memory?

from methodsofhealing. com, “Sleep enables a brain to store the information that people have learned more effectively, and if people dream, that information is stored even better. It does not mean, however, that people can learn and remember something new easily without the benefit of sleeping after learning the information”(Can Sleep). If a student is studying for an exam, the student will better remember the information by getting a good night’s sleep right after. The brain will store and process the information better that way. “We have no control over our brains while we are asleep.

The only thing that we can do is to make sure that we get an adequate amount of sleep – and hope that we dream while we sleep”(Can Sleep). Getting a good night’s sleep really helps anyone on tests. “To test the theory that you perform better after a nap, scientists showed volunteer participants how to find a specific structure in a 3D computer generated maze. The group was then split into three smaller groups which were all given different stimuli. The first was allowed to nap before trying the task again. The second was kept awake and allowed to try the task after some time.

The third group was allowed to sleep, but were woken up periodically to check if they were dreaming. The ones who reported that they were dreaming about the task were the ones who found the specific structure fastest”(Lashkari). This experiment proves that when an individual dreams about something specific, that individual remembers it better. “Two groups of participants in the study practiced a repeated motor activity which consisted of bringing the thumb and a finger together at a specific sequence. The research examined the “how” aspect of memory in the participants’ ability to perform the task quickly and in the correct sequence.

Getting the recommended amount of sleep, people have an improved memory. There have been many experiments done and there is research that proves this to be true. According to physorg. com, a recent study was done by Prof. Avi Karni and Dr. Maria Korman of the Center for Brain and Behavior Research at the University of Haifa. Sleep does Improve the consolidation or memory for recently encoded information. Sleep protects memories from disruption by the interfering experiences that are inevitable during wakefulness. The researchers found that a taking a ninety minute nap during the day can help speed up memory consolidation.

It’s thought that sleep helps your blood regulate stress hormones and helps your nervous system remain healthy. Over time, a lack of sleep could hurt your body’s ability to regulate stress hormones, leading to high blood pressure”(Sheps). this is proof that lack of sleep can lead to heart problems. Sleeping at least eight hours a night will help keep your heart healthy. According to an experiment done by scientists from the article Prevent Diabetes With a Good Night’s Sleep on thenakedscientists. com, people that get less sleep have a higher chance of getting type II diabetes.

“Esra Tasali and her colleagues at the University of Chicago Medical Center recruited nine healthy young volunteers and monitored their sleep. The subjects were rigged up to a monitor which played noise from a speaker whenever their brain waves showed that they had entered slow wave sleep, which is the deepest phase of sleep. The sounds were just loud enough to disrupt the subjects’ sleep, but without waking them up. This occurred about 250 times during the night for each subject and enabled the researchers to cut the amount of slow wave sleep amongst the volunteers by 90%. The effect is similar to ageing the brain by 40 years.

When the volunteers woke up each morning the researchers administered a small amount of glucose, intravenously, and then monitored blood sugar and insulin levels. The researchers were surprised to see that by the end of the study the volunteers had become 25% less sensitive to insulin and their glucose levels were 23% higher. The team point out that their findings might help to explain why obese and some elderly individuals develop type II diabetes”(Tasali) This experiment proves that people who don’t get enough sleep have higher glucose levels and are less sensitive to insulin, which could ultimately lead to type II diabetes.

Stibich said “When your body is sleep deficient, it goes into a state of stress. The body’s functions are put on high alert which causes an increase in blood pressure and a production of stress hormones. Higher blood pressure increases your risk for heart attacks and strokes. The stress hormones also, unfortunately, make it harder for you to sleep”(Stibich). When a person is sleep deprived, that person’s stress level increases and blood pressure goes up. All that person needs to do to reduce the stress is sleep. According to McCoy, the right amount of sleep can help control body weight.

“A recent study followed a group of 40- to 60-year-old women for five to seven years and tracked their weight and sleeping patterns. The researchers found that women who reported having trouble falling asleep, waking up frequently at night, or having trouble staying asleep were significantly more likely to have “major weight gain” (gain of 11 pounds or more)”(McCoy). Since people get energy from sleeping, people that don’t sleep as much aren’t going to have as much energy as people who get a full eight hours of sleep. McCoy proves that sleep helps control weight.

“Another study examined the eating and exercise habits of a group of young healthy men after sleeping for eight hours and four hours on two consecutive nights. The researchers found that the men ate significantly more (an average of 560 excess calories in their daily diet) during the day after they were sleep-deprived, compared to what they ate after having a good night’s sleep”(McCoy). This study proves that the less sleep a person gets, the more that person will eat throughout the day. As a result of getting an appropriate amount of sleep, a person may be able to control body weight issues.

How well a person sleeps links directly to that person’s appetite. People may skip the gym and go pick up fast for dinner because they are too tired. Individuals who sleep more have more energy and don’t need as much food. Individuals who sleep less have less energy and need to eat more food. People that get at least eight hours of sleep every night have a reduced risk of depression. Sleep is an essential part of life and people who get the recommended amount have less stress and anxiety. Stress also affects sleeping by making people more awake and alert.

Not enough sleep and also affect mood and mental states. It may make people feel angry, sad, and mentally exhausted. Chakraburtty said “An inability to sleep is one of the major signs of clinical depression. Another sign of clinical depression is sleeping too much or oversleeping. Having a sleep disorder does not always cause depression, but lack of sleep does play a role. Lack of sleep caused by another medical illness or by personal problems can make depression worse. An inability to sleep that lasts over a long period of time is also an important clue that someone may be depressed”(Chakraburtty).

Depression is more common in people who are sleep deprived. This is evidence that not enough sleep can lead to depression. The article Sleep Better, Stress Less on getmentalhealthy. com “While you sleep, your body is doing all sorts of things that your mind isn’t aware of, including healing, consolidating memory, recharging, growing and regenerating cells and discharging emotions (even stressful ones) through dreams. Needless to say, sleeping is definitely not a waste of time. If anything, it can be the most productive thing you do all day”(Sleep Better).

Sleeping is a way for people to give off emotions and release stress. In conclusion, my research proves that getting at least eight hours of sleep greatly improves your health. Well getting less sleep may allow you to have more hours in the day, but can lead to many health issues. People that get the recommended amount of sleep can perform better in school, have a healthier heart, have improved memory, have less stress and anxiety, and a reduced risk of diabetes and depression. Sleep effects your whole body.

Sleep Is Important to a Human's Health. (2016, Jul 13). Retrieved from http://studymoose.com/sleep-is-important-to-a-humans-health-essay 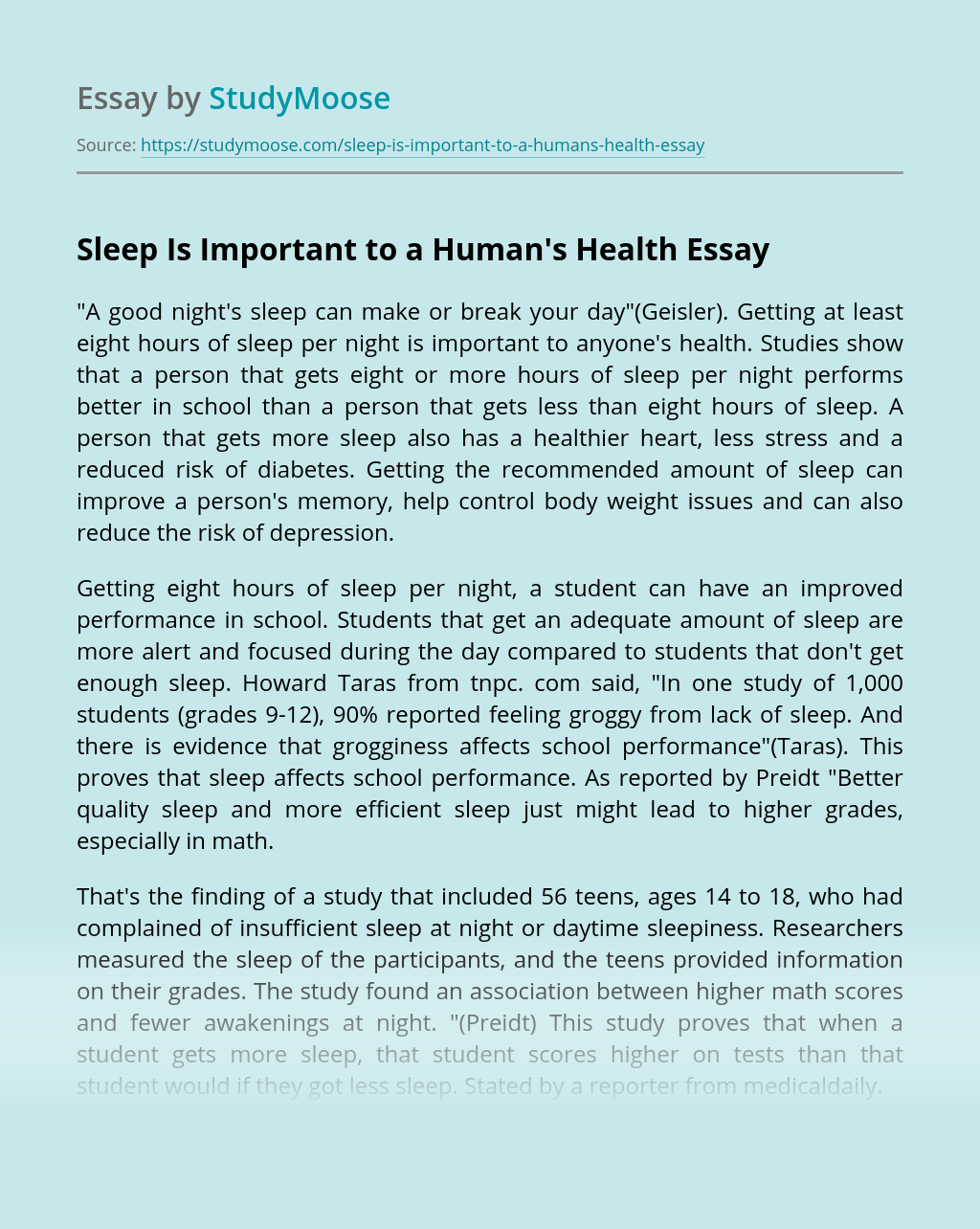 Turn in your highest-quality paper
Get a qualified writer to help you with
“ Sleep Is Important to a Human’s Health ”
Get high-quality paper
Helping students since 2015
Stay Safe, Stay Original