In the autobiography, “Incidents in the Life of a Slave Girl”, it tells the story of a female slave named Harriet Ann Jacobs. Losing her mother and father at such a young age, she experienced firsthand the account of a slave life. She deliberates in great detail the humiliation, sacrifice, and struggle specific to female slaves of the late nineteenth century. Though she understood the risks involved in publishing an account of her life, she moved forward with the idea and published her story under the pseudonym Linda Brent.

Don't use plagiarized sources. Get your custom essay on
“ Harriet Ann Jacobs ”
Get custom paper
NEW! smart matching with writer

Harriet Jacobs was born into slavery in 1813 in Edenton, North Carolina to Delilah and Elijah. While growing up she enjoyed a relatively cheerful life until she was six years old when her parents died. After the death of her parents, Harriet and her younger brother John were left to be raised by their grandmother, Molly Horniblow. Molly was an older woman who was well respected in the slave community, as well as by the slave owners.

She was never mistreated, and she frequently baked goods for the people in her community.

Harriet Jacobs gained the knowledge for all of her educational essentials from her first mistress, Margaret Horniblow. She taught Harriet how to read, write, and sew which gave her advantage over the rest of the slaves. It also would attract some unwanted attention. Margaret would later on will Harriet to her twelve year old niece whose father would subject Harriet to aggressive and unrelenting sexual harassment. Dr. Flint sexually harassed and physically abused the teenaged Harriet for as long as she was a servant in his household.

Afraid that one day Dr. Flint would make his antics reality, she began to have an affair with a prominent white lawyer named Samuel Tredwell, whom she later on beared two children for. Instead of discouraging Flint, she enraged him. He then sent Harriet away to a life of hard labor on a plantation he owned, threatening to break in her young children as field hands, seeing that they legally belonged to him. She soon ran away from the plantation and spent seven years hiding in a tiny attic crawl space in her grandmother’s house.

During those seven years she put to use the skills that her first mistress had taught her, and watched over her children through a small chink in the roof. Being cramped in the attic for so long, left her permanently physically disabled. In 1842, Harriet was finally able to escape to the north, and found work as a nanny in the household of a prominent abolitionist writer, Nathaniel Parker Willis. She later on is reunited with her children in New York, and farther down the line her employer purchases her freedom from Dr. Flint.

While reading this autobiography you acquire a feeling that is very unusual. Most slaves that you hear about usually have harsh lives and are extremely unhappy, but in this particular case it was the complete opposite. Harriet’s life wasn’t hard not one bit. She was never mistreated because her father’s mistress found her to be very appealing, and she didn’t have to do any hard labor. But, she also wasn’t allowed her freedom which is what she anxiously longed for. That particular entity is what places everything into perspective.

At the end of the day whether she liked it or not, she was still a slave. She could not walk away from her situation, she could not undertake everything that she wanted to do, and she definitely could not enjoy her life to the fullest because she belonged to someone, and that someone was a jealous, aggressive man named Dr. Flint. Harriet Jacobs insisted on telling her story honestly and completely, determined to make white Americans aware of the sexual victimization that slave women commonly faced and to dramatize the fact that they often had no choice but to surrender their virtue.

Jacobs knew that her contemporaries would see her not as a virtuous woman but as a fallen one, yet she published the story anyway. She wanted to bring light to a situation that slave women faced every day. She was an incredibly strong woman for doing so, and by directly confronting the cruel realities that plagued African American women in the late nineteenth century, Harriet’s work occupies a significant place in African American literary tradition. 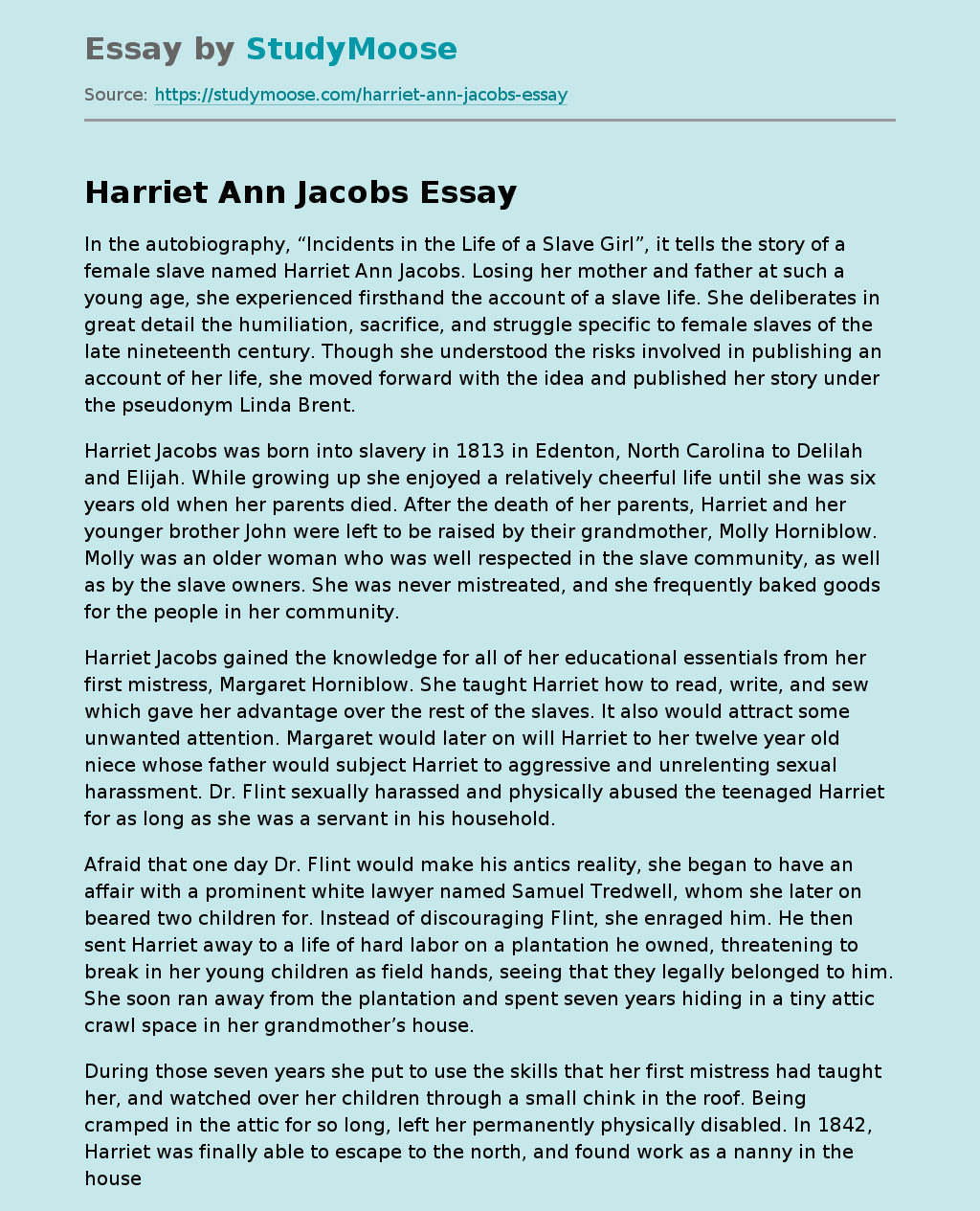