‘The Monkey’s Paw’ is one of W. W Jacobs’s most famous short stories. In ‘The Monkey’s Paw’, Jacobs uses many different types of tone, language, and many other devices that create a really good mystery story. At the beginning of the story, the language is calm for the inside of the house, ‘the blinds were drawn and the fire burned brightly. ‘ Shows that inside the house was a cozy atmosphere compared with the language used to describe the outside.

Don't use plagiarized sources. Get your custom essay on
“ The Monkey’s Paw by W. W Jacobs: Analysis ”
Get custom paper
NEW! smart matching with writer

The inside atmosphere is also made stronger than the dark atmosphere outside by the presence of the strong family unit.

Jacob’s language that he uses in this part of the story could be seen as normal, but actually be talking about the future, for example, ‘putting his king in such sharp and unnecessary perils’ can be seen as describing the game of chess but replace ‘king’ with family and it portrays the future. This family is in danger as Morris arrives.

Jacob’s language in the description and actions of Morris make the reader think of him as the outside invading, however, the family circle is not broken yet, ‘the little family circle regarding with eager interest this visitor from distant parts.

‘ Shows that even though the outside has invaded, he has not broken into the family circle, but the White family’s language towards him is kind, they are interested in him but their curiosity will break them apart. The family still try to distance themselves as they refer to Morris in the third person singular, like an outsider.

Morris turns everything around when discussion hits the monkey’s paw, the language Jacobs gives Morris manages to break and corrupt the family with the ways he talks about it,

‘ “Well, it’s just a bit of what you might call magic, perhaps” said the sergeant-major off handedly. ‘ This makes it look like Morris sees it as nothing, especially the ‘off handedly’ making it look like he tries to throw his words away, but it even greatly captures the family’s attention, making them want it more. The questions the family asks are questions the reader may be wondering themselves, Jacobs has managed to even further involve the reader as the reader is on the same trail of thought as the characters.

The atmosphere is tensioned with quick answers from Morris, the answers are not all unveiled adding to the suspense of the mystery. Morris also says something that will frighten the reader and make them want to read on, as the point is not brought up again for a while, ‘ “The first man had his three wishes, yes” was the reply. “I don’t know what the first two were, but the third was for death. That’s how I got the paw” This not only creates suspense and the read-on feeling, but also a suspicion that Morris may be dead too due to him having had his wishes. 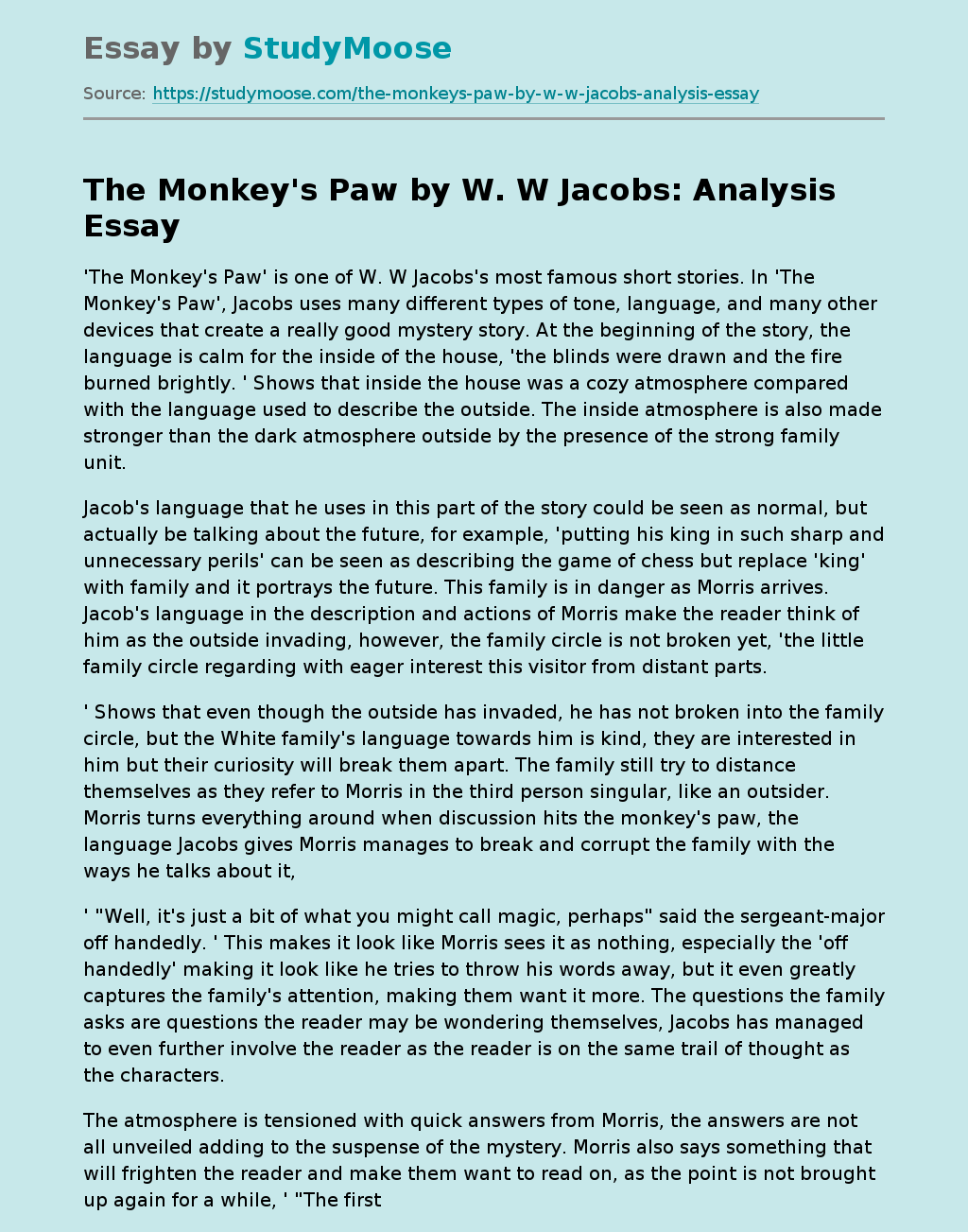