There are many techniques that are used to create tension and suspense in ‘The Monkey’s Paw’. From the very beginning we can see that the language used sets the scene and conveys the mood of the story; “the night was cold and wet”. Pathetic fallacy immediately implies that the story will be based on evil and creates tension as it intrigues the reader. We can see that the language used helps the story to become fast paced which contributes to creating tension and suspense.

Don't use plagiarized sources. Get your custom essay on
“ Tension and Suspense in the Monkey’s Paw ”
Get custom paper
NEW! smart matching with writer

We can also see that there are many words that create suspense by themselves; “the words died away on his lips”, “beastly”, “slushy”. All of these words used keep in with the Gothic genre that characters are described negatively and the descriptions of objects are negative.

The dialogue used also builds up tension and suspense:

‘As I wished, it twisted in my hand like a snake’

‘Well, I don’t see the money,’ said his wife

From this we can see that by having a section in dialogue, it heightens the tension at that point and quickens the pace of the story.

Furthermore, we can see that a simile has been used which helps the reader to visualise what Mr White went through. We can also see that the punctuation used in the story also helps to create tension and suspense, “What’s that?” By italicising the text, it adds emphasis onto it and shows the reader that the character is shocked and speaking in a raised voice.

This intensifies the tension and makes the reader want to read on to find out what happens.

Tension and suspense is also created through the use of sentences; “His wife sat up in bed listening. A loud knock resounded through the house.” By using short sentences, it adds pace to the story which aids the build up of tension and suspense. Furthermore, we can see that there is a contrast between sentence structures in key areas. When the tension and suspense is building to a climax, the sentences become shorter and sharper to create pace. However, directly after a climax, there is usually a period in the story where there is a descriptive passage which includes longer sentences and longer words:

There was an air of prosaic wholesomeness about the room which it had lacked on the previous night, and the dirty, shrivelled little paw was pitched on the sideboard with a carelessness which betokened no grief belief in its virtues.

Another way in which the author creates tension and suspense is by withholding information, “‘Well, it’s just a bit of what you call magic perhaps,'”. The way in which the monkeys paw is initially described intrigues and builds up suspense as not much is mentioned about the paw. Furthermore, we can see that tension and suspense is also created by delaying the delivery of key facts; “‘Badly hurt,’ he said quietly, ‘but he is not in any pain.'” By delaying the mention of the White family’s son’s death, it adds suspense and compels the reader to continue reading.

In the Victorian times, people where very superstitious and would have believed that the Monkey’s paw could actually have a magical effect. However, Jacobs contrasts this by having a rational family that has a cavalier attitude to the monkey’s paw. This would have created tension and suspense as the readers of the time would have known something bad was going to happen as the White family would have been seen as outcasts.

Tension and Suspense in the Monkey's Paw. (2016, Jul 15). Retrieved from https://studymoose.com/tension-and-suspense-in-the-monkeys-paw-essay 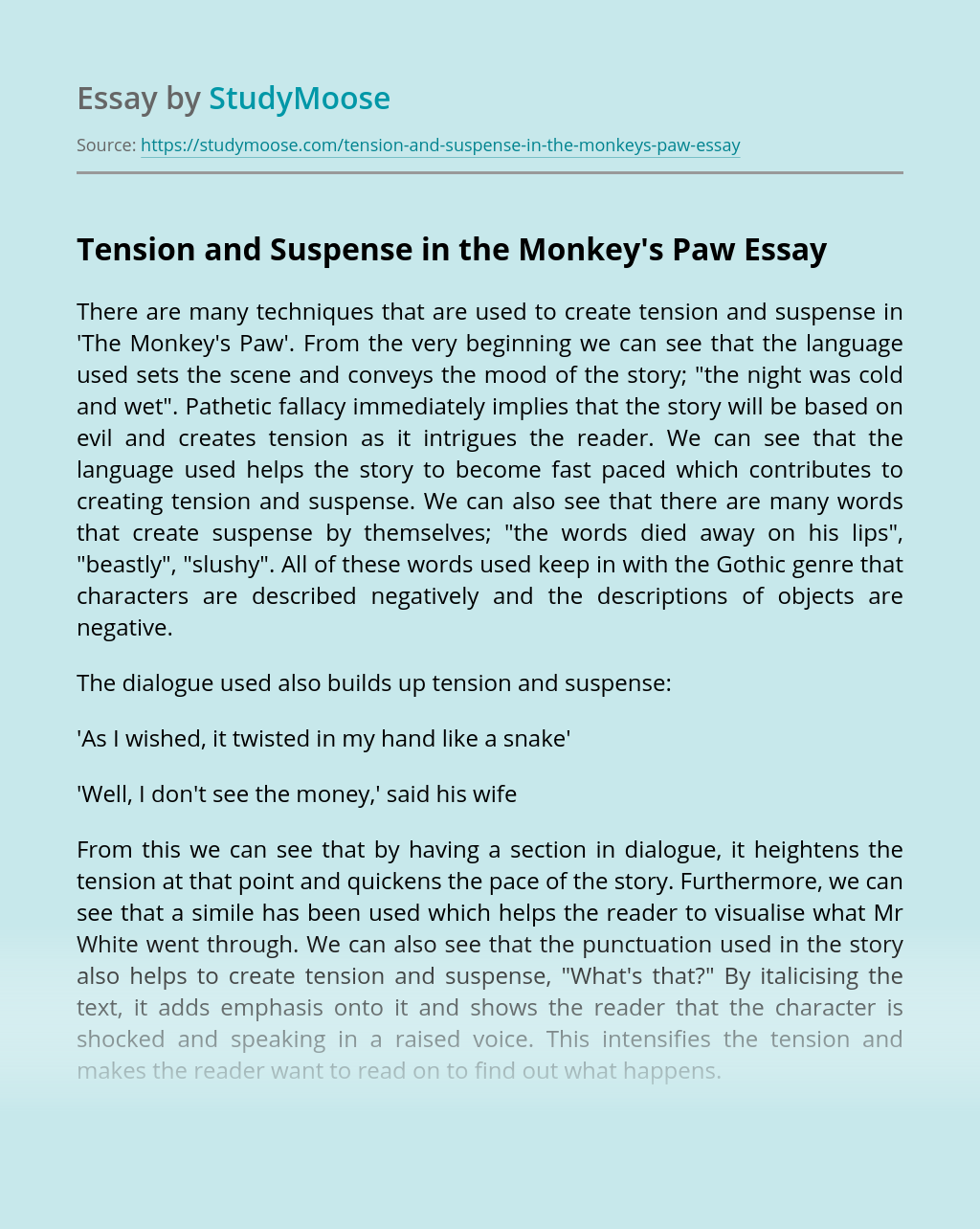