Simplicity is the key when it comes to the plot of a mystery story. Very few characters and not many sub-plots. If you have a complicated plot then the story is hard to follow and if there are a lot of characters then you can’t build up the readers pity or understanding of a single character ,which is how good mystery stories work. The author makes us understand a character so that when something happens to them we have come to know them and ether want something bad to happen to them if they’re a nasty character or you want them to get out of trouble if the character is likable.

Don't use plagiarized sources. Get your custom essay on
“ The monkey’s paw ”
Get custom paper
NEW! smart matching with writer

It is also possible that the author will aim to show us how a character can be changed by a traumatic or bad experience. It is therefore a bad idea to have many characters in a mystery story. “The Monkey’s Paw” has very few important characters. In this story we have only “Mr.

Proficient in: The Monkey'S Paw

White”, “Mrs. White”, “Herbert” and the “Sergeant-Major”. Because of this “The Monkey’s Paw” is a well written mystery story. We know “Herbert” well and of his strong bond with his mother. Because when he dies naturally we want to know how the mother copes.

We also no that the father is quite petulant at the beginning of the story he tries to distracted his so who is about to beat him at chess by saying “Hark at the wind”. This show that he is childish as he doesn’t want to loose a game to his son.

Also at the start “Mrs. White” is in control and is in charge. She knows how to treat “Mr. White” like when he looses the game of chess she says “Never mind, dear” then “perhaps you’ll win the next one. ” At the end of the story these rolls are reversed and “Mr.

White” has to control his wife who has gone mad at the lose of her son. When “Mrs. White” asks for “Mr. White to wish their son alive her warns her that it would be “foolish and wicked” this is an odd thing to say about bringing ones son back from the dead but “Mr. White” has realised that which would knock on the door and how unlike his son it would be. He also knows that the sight of this would destroy his wife. “Mrs. White” has gone mad and will stop at nothing to got her son back. She commands her husband to “Wish!

” which show her frustration and how desperate she is. This swap of character rolls is effective but only worked because we knew the characters and because the story never moved from them we could see it happening through the story. This is one of the things that makes a good mystery story. This slow change of characters is also part of the tension building in a mystery story. The tension in a mystery story is like the sea and the shore. It builds up and then goes down again but makes slow progress to reach the top of the beach or the climax of the story.

No author could hold the tension at 100% all the time so this is very effective and this occasional drop of tension is were the reader gets to think what is going to happen to the characters. In “The Monkey’s Paw” the tension is built up and then drops in a similar way. There are four tension spot in the story and they are the three wishes and the news of “Herbert” dying. Some thing else that adds to the tension of this story is that it is set in a remote place.

The pathetic fallacy is also interesting, the weather is bad, “cold and wet” and windy as “Mr. White” says “Hark at the wind. ” Mystery stories are regularly set in secluded areas and contain pathetic fallacies. The reason for this is to build up subconscious tension due to the fact that we know that if help is needed that there won’t be any. The pathetic fallacy is there to create an atmosphere and to make the event seem worse. This is very subtle which makes it a good tactic to write a good mystery story.

In “The Monkey’s Paw” they live in one of the “out-of-the-way places” which means that the story is more believable and more scary. There is no one to notice a walking corpse knocking on the door and there is on the other hand no help or comfort. It also make any visitors more blatant because it is abnormal. The language used by the author has a big impact on the reader and story. “The Monkey’s Paw” has a few well chose adverbs such as “hastily”. The speed shows that something wants to be hidden and makes us want to know what is hidden.

The choice of the noun “death” when talking about the wishes show the consequence of the other wishes which must have been bad. This makes the reader wonder whether the same will happen again. Speech can add to a mystery story as well. The three simple words ” Two hundred pounds. ” that are said have such a massive effect that it in a way shocks the reader. In shot the things that make a good mystery story are a simple plot focusing on one or two things with red herrings. This give ample place to present the characters.

The characters and their development are the main thing in a mystery story. The location and pathetic fallacy are important to building a subconscious belief of vulnerability. Speech and reaction to that are a key point in the development in the characters which is helped by the use of good nouns verbs and adverbs. Show preview only The above preview is unformatted text This student written piece of work is one of many that can be found in our GCSE Miscellaneous section. 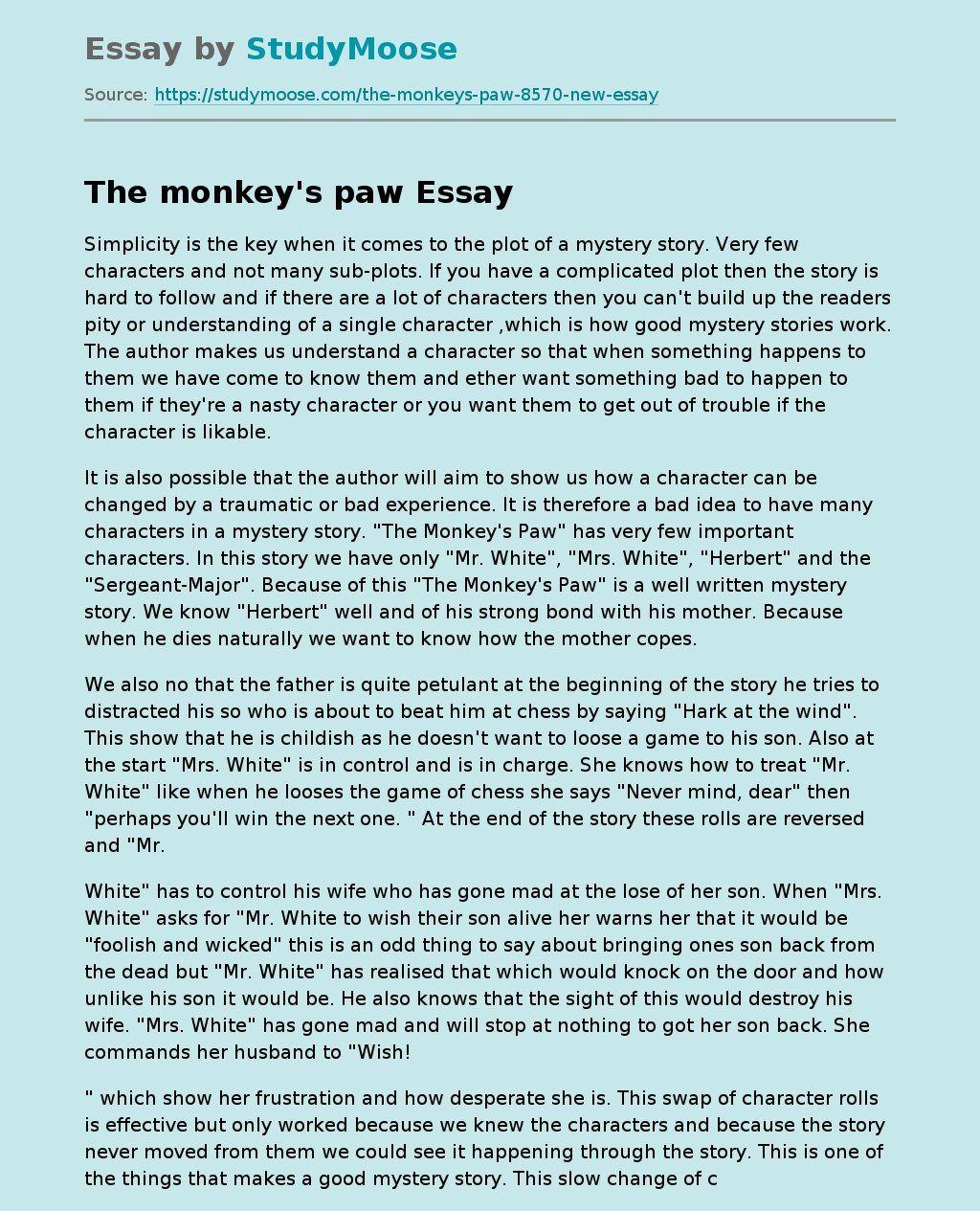