This essay is an analysis of ‘The Monkey’s Paw’, a horror short story by William Wymark Jacobs. This story is about a talisman that shapes like monkey’s paw which has magical powers. It grants three wishes to its owner. It’s given to one family, husband, wife, and their son. They wish for some money, and that wish also become true, they get the money, the exact amount they wished for. But actually that money was the compensation for the death of their son that caused by the accident.

Don't use plagiarized sources. Get your custom essay on
“ The Presence of Horror and Fear in ‘the Monkey’s Paw’ Story ”
Get custom paper
NEW! smart matching with writer

Torturing by the sadness of the dead of her only son, the wife wishes for her son back to life again.

There are many ways how the horror and fear is delivered in this story, but this essay will only take and explain three of them. The first thing that brings horror and fear is the background of the Sergeant-Major Morris as the previous owner of the talisman, how he could get that talisman.

The reader can feels that the talisman has a mysterious background from how the Sergeant-Major feels uncomfortable when telling about the talisman. “The soldier regarded him the way that middle age is wont to regard presumptious youth.

”I have,” he said quietly, and his blotchy face whitened. ” It can be seen that the Major seems too quiet and too afraid for the man that wants to tell the story about the talisman that can granted wishes. Second, the horror and fear come up to the climax through the action or response the husband and wife after the death of their son.

The fight between the husband and the wife about the wish to revive their only son also bring the reader feels the horror and fear. “The old man turned and regarded her, and his voice shook. “He has been dead ten days, and besides he – I would not tell you else, but – I could only recognize him by his clothing. If he was terrible for you to see then, how now? ”” it brings the readers get the imagination how scary in looks if the son come back to life. The last thing that is, how the narration also supports to create a horror and fear atmosphere in the story.

The best example can be seen from the last event. But her husband was on his hand s and knees groping wildly on the floor in search of the paw. If only he could find it before the thing outside got in. A perfect fusillade of knocks reverberated through the house, and he heard the scraping of a chair as his wife put it down in the passage against the door. He heard the creaking of the bolt as it came slowly back, and at the same moment he found the monkey’s paw, and frantically breathed his third and last wish. ” The narrations which explain about the setting, the situation and condition also take an important role to raise the tension of fear in this short story.

In sum, there are many ways of how the speaker is delivered the horror and fear of this short story. Three of them are: The background of the Sergeant-Major Morris as the previous owner of the talisman, The action or response from the husband and wife about the wish to revive their son, How the narration explain the setting, situation, and condition in this story with a ‘spooky’ ways. There are still many others ways how the speaker brings the horror and fear in this story that make this story become a good horror story.

The Presence of Horror and Fear in ‘the Monkey’s Paw’ Story. (2016, Oct 18). Retrieved from http://studymoose.com/the-presence-of-horror-and-fear-in-the-monkeys-paw-story-essay 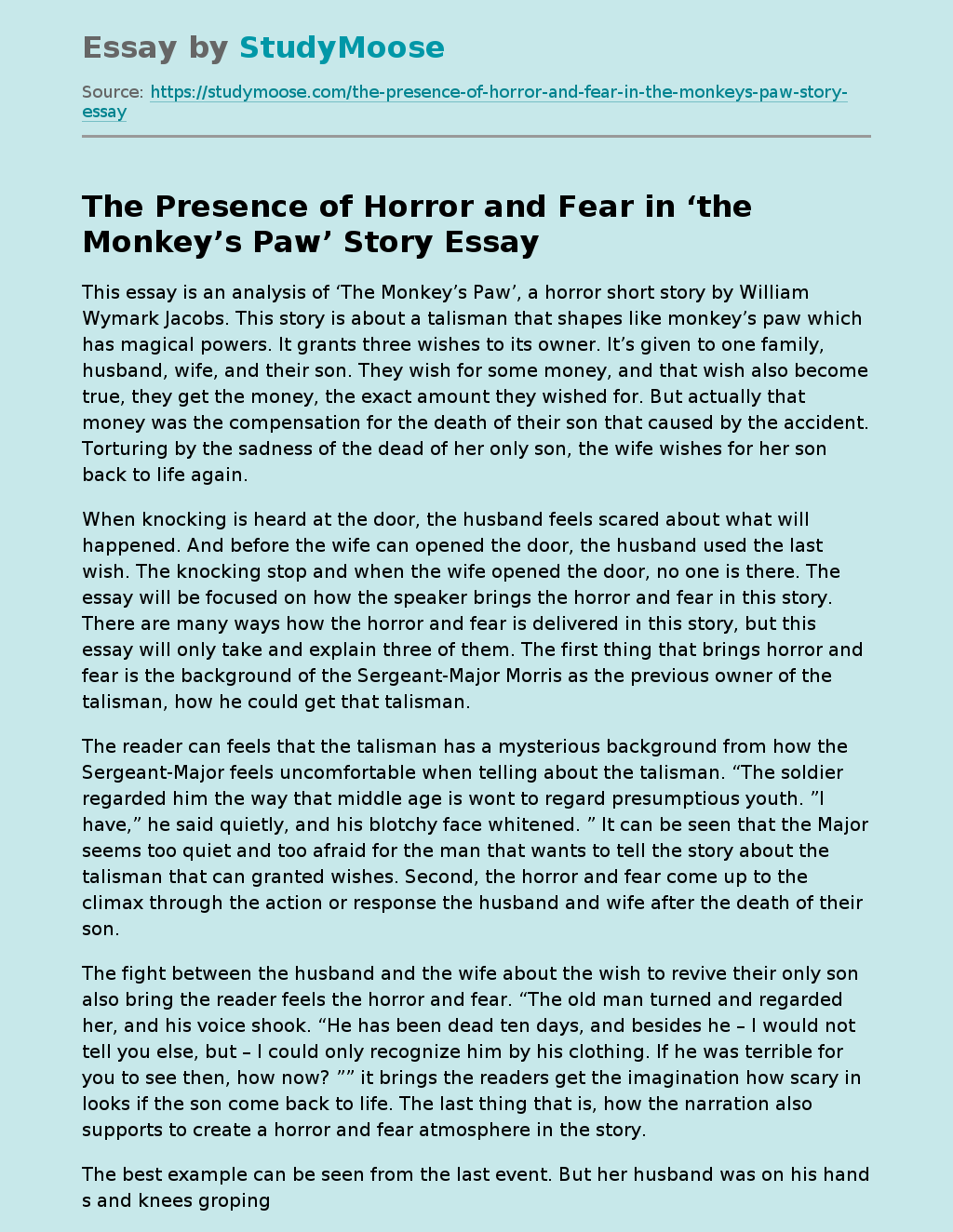