Incidents in the Life of a Slave Girl were a powerful novel that was used as a huge icon in favor of feminism where feminism was not seen as a movement yet. It caused a lot of negative attention to the author, Harriet Jacobs in 1861. This narrative of her life established that of the many difficulties that came with being a slave in a time where slavery was widely accepted. She was a very young woman who was unfortunately born into slavery and forced to follow the rules and regulations of a white man who immediately decided to pursue her sexually against her will.

Don't use plagiarized sources. Get your custom essay on
“ Feminism in Harriet Jacob’s Incidents in the Life of a Slave Girl ”
Get custom paper
NEW! smart matching with writer

Again, this is a time where African Americans and even worse, women, were not given any rights to be seen as equals or anything close to equals, so a slave being sexually harassed was seen as a joke to many and no one believed such a thing was moral.

She continuously explained that there are no slave owners that are “good” as they get too attached to the idea of power and corrupt the point of slavery completely.

It definitely highlighted the worst parts of living in an era in time where everything that happened then, is completely illegal in today’s world. This novel has a huge emotional aspect to it which makes the complete point of the book to make those reading it, feel sympathy toward anyone that had to go through such a difficult amount of years in their life. To read a book full of gruesome stories that one would only imagine would be an exaggeration and to later find is just the truth is hard to comprehend but amazing to see that throughout all the struggles Jacobs had to conquer, she never let her guard down and maintained her way of being a woman without allowing anyone to violate her as well as being strong through it all.

According to another novel written by William Grimes in 1825 called Life of William Grimes, A Runaway Slave, he suffered through similar tragic experiences as Harriet Jacobs in the time of slavery. They both published their own versions of experiences that happened to them as they were unfortunately born into an era of slavery relatively around the same time period. In this novel, William Grimes states that his master severely beat him with an umbrella and describes the pain as agonizing and excruciating. The only way he saw to help him get out of this situation was to run away from his owner before it got out of hand and the situation got worse than it already was.

There were significant differences between how male slaves and women slaves were treated during this time. Slave masters were known to be treating women like objects and using them for their own pleasure and even eye candy. According to Incidents in the Life of a Slave Girl, Harriet Jacobs states that “slavery is terrible for men, but it is far more terrible for women.” Throughout the novel, Jacobs does a great job explaining the several amounts of abuses that women go through as slaves that men do not. It is clearly stated throughout the novel that even as slavery was a very difficult endeavor for many during this time period, it was particularly more challenging for women because of the fact that they soldiered through struggles with their own mentality caused by the high amounts of sexual harassment between slave and owner and the huge risk of losing their children completely.

According to the primary source on getting a $200 reward from 1847, it shows how far people that were slave owners would go in order to get back their property, which is practically how these owners look at their slaves. Many slave owners viewed slaves as the more they have, the richer they are. Others respected those that had many slaves rather than those that did not have many. In today’s day and age, African Americans are not treated nearly the same as they were during this time. It is amazing to see how far our society has come in order to better our environments and finally realize how equal we all are in the first place.

In conclusion, the differences in the way men and women were treated like slaves during a pro-slave era in our country are unbelievable. Women had to deal with the many white men that decided they wanted to pursue them for pleasure without regard to their own wives and even birthed children that were then even forced into slavery as well. These women never really got the chance to see their children either or they were sold to other slave owners. Men, on the other hand, were seen as people who can handle a beating and received a lot of physical torture rather than mental. It was, of course, hard for both men and women. No one would like to be completely under the control of one person, but there are certain situations that make the circumstances differ from one another.

Feminism in Harriet Jacob's Incidents in the Life of a Slave Girl. (2020, Oct 30). Retrieved from http://studymoose.com/feminism-in-harriet-jacob-s-incidents-in-the-life-of-a-slave-girl-essay 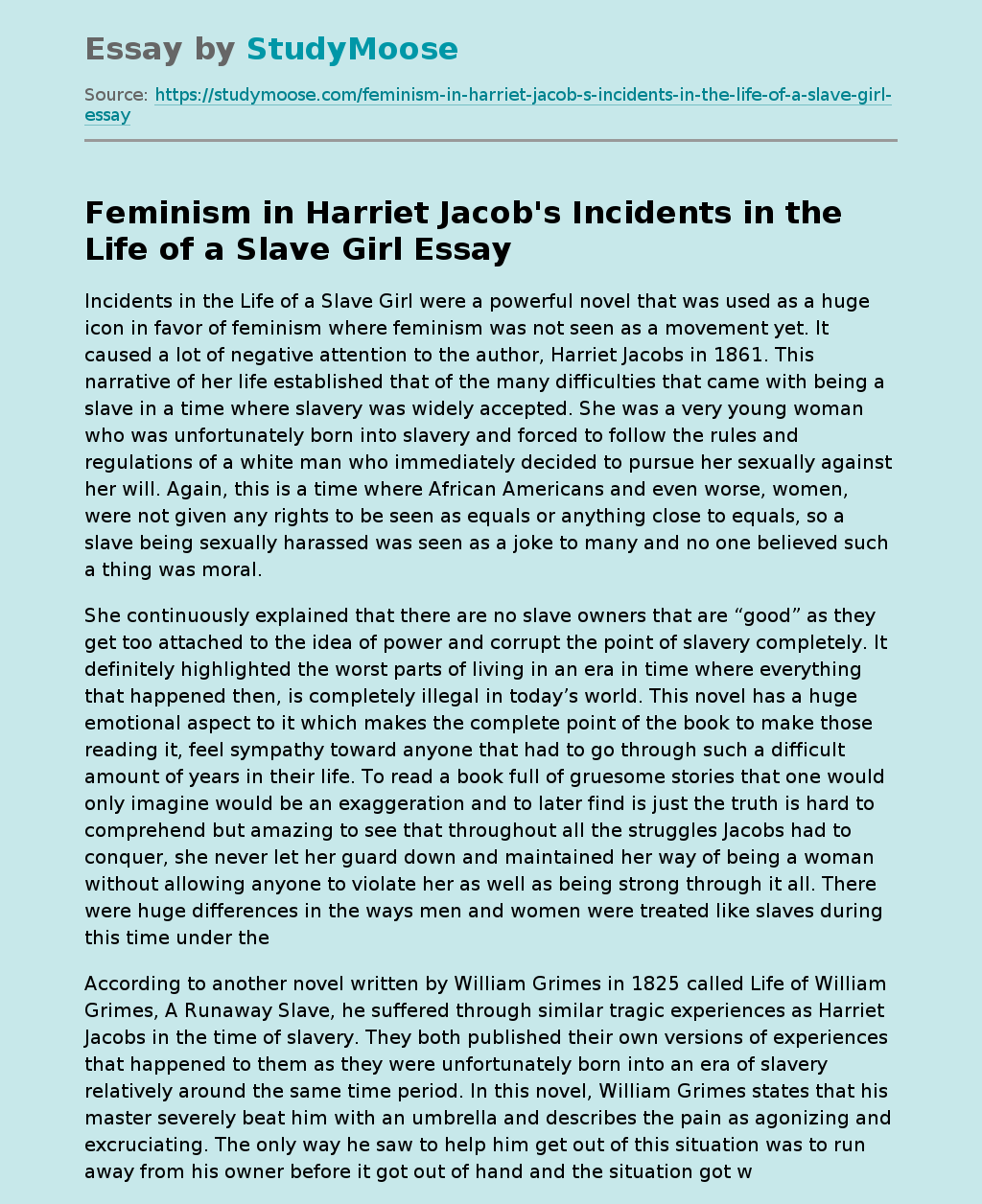