Incident of the Life of a Slave Girl

The autobiographical narrative “Incident of the Life of a Slave Girl” unveils casualties of life faced by black women during 19th century. A special attention Harriet Jacobs gives to a sexual relationship with Mr. Sand and moral values of black women. Thesis An “illicit” sexual relationship with Mr. Sand described in the Narrative does not reinscribing the stereotype of the black woman as lascivious and hypersexual, but proves that the black women are loving and sympathetic creatures seeking for a relationship based on romantic love.

Don't use plagiarized sources. Get your custom essay on
“ Incident of the Life of a Slave Girl ”
Get custom paper
NEW! smart matching with writer

Love and romantic relations between a man and woman has played a crucial love in their lives. For Linda Brent, an “illicit” relationship with Mr. Sand means pure relations free from social statuses and financial gain. Harriet Jacobs stresses that love and passion are typical for the black woman even if she is engaging in the “illicit” sexual relationship. As the most important, Harriet Jacobs underlines that the black women could not move beyond the constrictions of the ideology.

The existence of the institution of marriage, in which men played the dominant role and wielded control, placed women at the mercy of their male counterparts. At the beginning of new millennium, there are more and more people who prefer not to get marriage, but living together for many years trying to keep or preserve their personal freedom and independence. The example of Linda Bret shows that in spite of all the negative life lessons Linda understands what it is to be an individual and loving woman.

The autobiography portrays that the black women are not promiscuous or lascivious, but loving and sympathetic creatures. In this case, it is important to take into account the epoch and economic system of slavery which deprived black women their rights and freedom. Linda Brent is a person who uses love as her emotional guide. But love symbolizes psychological state of Linda who becomes more passionate and sympathetic.

The problems, unveiled in the autobiography, are received much publicity, because for some people these problems are too intimate or dedicated, they touch personal feelings and human soul. Linda Brent is suppressed by the norms and circumstances, her own narrow worldview and personal low spirits which make her dependant upon life situations. One of the secrets of Linda Brent is her natural beauty, which lies in the way she perceives the world.

Through the character of Linda Bret, Jacobs depicts that that to the black woman who had survived the illusions that freedom and marriage would provide lifelong companionship and identity, and who had come to recognize the existential solitude of all human beings, feminism became a kind of credo. For the black women love means dream which comes true. In this sense, she is a victim because she needs to escape from realities of life which she cannot change.

She is a victim of social structure and class conflict which destroy human relations and hopes. The autobiography suggests something of the historical loss for women of transferring the sense of self to relationships with men. Her sexuality is still her life, just as it made her on the pillory superior to her disclosed lover. Jacobs associates shame over her ancestors with the guilty excitement she felt in taking up the story. Her love throughout is maternal compassion for what is vulnerable to the passage of time. But her mind does not recoil from such pain; Linda Bret never avoids disquieting realities. But it is precisely an indiscriminated change, this stream of undifferentiated ran­dom perceptions, which is called “life”.

The “illicit” sexual relations create a feeling of guilt being one of the reasons that her sexual freedom does not take her very far. It is possible to say that despite their efforts to escape the rituals of femininity, the black women seems fated to reenact them, even though, as Jacobs recounts these scenes and revises their conventions. The values and nature of black women described by Jacobs are not lascivious or hypersexual. Modern values and realities of life support behavior and choice of Linda who wants to love and be loved.

Incident of the Life of a Slave Girl. (2017, Apr 06). Retrieved from http://studymoose.com/incident-of-the-life-of-a-slave-girl-essay 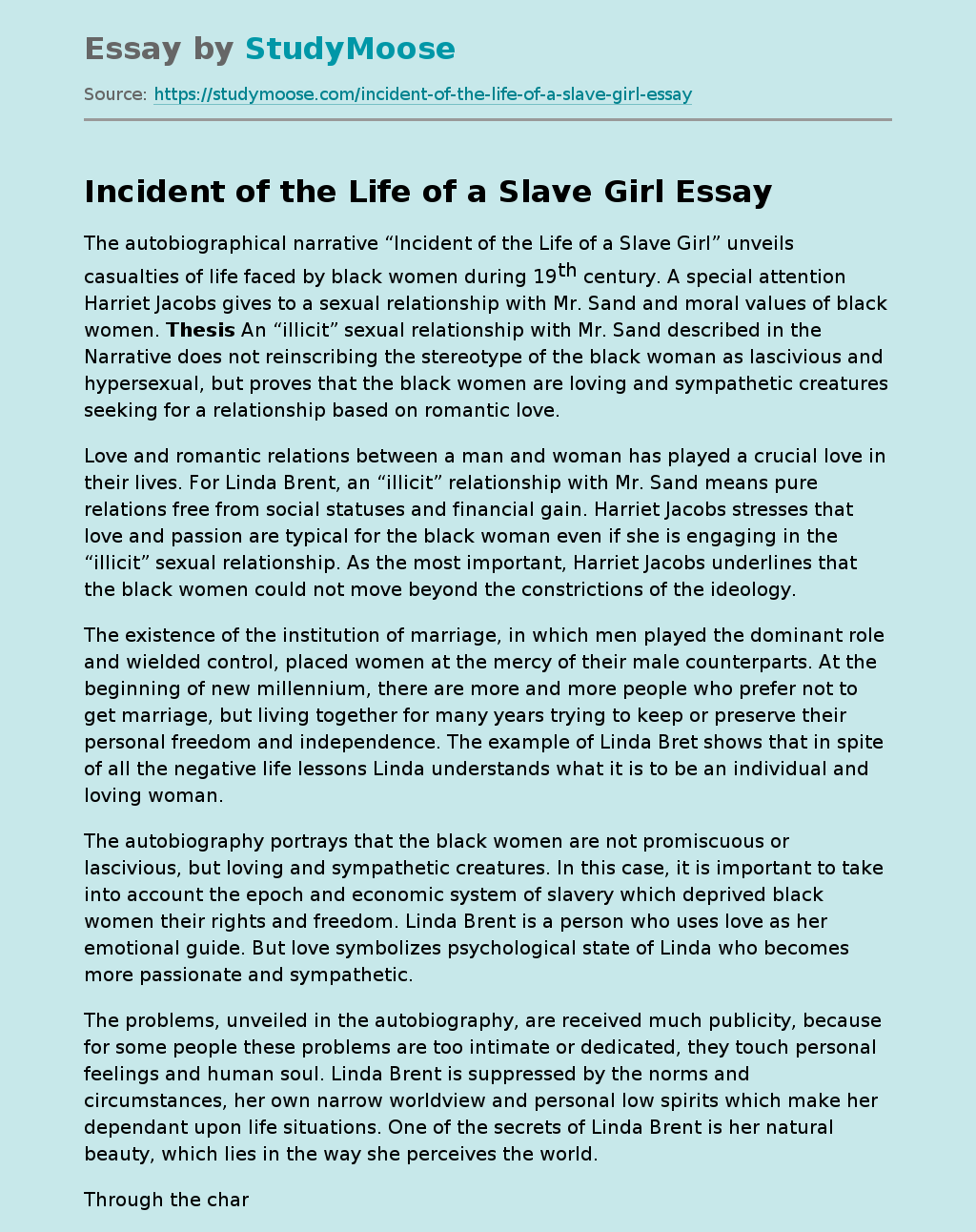